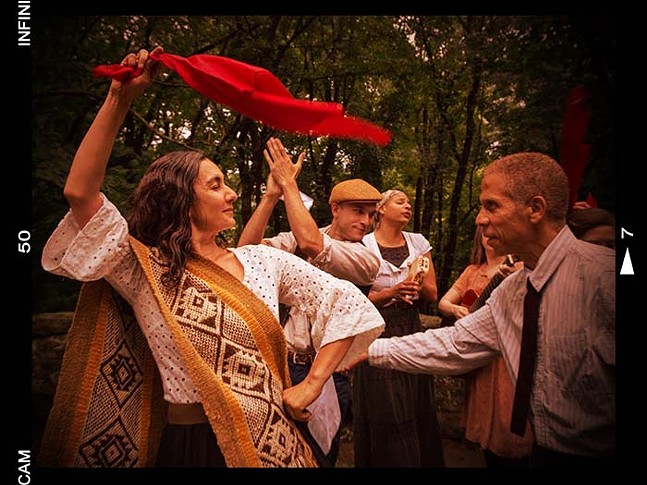 Photo: Heather Mull // Processing by BOOM Creative
Carolina Loyola-Garcia, Jerreme Rodriguez, Kelsey Robinson, and Eugene Perry in Quantum Theatre's Looking for Violeta
Quantum Theatre has done plenty of shows outside in the elements over the years, but this is the company's first time putting a barrier between the performers and the sky.

It’s not because they’re afraid of the weather, says Karla Boos, the group’s artistic director and director of the world premiere of Looking for Violeta, Quantum’s new musical about the life of Chilean musician Violeta Parra. The Frick Park tent where the group is staging the show represents an authentic peña, a meeting place where Parra and her companions would gather not just as musicians, but as activists seeking to end the oppression of dictatorships in Latin America.

Parra’s music was crucial to the development of nueva canción, the folk-inspired musical genre associated with activism in Latin America and the Iberian Peninsula in the second half of the 20th century. Her most famous song, “Gracias a la Vida,” came to Americans through Joan Baez, who recorded a cover in 1974.

“Violeta was really the mother of that new wave of music,” Boos says. “It became really associated with the '60s and '70s and all the activism that swept through Latin America to try and resist the dictatorships that were very prevalent at that time.”


Carolina Loyola-Garcia stars as Parra in the show, a collaboration between composer Emily Pinkerton and Chilean playwright María José Galleguillos, who joined planning sessions for the musical via Skype from her home in Santiago, Chile. Told through the eyes of Parra’s brother Nicanor (Eugene Perry), the show takes its audience through Parra’s story as Nicanor attempts to understand why his sister eventually took her own life.

Boos calls the show a “folk opera” and compares its musical style to this year’s Tony Award winner Hadestown. Pinkerton, an ethnomusicologist and an expert on Parra, pays homage to Parra through original folk music that blends singing with rhythmic, rhymed speech that’s closer to rap.

“She is an expert on what Violeta did, which was go into the people in the fields, the working-class people of Chile, and find this music that really reflected their origins,” Boos says.

Parra’s style of music, she adds, bears traces both of Andean music and “troubador”-like elements brought to Latin America in the time of the conquistadors. Pinkerton has incorporated several uniquely Chilean instruments into the score of the show, including the 25-string guitarrón chileno.

When Parra’s own music does appear, late in the show, it’s shortly before she ends her life. “‘Gracias a la Vida’ is her final song, written very close to her death, and it’s a song full of her love of life,” Boos says.

Looking for Violeta is a story about a suicide, but it’s not a sad one. Boos thinks we have a lot to learn about life from Parra. “She shows the world that you actually can have an effect through art.”