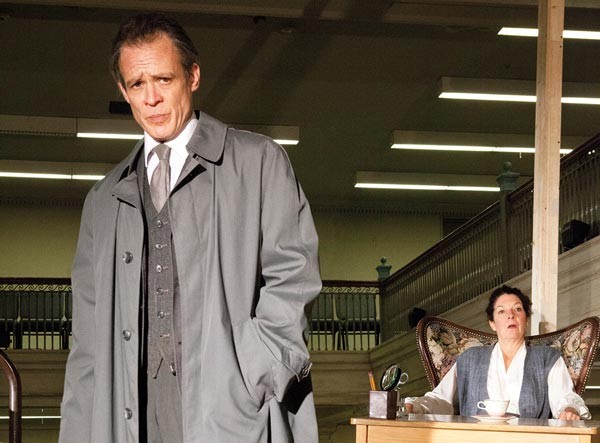 Photo by Heather Mull
James FitzGerald and Bridget Connors rehearse for All the Names.

Ever since she staged Knives in Hens in the Mattress Factory's basement, in 1998, Quantum Theatre's Karla Boos has considered the North Side museum's founder, Barbara Luderowski, a mentor. Seventeen years later, the two are collaborating on Quantum's new show — an immersive adaptation of Portuguese novelist José Saramago's Nobel Prize-winning All the Names.

Luderowski is widely admired for the Mattress Factory, the internationally acclaimed museum of installation art she founded in 1977. And she's less known for her collaborations than for doing things her way. Moreover, when Boos first suggested they create a stage adaptation of All the Names, says Luderowski, "I could not sit still long enough to read [the novel] without losing my mind. It's an incredibly complex thing."

One audio version later, Luderowski calls it "a beautiful book." And if Luderowski finds irksome theater that chains you to your seat, she's helping turn All the Names into a show that won't.

Saramago's 1997 novel follows Senhor José, a humble clerk at a vast registry of the dead and the living, on his unlikely quest to find a mysterious woman. Its English translation, by Margaret Jull Costa, suggests an ironic fable, part Borges, part Kafka.

Ever-itinerant Quantum is staging its adaptation in the long-empty, historic, city-owned Carnegie Free Library of Allegheny City (adjacent to the New Hazlett Theater). Audiences will be guided by lights, sounds and other means through several rooms where the action takes place. One high-ceilinged space with a railed mezzanine employs both seated viewing and a chance to explore multiple tableaux, many invoking the bureaucracy that engulfs José. In a theatrical twist, the four-member cast includes dual embodiments of José: one verbal (James FitzGerald), one silent (Mark Conway Thompson).

Quantum's adaptation has no "playwright"; instead, it's credited to an eight-member team led by Boos and Luderowski, and including video designer Joe Seamans and theater designer Narelle Sissons. The production is supported by a $35,000 Investing in Professional Artists grant from the Pittsburgh Foundation and the Heinz Endowments. The installation-like sets — including one that suggests a cube floating in a void — were heavily influenced by Luderowski, and what she learned doing theatrical design. "I love solving problems," she says. "I like stirring the pot. Because out of that comes something."