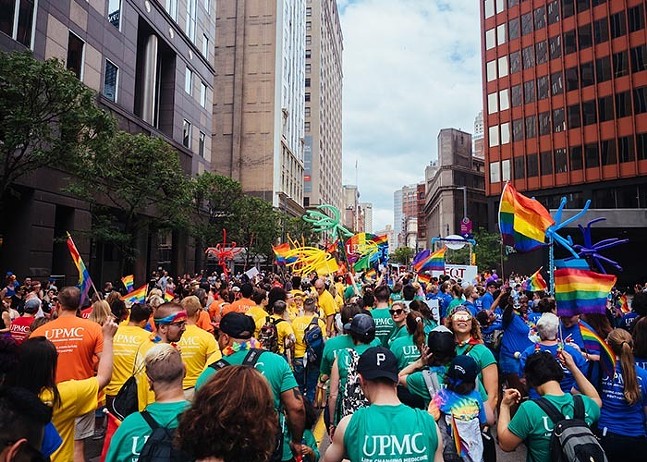 Photo by Jared Murphy/Pittsburgh City Paper
Liberty Avenue during the 2019 Pittsburgh Pride Equality March
Pittsburgh Pride, an annual celebration meant to uplift the local LGBTQ community, has seen more than its fair share of tumult related to its former organizer, the Delta Foundation. Between the outcry over lack of representation in its ranks, the controversial choice of musical acts, and the resignation of its former leader, as well as vendors calling for refunds after the 2020 event was canceled due to COVID-19, Pittsburgh Pride has almost constantly been mired in strife.

And it doesn't end there. In September, Pittsburgh City Paper reported that the Delta Foundation filed a patent trying to trademark the term “Pittsburgh Pride,” nearly a year after they announced plans to dissolve in August 2020. Now, some in the community are intending to challenge the trademark request.

On Wed., Sept. 22, QBurgh — a website described as a source for “LGBTQ news and community resources in Pittsburgh and Western Pennsylvania” — filed an extension request to challenge Delta's trademark proposal. That extension was granted.

According to QBurgh's Instagram, they "filed with the United States Patent and Trademark Office a request for an extension of time and registered its intent to oppose the trademark application for ‘Pittsburgh Pride’ by the Delta Foundation of Pittsburgh, Inc."

The post came with a news entry on the QBurgh website, complete with a copy of the filing. The filing is not a direct challenge to the trademark, but QBurgh is intending to file a full challenge and hopes others in the community will do the same.

Jim Sheppard, co-creator of QBurgh, says a community member made QBurgh aware in June of Delta’s pending application for the trademark of "Pittsburgh Pride," as well as "Pittsburgh Pridefest." Sheppard used to serve on Delta's board, and served as intermin president for a period of time shortly before the organization reportedly dissolved.

“It's offensive to generations of LGBTQ Pittsburghers that the Delta Foundation claims or believes that they own Pittsburgh Pride which has been celebrated since 1973,” says Sheppard, referring to the first, small Downtown march that happened about 50 years ago. Delta was formed in 1996 and started organizing Pittsburgh Pride in 2007.

QBurgh's filing comes within the originally allowed window, which states that any opposition to Delta's trademark had to be filed 30 days after Delta’s applications were published on Aug. 24. But now, an extension of opposition has been granted, according to QBurgh, allowing others to challenge Delta's trademark request until Oct. 23.

Sheppard adds that many in the Pittsburgh LGBTQ community “expressed outrage when the news broke that Delta was attempting this, and as the deadline approached, we felt that someone needed to take action so we did.”

He stresses that the Delta Foundation, and “the people behind this attempted registration,” have “a long history of causing harm to the LGBTQ Community of Pittsburgh.” Like others, he was convinced that Delta was gone after they officially announced their dissolution, with then-president Marty Healey citing a loss of funds due to the cancellation of the 2020 Pride, which generated nearly all of the organization's annual revenue.

After the announcement, other organizations have stepped in to take over or create new Pride events, including TransYOUniting and SisTers PGH. SisTers PGH even promises an event called "The Return of Pittsburgh Pride" set for 2022.

Sheppard says that, besides QBurgh, he is “aware of a few groups and group collaborations that are discussing the possibility of filing opposition as well.” He adds that QBurgh has retained legal counsel to guide and advise them through the process of opposition, and while he recommends others do the same, he understands that the move is not possible for everyone.

“Anyone can file opposition but to make the best legal arguments, counsel is advisable,” says Sheppard. “That is another reason why QBurgh chose to move forward with requesting the extension and opposition. Legal counsel can be expensive and out of reach to many folks and smaller organizations, especially those that have been most harmed by the actions of the Delta Foundation.”

Regardless, Sheppard believes anyone threatened by Delta’s ownership of “Pittsburgh Pride” should look into filing an opposition. Sheppard promises that QBurgh “will take all legal action and seek any legal remedy” to prevent the Delta Foundation from exclusively owning “Pittsburgh Pride,” implying that the trademark could have dire consequences for the local LGBTQ community.

“The real question is what does the Delta Foundation plan? To sue anyone who uses the term Pittsburgh Pride?” says Sheppard. “Just more harm done to the community.”