Built from a store of family recipes, the menu is broader than is typical for a barbecue place 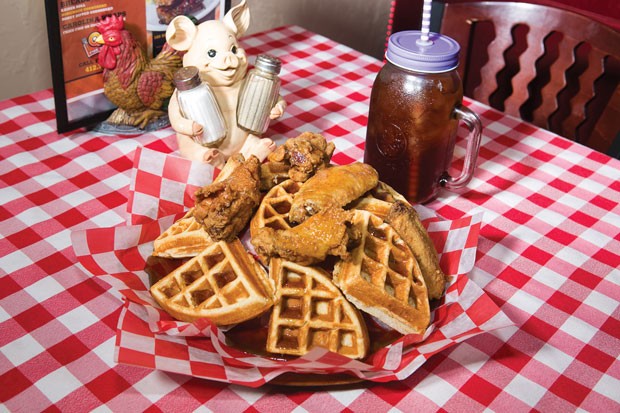 Ever alert to the possibility of barbecue, Jason was the one to spot the storefront in a little strip mall just off Saltsburg Road, near Boyce Park in Plum. We drove past in a flash, but that was enough to imprint the initials Q&M and the enticing words “Fish, Chik & Ribs.” A little internet research confirmed our hunch that we’d stumbled upon a new source of barbecue, and we were back within weeks.

Q&M’s has a counter and a few tables, surrounded by the requisite pig pictures and statuary, but our favorite part of the decor was the row of framed photos above the big storefront window. Family photos of fishing trips and cookouts, they included the late Quincy Banks, who cofounded Q&M with partner the Rev. Terri Michele. Michele currently co-owns the restaurant with Banks’ daughter, Linda Banks-Willoughby. When we visited, a member of the next generation was sitting at the counter doing some homework.

Built from a store of family recipes, Q&M’s menu is broader than is typical for a barbecue place. In addition to smoked meats and sides, there’s fried fish (both filets and croquettes), wings, country-style sausage sandwiches and more.

Wings come in two styles: fried half-wings, which we had with waffles, and whole, smoked wings, which we had with Carolina vinegar sauce on the side. The fried were about perfect — crisp and well seasoned with juicy meat within; despite their modest size, they were more like true Southern-fried chicken than sauce-less Buffalo wings.

The waffles didn’t have a lot of taste on their own apart from the seductive combination of salty, savory chicken and sweet maple syrup. But we liked their substantial size and texture, thick and chewy without actually being Belgian style.

The smoked wings were extraordinary, both for their intense smokiness and for their size, although some variation there caused problems: While the bigger wings were tender and succulent, the smaller ones could be a little on the dry side. The vinegar sauce was fantastic, spicy and not too sour, with ample flavor to hold its own against the smoke. The leftovers, shredded in the sauce, made superb sandwiches.

After such an excellent start, we were surprised by the fish and grits. The grits were merely blah — on the thick side, with no cheese or seasoning to enhance their porridge-like texture and bland flavor. But the whiting filets were tough, dry and oversalted. There was no salvaging this with sauce, so we quickly moved on.

Fortunately, the fish was an outlier. Ribs were served cut up and swimming in a barbecue sauce fairly typical of Pittsburgh joints; it was vaguely Kansas City-like, but not quite as sweet and thick. The ribs themselves were big and meaty, tender without being mushy, and, like the wings, infused with enough smoke to hold up to the dark sauce. Much better than typical local sauce, it had a full balanced array of flavors, including spice and little tang. (We poured the extra into a cup to take home; we froze it for future use on our own barbecue.)

The kitchen returned to that flavor profile in its excellent collard greens, studded with shredded pork, slow-cooked in the Southern style without rendering the leaves to mush. Black-eyed peas were thick, almost evoking refried beans, but whole and firm, and their distinct flavor shone through the seasonings.

But the best side we tried may have been Q’s signature cole slaw, a creamy version with a relatively light dressing. Not drowning in mayonnaise allowed the crisp cabbage and carrots to really step up, while a generous dusting of paprika punched up the already great flavor.

Finally, with great difficulty, Jason chose a brisket sandwich over country sausage, mostly because great brisket is, to him, the Holy Grail of barbecue. Alas, Q&M’s wasn’t great. It was actually hard to tell just how good it was because it wasn’t consistently sliced across the grain, resulting in some pieces that were tough and chewy. However, where the grain was suitably short, it was a pretty respectable brisket.

So in our broad foray across the barbecue menu of Q&M, we learned a few things, and we’re sharing them with you. One: Don’t choose between the wings, get both. Two: Rather than fish, go big on the sides. And if you go — and we hope you will — please invite us so that we can try that sausage sandwich and get a slice of Grand Ma’s 7-Up pound cake.