Q&A with siblings Adam, Jack and Ryan of AJR

"I really don’t know another time in history where high school kids cared so much about who was on the supreme court and stuff. It’s a weird time." 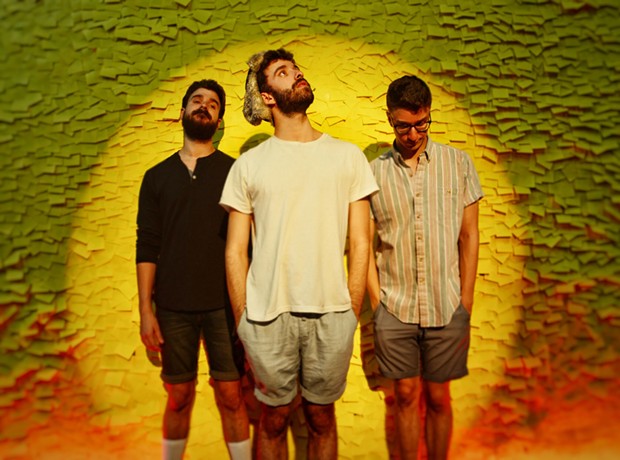 When AJR, a sibling pop trio from New York City, began busking in Washington Square Park 13 years ago, they had no idea their hobby would catapult them into the spotlight. Adam, Ryan, and Jack Met, - their first initials spell the band’s name – simply wanted to save up money to buy music
equipment.

Now, after the release of their first album, 2017’s The Click, AJR is selling out venues across the country. One of which is Stage AE, where the brothers performed on Sunday.

Even further, the electro/pop/hip-hop group's first single, “Burn The House Down” was selected by the March for Our Lives campaign to be the organizations Road to Change tour song.

But even with all the fast fame, the brothers are humble and down to earth. CP talked with AJR before their show on Sunday as they were in the car on the way to pre-production for the tour. Since the conversation was via phone, it was not always clear who was responding.

So, I read all over the internet that you guys built a studio in your parents NYC apartment. How long did it take to busk to save up money for that? Recording equipment is pretty expensive.
Jack: Yeah, it actually took a pretty long time. We did it every single summer, every day for 6 or 7 hours about 4 or 5 years straight. We would actually make a decent amount of money per hour. We’d do like $100 an hour. I was very young, I was probably about eight years old when we were busking, so I think there was definitely a sympathy factor. I feel like if we were fully grown adults playing music we definitely wouldn’t have made enough to buy pro tools and all these instruments. But we worked super hard for it, it was pretty tiring.

When you told your parents you wanted to build the studio, how did they react?
Jack: They were really supportive. For awhile our parents threw out the couch that was in our living room to make room for a drum set and moved other stuff around. Honestly from the beginning, they’ve done nothing but support our passion.

Out of the three of you, who was it that first got into music? Or were you all musically inclined.
Jack: I think we were all musically inclined. We were really into the Beach Boys, and the Beach Boys are still our favorite band of all time. Just listening to “Pet Sounds,” I have a memory of being very young, listening to the song and getting a feeling that I had never felt before like, “oh I want to create that type of nostalgic, beautiful feeling.” And at some point, while we were street performing we realized “oh we can write a song.” Street performing is really healthy for that because you can use it as a focus group almost and figure out what your sound is by seeing what makes people’s heads turn and figure out what you have to say that no one else is saying.

Are there any of your songs out now that you did while you were street performing?

[Laughs] No, all of those are buried deep somewhere.

Oh darn! Well, Adam said in an interview with Rolling Stone that you want to expand and show something different during your performances, even in fans have been to that venue before. What can people expect when you perform at Stage AE on Sunday?
We’re very excited. We kind of recently got this live following. For a while, there were people that were just listening to the albums and such but didn’t come to shows. Then we made a change, we decided, “Okay, what can we do onstage that you can’t get from closing your eyes and listening
to the record?”

Growing up in NYC we were surrounded by Broadway and Blue Man Group and Stomp, and we decided to use a lot of those weird artforms in order to make a show that felt really new to everybody and kept everybody’s attention.

What’s cool is that we’ve never headlined Pittsburgh before, so it’s very cool to be going and playing at a big venue for a lot of people that are very excited.

So "Burn The House Down" and "Weak" are your hits right now. How do fans react when you play those during your set.
Of course, they get really excited, but there’s this really cool feeling that goes on during our concerts that I feel is kind of ideal. The reaction to those songs is not much bigger to the reactions of the deep tracks on the album, which get very good reactions. Which shows us that people really just like the album, and they come to the concert to hear the whole album, which is usually what you want as an artist.

That means they just like your sound, which is amazing.
Yeah, I think we work really hard on making a cohesive album. And that’s really important to us, especially in this age of streaming and single and stuff. In this age of singles focused artists, I think it’s always been really important to us to make an album and make something that tells a story all the way through and gets people to buy into an idea and concept that’s bigger than a hook in a song.

Yeah, a few of your songs touch on political issues as well. With the upcoming midterm elections, how do you feel your music is making an impact on that?
It’s funny, we never really try to write political songs. I don’t think we’ve ever been like, “Okay let’s write a song that’ll change the world.” We more look at like, what do we think about on a daily basis. What are we surrounded by and how is that affecting me? What do I feel about that and what’s my place and identity in all this. I think that’s most of what we think about. The last couple songs, like “Burn The House Down” and “Role Models” have kind of been more about the news and what’s going on in the world because honestly, all of us more than any time in my life, are so integrated the news and integrated politics. Like, I really don’t know another time in history where high school kids cared so much about who was on the supreme court and stuff. It’s a weird time.

Our art, we don’t try to answer questions, because who are we? We just try to ask a lot of questions and get people thinking, and if we do that, then we’ve done our job.

When you guys are performing, do you have a favorite song?
Ryan: I feel like we probably each have a different one. I’d say “Turning Out” is my favorite to do because it feels like the most personal.

Jack: I think mine is “Sober Up” for a very selfish reason because it’s the one song where I don’t have to move around so much. I can just play the guitar and relax and get to watch the fans sing it back rather than whip my head around constantly.

Adam: I like the song "Three-Thirty." There are a lot of lyrics in that song, and it's always surprising to see the fans know every single lyric, even the small specific ones. It's a really nice juxtaposition. The verses have all these complex lyrics and then the chorus is a big drop and everyone starts jumping and gets really .

So, you're ending your tour in your hometown of NYC in December. What's next after that?
We're working on our next album, actually. We've been working for the last four months or so, and I'd say the album is about a third of the way done. As soon as the tour and done, and throughout the tour, we're constantly conceptualizing and figuring out what this next sound is and how we can kick it up a notch.

Is there anything you can tell us about the next album?
Yeah, on our stop in Pittsburgh we're going to be playing one of the songs from the new album. It's one of the favorites that we've written. But I think the general sound is different from The Click. It's kind of interesting, the frame of mind we're getting into because we wrote The Click when no one was listening to us. Nobody really cared and so we just accessed this part of the brain that was like, "Let's just do what we want to do." And now, when an album does well as The Click did, do you just try and copy yourself, do you try and access that same part of your brain that doesn't care what anybody thinks? Or do you use your new fanbase as an advantage and think what do they want to hear? What do they like about The Click and how can we take that and blow it up to a thousand perfect. I think we're kind of doing the latter. We're taking what's cool about The Click and kind of turning it on its head and bringing it into a whole new level.