Esposito brings her Person of Consequence to Rex Theater, Oct. 3 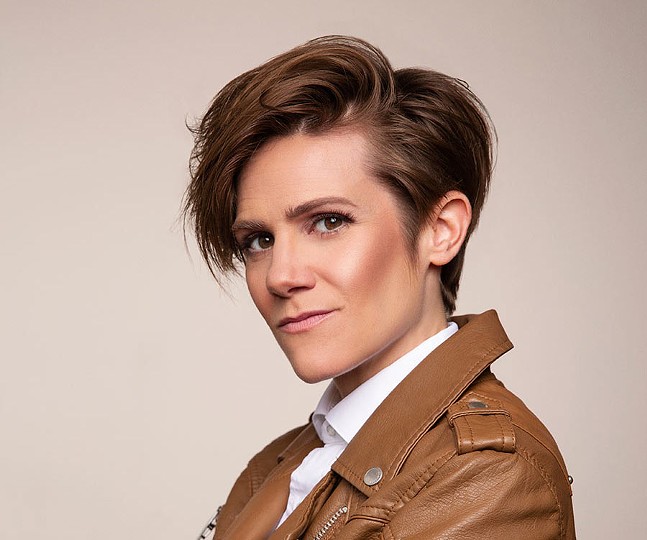 Cameron Esposito
Cameron Esposito has been performing stand-up for more than a decade, but her material — brutally honest, funny introspection about being a queer woman in comedy and a survivor of sexual assault — feel particularly poignant today. It's not that her material suddenly became relevant; it's more that cultural movements to destigmatize those topics and erode privileges in the industry have gained momentum. They caught up with what she — and many other female and queer comedians — have been talking about for years.

Her latest special, Rape Jokes, counters a long-running (and frankly, stupid) use of sexual assault as a punchline in comedy. Esposito tackles the subject from the perspective of a survivor and questions the subtle motivations behind making rape jokes. It's available for free on her website, with all proceeds going to RAINN (Rape, Abuse, and Incest National Network).

In another bit of ironic timing, City Paper's interview with Esposito took place as Dr. Christine Blasey Ford and Judge Brett Kavanaugh were testifying before a senate judiciary committee (the phone call took place during Ford's testimony, before Kavanaugh took the stand).

Here's the lightly edited interview with Esposito, who's bringing her Person of Consequence tour to Rex Theater on Oct. 3.

How are you?
Have you been watching this hearing at all today?

Yeah, almost everyone in my office is watching.
Oh my god! I will just say, [Christine Blasey Ford] is doing an incredible job of being honest, just about her emotions. She's talking about her nervousness. It's just so smart, because you need to trust her and believe her. It's giving me, like, life guidance, honestly, into how to create a connection with people.

It's weird to watch this and remember that she's not actually on trial.
Well, I mean, this is what it is. This is what it's like on college campuses, this is what it's like in internal work investigations, right? I think another thing this could give us is some perspective that this is what this process always is like, even if it's not a trial. When it's an internal investigation, or a student comes forward, that's what this actually looks like. And for a student, that's somebody who's 18 being put in this same situation. The feelings are all the same. Anyway. I think it's important to talk about it in this interview, we have to live in the real world.

We didn't know this hearing would be going on today, but you talk about a lot of these concepts in your stand-up, in your podcast. It occupies a lot of your life, your professional life. How are you able to turn off and take care of yourself? I imagine it can be taxing, living in this world all the time.
Thank you for knowing that. [Laughs] I will say that Rape Jokes, the special I made on this topic, making it was very healing, to be honest. Because the way I did it was in these really small rooms, in eight different cities. I did it every night, it wasn't one show in a city, it was like 14 shows in a city, so you can kind of grow with an audience. Just the things people would say afterward, which happens to me as a comic anyway because I speak from within a marginalized group and because I'm pretty honest, so people are pretty honest with me.

Something I've seen change in the last year, two years is people just saying, "I'm also a survivor, and your story mattered to me." When you look at the percentages of people who are survivors of sexual assault, it's not just one person, it's multiple people in every single room that you're in. In your family, in your friend group, there's multiple people affected. But we don't talk about it with each other. That's one way that, as survivors, we're limited in our ability to get support. There's a stigma to even bringing it up.

One thing that I found, I would just say, "I'm so sorry that happened to you." So often we get into this, "Oh and what are you going to do about it? Did that person face justice?" We start to get to these questions that distance us from the survivors just walking through the world. It's really cool to have people greet me with that, and to be able to greet other people with it.

I will say the press, doing press on it — and I'm aware that I'm doing press on it right now — but that was what was harrowing. One thing that we do quite badly in our culture is that we use assault as entertainment and divorce it from the experience of the survivor. So there were some times when I would be talking about this hour of stand-up and it would feel like the person I was speaking to, that maybe they weren't fully processing the topic that I was talking about. [Laughs] They would get into a questioning mode that would feel very — I don’t want to say dismissive — I would just say rote. And I think we have to remember that this is a big moment in somebody's life. That doesn't mean that you have to burst into tears if someone talks to you about it. But just greeting it with, "I'm sorry" makes all the difference in the world.

As someone who heals and processes difficult emotions through comedy, do you ever have to remind yourself to turn it off, to not make a joke?
[Laughs] Well, one thing that's true about comics is that offstage, we're the most serious people in the world. We're so serious about joking around. It's like, what kind of asshole is serious about joking around? But I think it works a little differently than that. I'm a pretty emotional person. I'm pretty real with people offstage. I think when the comic comes out, it's a coping mechanism and you can deal with things in your life with a dark sense of humor if you're a stand-up comic. That is never far away from you. So there might be times when I might joke around about something happening or that happened to me, and have a close friend look at me with like, "C'mon, drop the shit for a minute. Tell me how you're really doing."

Do you remember the first joke you did that felt like you were stepping out and exposing yourself in a way that you hadn't before on stage?
I'm very proud of my sophomore album, Same Sex Symbol. It was hard, all of the jokes on there were hard-won. I had been opening for other comics for a long time, working out that material, and those were straight comics. Some of them were men who were specifically known for having a more abrasive, one-liner sense of humor, and I would have to go out and tell these long meandering story jokes about how I’m a queer person and still get an audience that is not my audience on my side. I feel like when that album came out, it was a perfect snapshot of what it was like for me, doing comedy at that time. I was always introducing not just myself, but my entire demographic to every audience that I performed in front of.

When you decided to name your last special Rape Jokes, was there anybody in your life that didn't want think that was a good idea?
[Laughs] There were people who I think were worried about me. I'm grateful that I have people like that in my life. The title, to me, is deliberately incendiary. I know it's an intense title, but if I don’t use that title, then people who are not actually talking about the topic, but just mentioning in passing, they get to own my story. I just didn't want that. You want to fight for rape jokes? If that's really important to you that every topic gets discussed, and you want to fight for your right to get on stage, then how about — what if there are rape jokes that are actually about rape? What if there are rape jokes that actually serve a purpose and are hard to tell? Not because you're saying "f*ck you" to an audience, but because you, the comic, are putting yourself in a tough position, as an artist. I'm so much more interested in that.

I was thinking about a scene in your show Take My Wife, when you're backstage watching a male comic do a rape joke, which ends with "Society won't believe a woman has been raped unless 48 other women claim they are raped by the same guy. That's why I only raped 47 women." That joke feels very real, like something you'd actually hear, the humor is the same. Can you tell me about writing that joke?
I think I wrote that joke. For a long period of time in my field, there's been this weird push back against what is deemed "PC culture." But that person who's pushing back on feeling entrapped by PC culture, I find that what they usually mean is that they don't want to be kind, because PC culture is usually kindness. The other thing I find they're pushing back against is artistic evolution. Because I don't assume, as a comic, that the same jokes I’m gonna tell today will work in three years. Or that I can use the same language today and in three years. I believe culture evolves, and language evolves. I believe that's often a person who's speaking from a position of enormous privilege that doesn’t usually have to worry about their evolution, because they're on top and people will just put up with whatever they're doing. But as a comic, No. 1, I want to work with kindness.