"Twitter is a rough draft of humanity and I prefer my own edit." 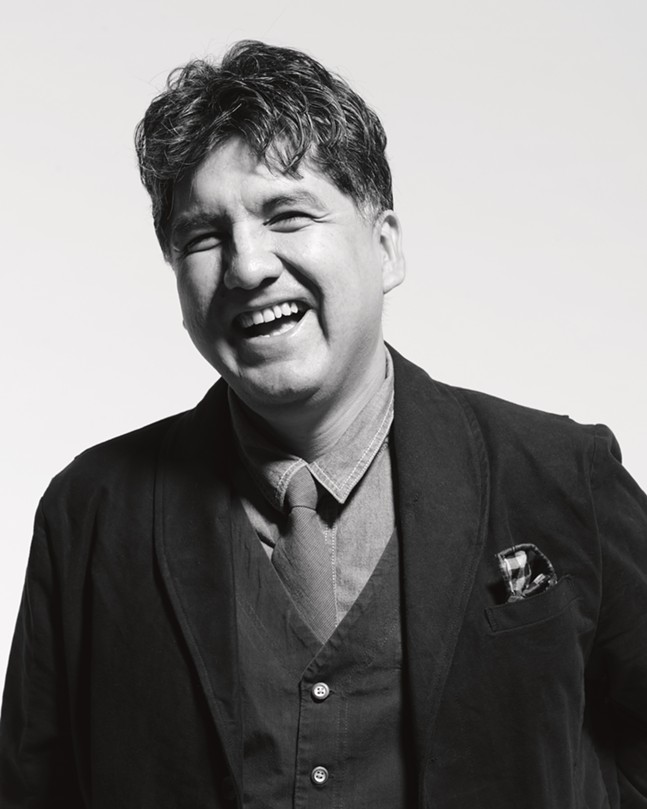 It was a rough summer for Sherman Alexie. Earlier this year, he embarked on a book tour celebrating the release of his memoir, You Don’t Have to Say You Love Me, and the 10th anniversary of his breakout young-adult novel, The Absolutely True Diary of a Part-Time Indian. But in July, in an open letter posted to Facebook that cited struggles with mental health, he abruptly canceled a handful of dates. (His Oct. 15 and 16 Pittsburgh Arts & Lectures appearances were not among them.)

The memoir focuses in large part on the life and death of his mother and their complicated relationship; early in the tour, he began experiencing odd, semi-supernatural occurrences that felt an awful lot like his mother was present.

“As I write in the memoir, I don’t believe in ghosts, but I see them all the time,” he wrote.

It was taking a toll. He was sobbing every night, struggling to keep it together at his appearances. So he took a break.

“When I am strong enough, I will return to the road,” he wrote.

It seems like it was a good call. On the phone, he was jocular and warm. The Petty soundtrack was helping, as did the time off. He seemed almost optimistic.

Here's the full transcript of CP's talk with Sherman Alexie.

Well, I mean, terrible, it’s a terrible time. I just mean, for all of us.

I’m sitting in my car. I’ve been driving around listening to Tom Petty songs. The funeral for him on the air is helping me deal with Las Vegas, too.

When did you start listening to Tom Petty?

That was it. There was something for everyone in his music. Can we talk about the short story "Clean, Cleaner, Cleanest"? It really connected with me. I loved staying in motels with my parents growing up, and when they would go out, I would pretend that I was rich enough to have this room to myself. Even though Marie is dealing with some ugly aspects of humanity at the motel, I sensed maybe a little affection for motels on your part in the story?

[Laughs] Maybe affection for people who work at hotels. I think that’s the affection you picked up on. The inspiration came from my sister, who was a motel maid for about a year. So some of those stories are hers. My sister’s middle name is Marie, so this story is very much an homage to my sister, so that affection is in there too I’m sure.

Do you stay in hotels while on book tours?

Yeah, the interesting thing is … I watched this standup-comedy documentary a couple weeks ago and they were talking about the terrible motels they have to be in often, and the way you know your career is going better by the stars of your hotel. You go up one star, two star, three stars. During the course of my literary career, I’ve stayed in pretty iffy roadside motels in little college towns and moved my way up to, you know, the Hiltons and Sheratons of the world. It’s a nomadic life, the writer’s life. I’m very familiar and very aware of the service workers in the hotels. Were it not for the luck of this career, I would be a service person.

What do you think you would do?

I still love motels and hotels, but my friends and family who have to travel often for work hate it. After all this time, do you still like staying in hotels?

As a writer, the loneliness, the solitude helps me. I think there’s something artistically beneficial to all the loneliness of the road. I do enjoy the generic nature of hotels. I do not want to be in anything eccentric. I want every hotel room I’m in to look like an IKEA.

Pittsburgh has a bunch of boutique hotels now. Some of the rooms have record-players or acoustic guitars.

That’s too eccentric. I want every hotel to look like a Target. As a traveling writer, you’re always at the mercy of whatever the coolest place is at the moment so I end up in a lot of goofy-ass hotels … There was one book tour where I ended up with three rooms in a row that had fainting couches.

Did you put them to use?

I took photos of myself on the fainting couches and would send them off to everybody and say, ‘Now I need a corset!’ [Laughs]

You mentioned the loneliness of the road. Having now done this for awhile, do you have coping mechanisms or routines to combat that loneliness?


Do you do a lot of writing on the road?

Jumping back a bit, prior to the publication of … Part-Time Indian, was there any part of you that felt it had the potential to be banned or that people would find it offensive?

[Laughs] Vaguely? I had no idea that it would become so popular to ban it. I didn’t know. I wasn’t experienced with the kids'-book world. I didn’t realize how organized the book-banners can be. And I had no idea about the mythology that can build up around a book.

I found it pretty surprising that it was banned.

Is that what struck you right off the bat when it started to cause a stir?

Do you watch South Park?

Yeah, a little bit. I haven’t in years.

It just reminded me of an episode where the boys are assigned Catcher In The Rye after it’s removed from the banned-book list. They’re super-excited to read this salacious, offensive story but when they finish it, they’re completely mystified by how tame it is. Like “this is nothing compared to what we see on TV” —

While we’re talking phones, I noticed you deleted your Twitter earlier this year. How’s that been?

Awesome. Being on Twitter was like purposely going to a series of parties with people I don’t like, where you search the party for the one person that you’d gone there for. Twitter is a rough draft of humanity and I prefer my own edit.

Nothing to do with me tweeting. I like the access to links to news articles I should be reading, and music videos, the links to art is what I miss, learning about new art is what I miss. And I miss the standup comedians being funny.

There are some that work like little art projects in themselves. One I like is “Fuck Every Word,” which is a bot started in 2014 that tweets out “fuck ______” starting at the beginning of the dictionary. It’ll finish the dictionary in 2020.

It’s really fun to go through and see what words get a lot of retweets, like “fuck liberalism” or something. It’s funny to see which ones catch on.

Ahhh. See that kind of thing is art. The art of it is right. … and you know, really, I blame Twitter for the election.

Yeah, though I guess they’re trying to address some of those issues now.

It’s too hard to look away, I think that’s why the focus isn’t on what you’re talking about.

Trump is providing a cover for the structural dangers. Regardless, he’s gone in a couple of years, but the power structure remains the same.


Were you surprised by the outcome of the election?

How early did you think he’d win?

There’s [a] live recording of me in October saying he was gonna win, here in Seattle.

How was that received?

Nope! Missed that one. [Laughs] I thought, ‘There’s no way!’ So I’m good at predicting Republican wins and lousy at predicting Democratic wins.

Back to business … I originally read "War Dances" in an anthology Non-Required Reading, the Dave Eggers collection, and my girlfriend recently noticed that the version that ran in the New Yorker ends differently. I don’t know if that was a choice that you made.

I do not remember. No clue.

The one that I read in Non-Required Reading ends with “I would always feel closest to the man who had most disappointed me.” And the other one ends with the line before, “... none of them laughed as hard about my beautiful brain as I knew my father — the drunk bastard — would have.”

So which one has the disappointment line?

The Non-Required Reading. The New Yorker version doesn’t have the extra line.

Oh that’s interesting, because I love that disappointment line. Maybe I came up with it later? Non-Required Reading would have probably come from the book. I don’t remember them not wanting that line. I don’t remember that one specifically. But I had brain surgery in December of 2015 so there are swaths of my past that are gone.

Do you run into instances of missing memories often?

It’s disconcerting to say the least.

How have you been feeling since being back on the road?

I’m good. It’s really funny because I did a live gig in Minneapolis recently, the first one since I went back on the road, and I got a standing ovation coming out on stage. I sat down laughing and said, ‘wow you guys were really worried about me!’ [Laughs]

The thing is, I averted, for the first time in my life, I actually stopped myself before I was in trouble. So I think in this self-destructive and really awful time, I made a publicly healthy decision that I was publicly honest about and ended up feeling like a revelation to everybody. Like the honest public declaration to take care of myself ended up feeling like political resistance.

I got so many emails from therapists and counselors thanking me. I guess I was quite the topic of discussion in therapy sessions around the country. So if my unusually healthy decision helps people, I’m really happy. It helped me. I spent seven weeks reading writing and sitting on the couch, playing with my kids and dog, and I love my life. I love my professional life, I love my career, but some days it’s not worth it.