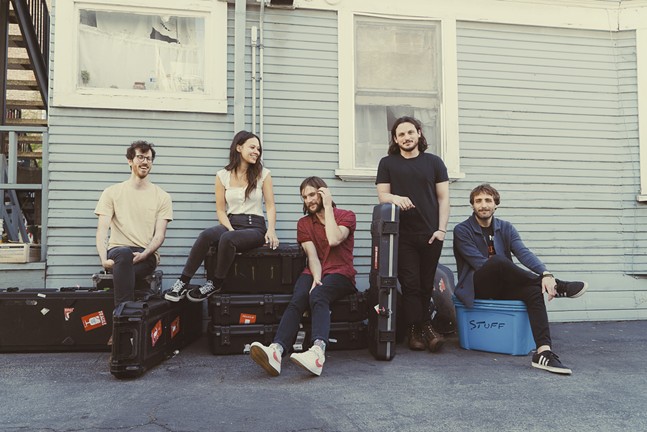 Photo: Andrew Keyser
Mt. Joy
Three years ago, Matt Quinn had a surprise hit on his hands. "Astrovan," a catchy folk-pop track released under the moniker Mt. Joy with guitarist Sam Cooper and multi-instrumentalist Michael Byrnes, racked up millions of streams on Spotify more or less without any promotion or fanfare. In the years since, the band expanded to a five-piece with Sotiris Eliopoulos on drums and Jackie Miclau on keyboard and this year, Mt. Joy is embarking on its largest headlining tour to date — including a stop at Roxian Theatre this Wed., Oct. 30.

While this fall tour is a major feat for the folk-rock outfit, Mt Joy has experienced an impressive trajectory since releasing that inaugural track. In the short time since dropping "Astrovan," Mt. Joy has opened for The Shins, performed at festivals such as Lollapalooza and Made In America, toured the U.K., and released a self-titled debut album.

"We have been traveling for pretty much three years straight," says Quinn. "It’s been a difficult adjustment at times. But we’ve been so lucky to be able to take refuge in the shows, and have really become a weird little family."

Ahead of Mt. Joy's stop in Pittsburgh, City Paper chatted with Quinn about the band's career trajectory.

Mt. Joy opened for some pretty big acts like The Head and The Heart and The Lone Bellow, before even releasing your first album. How did that feel, as a new band?
Yeah, we were lucky to have those opportunities early on. It was definitely a little scary being thrown into rooms of that size, but we learned so much on those tours. Super grateful to those bands.

When would you say the moment of "we are actually pursuing our dreams" hit you?
I mean fairly early on we got to play Bonnaroo. I remember just always wanting to go as a fan of music, and my first time being as a performer was pretty surreal. I think that was a big moment for all of us.

Why do you feel you were able to stand out above other growing folk-rock bands?
Not super worried about that. I think our job is to stick together, support each other, and stay inspired to create. We already stand out.


How did you balance writing/focusing on an album while your career was growing so exponentially?
Yeah, it was a little easier on the first record because we could kind of pull from any songs I’d written throughout my life as well as the ones we were working on at the time. For example, "Silver Lining" was a song I’d written in college that we just rearranged a bit and added a verse.

What have been the biggest challenges you faced so far as a band?
Just handling the fairly massive change in our lives. We have been traveling for pretty much three years straight. It’s been a difficult adjustment at times. But we’ve been so lucky to be able to take refuge in the shows, and have really become a weird little family.

Sam and Matt, you’re from the Philadelphia area. Have you ventured to the west side of the state before? And if so, what did you enjoy most about Pittsburgh?
Well, not too often to be honest. BUT, my parents met at Carnegie Mellon and have always spoken very highly of Pittsburgh. I’ve also had a few friends who moved there and love it. Including my buddy, Mike Berger, who is in the great Pittsburgh jam band The Clock Reads!

What can your fans expect during your show on Wednesday?
A slippery sandwich staring straight south so sweet you shout!

Anything else you would like people to know?
A hot dog is not a sandwich.