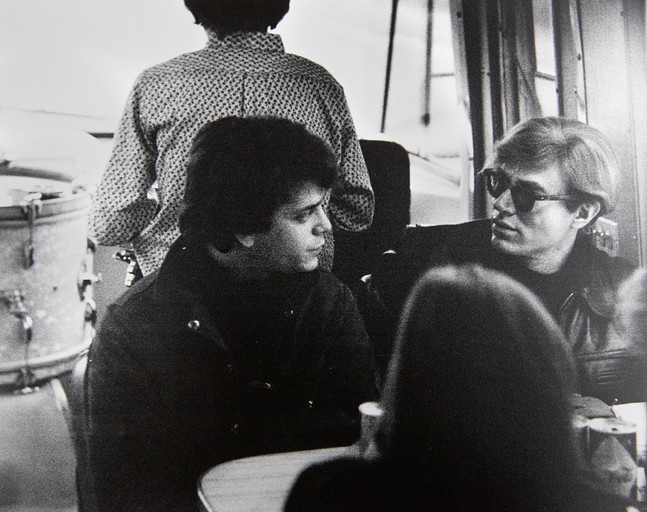 Photo courtesy of Cornell Library's Division of Rare and Manuscript Collections
Lou Reed and Andy Warhol in 1965
Earlier this week, the New York Times reported that previously unheard recordings made by Lou Reed in the mid-1970s were unearthed two years ago in the archives of the Andy Warhol Museum. According to the story, Dr. Judith A. Peraino, a music professor at Cornell University, was looking into a book about Warhol and stumbled across the tapes during her research in 2017.

Warhol and Reed have a storied history, to put it lightly. While Warhol managed and produced Reed's band The Velvet Underground in the 1960s (and designed the "banana" cover of the debut record, The Velvet Underground & Nico), ties between the two were subsequently cut and little was known about any collaboration in mid-'70s. But what Peraino found on the recordings were demos Reed had written containing lyrics from Warhol's 1975 book, The Philosophy of Andy Warhol: From A to B and Back Again.

"The Reed archives contain a tape with short excerpts from a few of the Philosophy tracks — dubbed over a copy of The Eagles’ album One of These Nights — but archivists did not know what they were," the Times reported.

Sadly, because of the tricky copyright issues involved — words by Warhol, songs by Reed, recordings belonging to Warhol Museum — the tapes will likely not be heard commercially any time soon. So Pittsburgh City Paper reached out to Peraino to learn more about the discovery and what it means for fans of the two iconic artists.

Can you walk me through listening to these recordings for the first time?
In July 2017, I was on a research trip for a book on Warhol and musicians in the 1970s. I had been listening to a lot of tapes from the 1970s, and this one was listed in their inventory as “Philosophy Songs” for side 2. I listened to side one first, which had the Lou Reed live performances from his 1975 tour.

But side two was the big surprise, hearing Lou Reed strumming an acoustic guitar and singing these unknown songs, all of which used phrases from Warhol’s book. I was bewildered at first because he sounded very different from the performances I had just listened to. It wasn’t his usual deep chest singing voice. It was much more nasal, with a slight lisp. I had some of the museum staff listen — Matt Gray and Greg Pierce — and as we all listened and talked about it, it became clear that what I had found — this unknown set of songs from Reed.

I was buzzing with excitement then and began the two-year process of figuring out what this tape was all about. I was able to verify the handwriting on the tape label then and put the story together from other archival material, and Reed’s bass player Bruce Yaw.


Where were you? What does the room look like?
I was sitting in the office of Warhol Archives, which the public can glimpse behind the glass wall and the display of his “time capsule” boxes. It’s relatively small and has no windows so the sun doesn’t fade anything that is being processed or examined. It’s an intense space because they only allow one researcher at a time and you are working right beside the staff who are working on cataloging and documenting and retrieving information for curators etc. The staff were fantastic. Erin Byrne, Matt Gray, Greg Pierce.


When did you realize they were something special?
It was Greg Pierce who said something to me like, “You’ve just discovered an unknown Lou Reed album” and that’s when the significance really hit me. I hadn’t stepped back to think about it in those terms. And that’s when I knew I had to get to the bottom of what this tape meant — both sides. It is very rare for a music historian to find something totally unknown like this.


You write in your paper about this discovery, “I’ll Be Your Mixtape,” that analog tape “records and enacts a closet drama.” What do you mean by "closet drama"?
I am referring to a mixtape, which is a tape of songs that is often personalized, made to send a message with music to a specific person. Only two people know for sure what that message refers to — the tape’s creator and its recipient. In the heyday of making mixtapes for your friends or romantic partners, it took a very long time to choose the songs and get them to fit just right on the tape. It was a labor of love or some other strong emotion.


What was your relationship to [Reed's 1975 record] Coney Island Baby before discovering these recordings?
I had known Reed’s post-Velvet work from my interest in 1970s rock styles —especially glam and punk. I work on LGBTQ topics as they intersect with popular music, and because this album is clearly about Reed’s relationship with Rachel, his trans partner at the time, I was fascinated what he was trying to say about that in music. Especially the song “Coney Island Baby” which is extremely nostalgic, and also about feeling like an outsider; and it’s sweetly romantic at the end when he takes the voice of a DJ and dedicates the song to Lou and Rachel.


How many people have heard the recordings?
Very few people. Me, some of the staff at The Warhol Museum, probably Andy Warhol.


What did you take away from this discovery? What do these recordings signify or illuminate for you?
This tape is important on a couple of different levels. For fans of Lou Reed and Andy Warhol, it opens a window onto their continued attempt to for a musical collaboration in the mid-1970s, nearly a decade after their most famous work together in 1966-67. It also shows Reed trying on the voice of Andy Warhol, which he wouldn’t do again until 1989 with Songs for Drella; this ties to his abiding interest in creating song lyrics with vivid characters, and not shying away from the difficult side of those characters. It is also an early example [of] how mixtapes used in the 1980s — as personalized musical letters. In this case, Reed created an audio double portrait: one side is him in his live performances, the other side is his portrait of Warhol.

Read more about the recordings in Peraino's paper "I'll Be Your Mixtape."