Puzzling Choices: Not many are surprised at Westinghouse's failure, but can it be put back together again? | News | Pittsburgh | Pittsburgh City Paper

Puzzling Choices: Not many are surprised at Westinghouse's failure, but can it be put back together again?

"We are not surprised by this kind of confusion. ... This was a disaster waiting to happen." 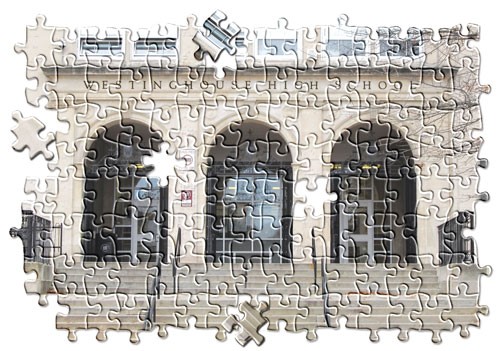 Camille Grady's senior year was bound to be different than every school year before it. She just never envisioned it would be such a mess.

When Grady began classes at Homewood's Academy at Westinghouse this past fall, it was the first time the 16-year-old had ever been enrolled in a public school. Her previous school, Mount Alvernia -- an all-girls Catholic high school in Millvale -- closed in June, sending her scrambling.

Westinghouse seemed like the right fit. At least that's what officials from the Pittsburgh Public Schools were telling Grady. Despite its troubled past, Grady learned that the high school was undergoing a huge makeover, one that would feature separate classes for boys and girls.

Having come from an all-girls school, she says, "[My mom] thought it would be a good thing"

The reforms at Westinghouse -- including a grade 6-12 configuration, extended school year and single-gender classes -- were supposed to help solve the school's longstanding problems of dismal test scores and a failure in college prep. Many opponents contend that the reforms have only made things worse.

District officials admit that the school has been plagued by disorganization. In early November, for example, the district placed the school's co-principals on administrative leave. Shortly after, in response to threats of a lawsuit from the American Civil Liberties Union, Superintendent Linda Lane announced that she wanted to eliminate single-gender classes. As this issue went to press, the school board voted on a recommendation to scrap most of the school's main components.

In an attempt to quickly fix the failing school, critics say reforms were rushed, resulting in a poorly planned program with little chance of success.

"We are not surprised by this kind of confusion at Westinghouse," says Marilyn Barnett, chair of the education committee for the Pittsburgh chapter of the NAACP. "This was a disaster waiting to happen."

Few would argue with the idea that Westinghouse needed to be reformed. To say the school's students have performed poorly in recent years is to grossly understate the severity of the problems.

"We haven't served those kids for so many years," says school-board President Sherry Hazuda.

Single-gender classes, district officials argued, would create an environment in which boys and girls could learn without being distracted by social pressures.

But the single-gender concept immediately drew sharp criticism. Opponents, most notably the ACLU and NAACP, argued that teaching boys and girls separately was at best a bad educational policy -- the world after high school is co-ed, after all -- and at worst an illegal one: You can't force students in public schools into gender-separate classes.

To abide by federal law, the district originally allowed students in the Homewood area to opt out of the single-gender academies at Westinghouse and instead let them enroll in the Hill District's University Prep school. But too many students opted out.

To remedy the problem, the board voted to assign some students to Westinghouse, giving them 30 days after the start of school to decide whether to stay.

ACLU attorney Sara Rose called it a "weak effort to evade federal law," noting that the plan would essentially coerce students into staying in the single-gender classes. In a May Pittsburgh Post-Gazette op-ed piece, Rose wrote: "The Pittsburgh school district ... is plowing ahead with its plan to force students into single-sex classes regardless of student or family wishes."

Because it was a concern a year ago, many critics of the plan are puzzled as to why Lane is only now deciding to ax the single-gender classes.

Lane says she was convinced that the concept would work once the school year began, and that legal challenges would never come to fruition. But when she learned that an ACLU complaint was about to be filed, Lane says she was convinced the district couldn't successfully fight it -- especially given the single-gender training sessions she observed at the start of the year.

"I [witnessed] some training our teachers had received that, frankly, I'm not comfortable with ... some things around how to treat boys, how to treat girls," Lane told City Paper. "And I knew those kinds of statements ... would have been very difficult to defend."

However, criticism of Westinghouse reforms didn't end with the single-gender concept. Opponents who closely followed the year-long planning process say district officials failed to carefully plan for the school's opening this fall.

"They jumped on it too fast," says Johnson Martin, a former PPS administrator who, after retiring from the district, served as an education consultant under Roosevelt. "They haphazardly planned."

Lane isn't making excuses for what has happened at Westinghouse. In her opinion, the school's problems were a result of both poor planning and poor execution. But she doesn't buy the argument that the district rushed the school's reforms.

"One of the things we all seem to forget is that Westinghouse was not an effective school before we started [reforms]," Lane says. Given that, "It's very hard for me to ... say, 'We need to wait another year.'"

But it didn't take long before evidence surfaced that Westinghouse was ill-prepared to open its doors to roughly 620 students. Early on, students reported that they did not receive schedules for classes. And some of those who did were given the wrong classes.

Westinghouse was supposed to use a trimester schedule, as opposed as to the more common semester schedule. But, as it turns out, school officials never rewrote the curriculum to fit the new format.

"That led to a lot of confusion in the building," says school-board member Sharene Shealey, who represents Homewood schools, including Westinghouse.

"There's a lot of classes people need to take, like math, but instead they give them art," says Nathawan Weatherspoon, an 18-year-old senior at Westinghouse, who called the school "unorganized."

"Nobody can tell me how many credits I have," adds Grady. "I don't even know what I need to graduate."

Earlier this month, after placing the school's two co-principals, Shawn McNeil and Kellie Abbott, on paid administrative leave, Lane announced that she wanted to eliminate single-gender classes by February. In addition, she said she wanted to remove the school's magnet status -- which opens the school to students citywide -- and get rid of its extended school year.

Once the changes take effect, the school will essentially be back to what it was before the overhaul.

"When you have to scrap a plan once school has started, you do serious damage to kids," says the NAACP's Barnett, principal of Imani Christian Academy, in East Hills. "Kids need order, consistency and direction."

"It's mind-boggling what has gone on there," adds Marge McMackin, an educational consultant who used to teach at Westinghouse. "It couldn't be worse."

"It's really, really, really unfortunate what has happened over there," says Carey Harris, executive director of A+ Schools, a local education watchdog group. "The problems [at Westinghouse] are not related to kids. They're adult problems."

For her part, Lane refuses to assign blame for the school's problems. But some wonder who is culpable for the mess at Westinghouse.

While some say Lane is ultimately responsible for the school's awful start, others say the problems were largely out of her control by the time she became superintendent. The reforms were Roosevelt's brainchild, and when he resigned in October 2010, his reform agenda was left for Lane, his former deputy.

"Things were already going wrong well before she took over," says Harris. "What defines her legacy here is how she deals with the problems. And she's dealing with this one. She's not pointing fingers."

But perhaps she could. At the end of June, as planning was in full swing, administrator Derrick Lopez -- who was leading the reforms -- left the district to become CEO of Homewood Children's Village, a community youth initiative. Lopez did not return phone calls for comment.

"I think [his departure] had a big impact" on preparations at the school, says Barnett.

"Could that have had an effect? Possibly," allows Lane.

Still, some aren't letting Lane off the hook.

"She's been involved from the beginning," Martin says. "Westinghouse has been a thorn in the district's side for the last 10 years. ... Now it will be an albatross for the district."

That's little consolation for students who have put their educational futures in the hands of the district's failed experiment. For Grady's part, she intends to make sure the district's blunders don't derail her graduation plans.

"I don't know what anybody else is doing," she says, "but I'm gonna walk across the stage."