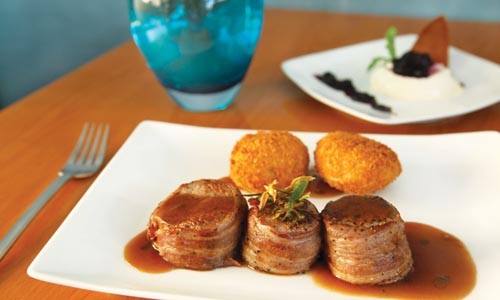 The South is home to some of America's great cooking traditions, and judging by the number of fried-chicken-and-grits joints in town, Pittsburgh is home to a lot of people who love southern food. Count us among them. But if the rapid evolution of culinary fusion over the past 25 years -- not to mention that astonishing diaspora of American regional cooking -- has taught us anything, it's that great cuisines have more to offer than their traditional recipes. Those get assimilated soon enough into the big ho-hum of mainstream cooking (think tacos, or spaghetti and meatballs). But when creative chefs borrow and blend, the results -- whether true fusion or mere inflection -- can be even more exciting than the most authentic preparations.

Pure and Simple Bistro, in the eerie stage-set called Settlers Ridge in Robinson, has taken on the challenge. The menu is not southern, per se, but the South -- in all its diversity, from its bayous to its barrier islands -- contributes some of its most distinctive flavors to a thoughtfully curated selection that, for the most part, is true to the name on the storefront.

Owner Jean Bugay and chef Jeff Maag strive to "keep it simple" with fresh (never frozen or partially-cooked-ahead) ingredients, combined in dishes that make southern food -- a decidedly down-home cuisine -- seem downright sophisticated. The slow-food approach, in which everything is prepared to order and patrons are asked for their patience so that each dish can receive the preparation it deserves, came as a particular surprise in a restaurant located right next to the multiplex cinema. But Pure and Simple can accommodate diners who don't like to miss the previews -- just call ahead.

Still, we think it would be a shame to rush through a meal at Pure and Simple. In addition to southern cooking, the restaurant emphasizes East Coast seafood, in homage to which the walls are painted the serene gray-green-blue of calm seas, with a large seaside mural that is just this side of kitschy. Candlelight ups the ante on the ambience for a date-night, or perhaps even an anniversary dinner. Okay, it's not real candlelight but those flameless faux pillars with their realistic electric flickers. But that's just as well, since we didn't have to worry about catching our sleeves on fire as we passed dishes across the table.

Starters were marvelous. Shrimp and grits were formed into lemon-sized fritters, their dark crusts containing a moist, soufflé-like confection of butter-yellow grits studded with sweet, meaty morsels of shrimp. A puddle of sweet chili sauce added just a bit of kick, but the fritters were addictive with or without it.

Sweet-potato wedges brought those trendy favorites, sweet-potato fries, a little closer to their southern origins by roasting them, a method that made for a much lighter, fluffier interior with some intense caramelizing at the thin edges. A jalapeño aioli, drizzled over top, added richness and heat to the sweet potato's sweet starchiness.

The South also made its presence known in a starter-size portion of fried chicken with honey mustard. Or perhaps we should say, in honey mustard; the dark meat pieces -- a leg and two wings -- were coated in the sauce. This was not quite what we'd hoped for, as good, southern-style fried chicken needs no embellishment. Nonetheless, the sauce offered the zip and tang of mustard, cut just a bit with honey, to create a flavorful, not cloying, complement. Also favorable: The moist chicken retained its crispy crust despite being bathed in liquid.

Pear salad, while not especially evocative of Spanish moss and southern nights, was a successful combination of firm, sweet pear, baby field greens, bleu cheese and candied walnuts in a light, sweet-tart cranberry vinaigrette. Grilling the pears -- just enough -- enhanced their juiciness without reducing them to mush.

For our entrees, Jason took on the southern specialty and Angelique, the East Coast seafood. The former, bourbon pork tenderloin, featured a luxurious bed of creamy-smooth grits beneath a succulent short rib, finished with a glossy, simple and not-too-sweet glaze. On the seafood side, Pure and Simple's crab cakes stood out with their Cajun seasoning (a welcome departure from the usual, Maryland-style Old Bay) and their crispy panko breading. Here, a bed of sautéed spinach provided substantial counterpoint to the rather delicate cakes.

We also tried the lone sandwich on the menu, the bistro burger, which offered a choice of cheeses. The meat seemed to be standard chuck, but that was the only standard thing about it. Whatever alchemy of searing and seasoning it was subjected to in the kitchen, this was a wow burger. It burst with savory, meaty, salt-and-peppery flavor, topped with perfectly melted, creamy cheese and balanced by the flavor-absorbing buffer of its bun.

In a world of gourmet sliders, multiplying burger bars and steakhouses with their tony Kobe beef burgers, here was a burger, nonchalantly offered at a southern/seafood restaurant, that really got it right.

Which is, in the end, our assessment of Pure and Simple's modern take on southern food: It gets it right.

Editor's note: An earlier edition of this story had incorrect Sunday hours for Pure and Simple Bistro.