"What globalization is doing to that country, what their economy is doing is interesting to me, boom or bust." 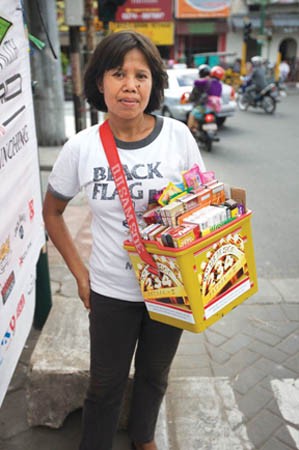 A vendor in Jakarta wearing a Black Flag T-shirt

The ripped-and-tattooed Henry Rollins, now 50, rose to fame singing with Black Flag. He's since fronted Rollins Band, released numerous spoken-word albums, done comedy, been a VH1 talking head and acted some. (He played a neo-Nazi on the FX series Sons of Anarchy.) He also travels -- not to Cancun and the south of France, but places like Iran, post-Katrina New Orleans and Bhopal, India.

His travels over the past decade led to the new book Occupants: Photographs and Writings by Henry Rollins (Chicago Review Press). It's a pictorial diary of places most of us will never see in person, interspersed with some very Rollins writing.

There are many reasons Rollins visits the places he does.

"Perhaps it's the history of the country -- their history with America, their history of war and conflict; those are key factors," he says in a phone interview from Los Angeles, where he lives. "What globalization is doing to that country, what their economy is doing is interesting to me, boom or bust."

The photo subjects range from harrowing (a Thai man with one leg crawling toward a bowl on the ground) to decadent (Saudi palaces). The writings range from poetic ("We are born into the death life. We haunt our own lives as we pass through our days, floating on the edge of humanity") to hyperbolized imitations of the Ugly American ("What will make it end? AIDS? Forced labor camps? We won. You lost. We live. You died. Fuck you"). Two photos feature people in Black Flag T-shirts that found their way to Indonesia.

A notably less poetic, but certainly moving, chapter includes Rollins' photos of Bhopal. In 2009, he broke into the Union Carbide pesticide plant that leaked poisonous chemicals in 1984, killing thousands and sickening more.

A few photos document Rollins' time doing USO tours in Iraq and Afghanistan. Some might find it cognitively dissonant that someone so critical of American policy and globalization would entertain troops busy prosecuting those agendas. Rollins disagrees.

"Soldiers do not start wars; presidents and members of Congress do. Soldiers just go fight them," he says. "I have almost total disagreement with America's presence in Afghanistan and Iraq -- especially Iraq. By going and entertaining the troops in Baghdad, am I supporting that effort? I say I'm not."