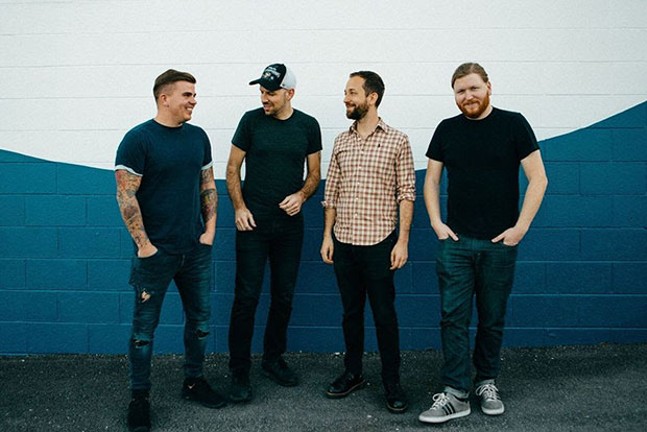 Punchline
As an adolescent, I distinctly remember hearing the sounds of Punchline’s 2003 album Action, seeping through the walls of my teenage sister’s bedroom. “Heart Transplant” was forever sewn into my heart with the admiration for my cool big sister and her very rad music taste. The harmonies were infectious, the bouncy pop-punk anthem perfect for singalongs.

I grew up to be a teenager in a pop-punk/easycore band and continued listening to 37 Everywhere, Just Say Yes and Delightfully Pleased. My bandmates and I geeked out at the chance to play a gig with them in Jeanette, PA. Imagine, high schoolers playing with a band that was a core part of the early 2000s pop-punk sound that sparked emo and pop-punk nostalgia dance parties across the country.

Little did we know, Punchline had been just like us. A band formed in high school in a garage, writing ska and punk songs as a three-piece, figuring it out as they went. In fact, July 8th, the day of the band’s 20th anniversary show, coincides with the date of the band’s very first practice.

“I don’t know why, but our friend came over and filmed our first practice. We could have had that practice and it fizzled out, but the fact we have that is super embarrassing,” says vocalist and guitarist Steve Soboslai, “[In the video] I’m wearing a Hard Rock Cafe shirt, middle-parted bowl cut, jumping off time while playing ska upstrokes.”

That footage may never see the light of day, and the band may write off its first five years as the awkward, cutting-of-teeth phase. But, the band largely stuck together, even through various lineup changes.

Just for fun, the original lineup got together to practice at the same friend’s house who filmed that first practice. “Just sitting there with those guys, I can’t believe...the fact we’re all together and can still get in a room and have fun, no one has died, no one has been on the outs, it’s really nice,” Soboslai says.

Being a band for 20 years is a challenge and a benchmark that few reach, especially absent any falling outs or drama. For Soboslai, the ultimate challenge of being in a band for that long is dealing with people’s preconceived notions of who you are and what you should sound like.

Punchline has always been a pop-punk band, emphasis on the pop. The catchy hooks and harmonies naturally translated to a more electronic-based, clean-pop sound on 2015’s Thrilled, but for folks who hadn’t been keeping up with the band, it was a little jarring. The latest single, however, is a track with a punkier edge, bringing back a bit of the classic Punchline sound. “Darkest Dark” is the only new song the band will be performing at the show. But, Punchline’s members say they have enjoyed growing and changing its sound together too.

“The best part of being in a band for 20 years is writing songs with my friends. Those songs and albums are a chronicle of our lives, in a way,” explains bassist and vocalist Chris Fafalios in an email to CP.

Twenty years of songs is a lot to whittle down. With 150 to pick from, Fafalios arranged a system so the four-piece could democratically select what tracks to showcase at the anniversary show.

“Chris emailed us and was like, we really need to figure out the songs for the set. And he already had this system in place, he was like, ‘How about everybody suggests 10 songs and then we see what songs everyone has in common on their lists, and then we’ll cross those out and use the remaining songs as a list to vote on,’” explains Soboslai, “So it was nice because we had this really democratic list. And then — this was a month before we started practicing specifically for the show — once we actually started practicing for the show, I was like. ‘These are all B-sides.’”

Soboslai goes on, “There’s no “Heart Transplant,” “Caller 10,” “The Hit,” “21 Forever” wasn’t on the list. None of the songs we ever made music videos for were on that list.”

“I was just thinking about playing [the original set they wrote] and after the show my dad being like, “What were those songs?!” Soboslai laughs.

After some adjusting, the band settled on a set list that will include the hits while also affording the band some time to play its favorite B-sides and deep cuts.
“It’s a mixture of songs that seem to be popular among our fan base, and songs that we just really enjoy playing,” assures Fafalios.

Although the members of the band are all still local to their hometown of Pittsburgh, Punchline performances in the city are few and far between, intended to make each show feel like a special occasion. This particular show and its afterparty serve as an opportunity for Punchline to share its growth and to thank everyone who has been along for the ride.

“I’d just really like to stress how appreciative we are for all the support that people have shown us over the years - especially in Pittsburgh. As a fiercely independent band, there is no way we could possibly still be doing this after 20 years without the support of people who happen to like our songs. Music isn’t a basic life necessity like food, water, or shelter, so the fact that people would spend their hard-earned money to come see us play or buy our albums means the world to us,” writes Fafalios.