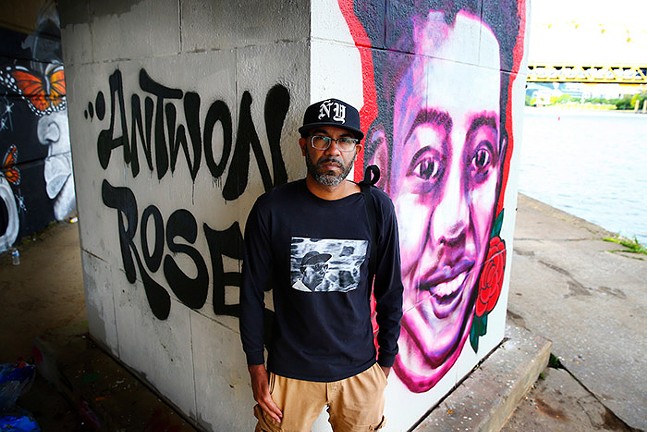 CP photo: Jared Wickerham
Pittsburgh Post-Gazette staff photographer Michael Santiago poses for a portrait in front of a Black Lives Matter mural with Antwon Rose painted behind him in Downtown Pittsburgh, along the Allegheny River, on Mon., June 15, 2020.
Michael Santiago is the perfect example of who Pittsburgh is trying to attract and retain in the region. Santiago, a photographer who announced he’s leaving the Pittsburgh Post-Gazette, is talented (he won a Pulitzer Prize), driven, and passionate. He is also a Black immigrant who was born in the Dominican Republic and grew up in New York.

In a region that is overwhelmingly white and has one of the oldest populations in America, Santiago is the type of person that regional leaders are giddy about seeing move and lay down roots in Pittsburgh. Immigrants have been slowing the region’s population decline for years. In a city with some of the worst racial equality in America, talented and driven Black residents provide some hope Pittsburgh can combat this depressing distinction.

But Santiago is likely leaving the Steel City. On June 10, Santiago accepted a buyout from the Post-Gazette. This comes on the heels of the paper barring him and fellow Black journalist Alexis Johnson from protest coverage. P-G management claimed that Santiago and Johnson showcased bias because of some social media posts, even though scores of supporters said that reasoning was specious.

Santiago, who graces the cover of Pittsburgh City Paper this week, sat down with CP for an interview to explain why he left and detail a reckoning the entire news media must go through so that the voices of Black journalists can truly shine.

“I can’t work for a paper that treats their employees like this,” said Santiago of his decision to take a buyout and leave. “I don’t see any way to mend the fences.”

The last two weeks have been chaotic at P-G. First, Johnson was told not to be a part of Black Lives Matter protest coverage after she sent a viral tweet that compared trash left after Kenny Chesney concerts to damage done by looters. Then union journalists protested that decision by tweeting in solidarity the hashtag #IStandWithAlexis. Santiago joined that movement and shared his own stories on social media.

Management defended its decision in an open letter written by P-G executive editor Keith Burris. That led to more criticism, and even led the international Newsguild-CWA to call for Burris and managing editor Karen Kane to resign.

These actions come after years of ongoing conflicts between union and management, and what the union alleges is an intentional effort by management to get people to quit the paper in hopes of shrinking the union.

Santiago says his decision wasn’t just about being barred from covering protests. He says that about six months ago he was out with a co-worker who told him that the dysfunction at P-G and the actions of management was making him fall out of love with journalism.

“I felt the same way,” said Santiago, who spoke with CP next to a new Black Lives Matter mural painted next to the Allegheny River in Downtown Pittsburgh. “And I love journalism, but I feel like me and my colleagues are not allowed to do the journalism that we want to be doing.”

Santiago earned degrees from the San Francisco Arts Institute and then a masters from Syracuse University in 2017. He said that over the last few years, he has dedicated himself to photography, including taking money out of his own pocket for projects.

He said he really enjoyed photographing for investigative reporting and lauded the work he was able to do with reporter Rich Lord when he was at P-G. (Lord, like Santiago, also left P-G and now works for PublicSource.)

After initially backing the investigative work journalists like Santiago and Lord were working on, Burris eventually disbanded that team. After that, many reporters were reassigned to different beats. This is when Santiago started to question his place at P-G.

“At that point, what I really wanted to do wasn't really going on,” said Santiago. He adds that many times his images or his stories were not approved by management. He said that overall, he enjoyed his time at the Post-Gazette and relished any opportunity he had to “bring different stories to the paper.”

Despite his own situation being barred from protest coverage, he is actually hopeful that change might come to the country, in terms of race relations. He sees the swift decisions to take down Confederate flags and monuments as a sign that larger change might be on the horizon.

“I never really thought that things would change in this country, at least in my lifetime,” said Santiago. “In a country filled with Confederate flags and monuments, it wouldn't change. But it is slowly starting to happen. In a way, this country is starting to reconcile with its past and people are starting to listen.”

But he isn’t sure that is happening in Pittsburgh. Santiago acknowledges his place in Pittsburgh and says it’s a hard place to be for Black people and immigrants.

“It is disheartening, knowing what Pittsburgh is like, and wanting to see some of that change,” said Santiago, referencing the racism and xenophobia of many parts of the region. “It is almost like the city wants to keep that status quo.”

Ultimately though, he said that Burris and the Block family, who own the P-G, truly don’t understand the decisions they are making and how they make Pittsburgh an even worse place for people of color.

“I think a lot of people project their life experience on other people,” said Santiago, referring to P-G owner and former editor-in-chief. “[John Block] refers to the employees as ‘the help,’ that pretty much says it all.”