"I've been through too many of these to call it a surprise." 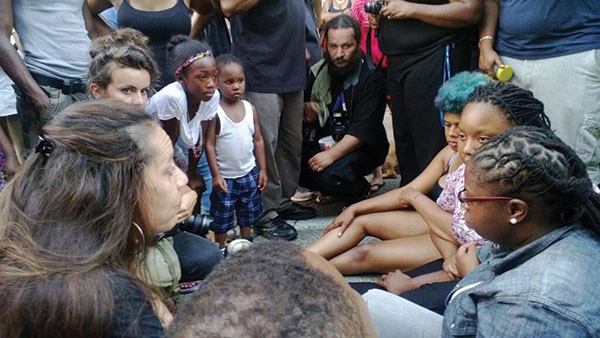 "The verdict was bullshit."

So read the sign held by a hoodie-wearing effigy Rahim Jones brought to Shadyside's Mellon Park on July 14. Jones was among some 150 protesters drawn to the event — and a slightly larger protest at the Hill District's Freedom Corner monument that evening — by a Florida jury's acquittal of George Zimmerman, who had fatally shot unarmed black teenager Trayvon Martin.

If Martin were alive, said Jones, "he would have said the same thing" about the verdict. And he'd have found no disagreement at either rally. Attendees expressed both rage — one speaker said she'd been struggling "to not slap the shit out of a European" — and weariness. For many, including former City Councilor Sala Udin, Zimmerman's acquittal was yet another example of how the justice system devalues the lives of young black men. Udin, who described himself as "devastated, but not defeated" by the verdict, said "I've been through too many of these to call it a surprise."

The tougher question was: What to do about it?

Carl Redwood, a community activist from the Hill District, proposed creating an independent black political party: "We've allowed the Democratic Party to be the lead advocate for us," he told City Paper before the Mellon Park event. But "Obama isn't enough."

At Freedom Corner, speakers proposed doubling down on investments in education, and making black neighborhoods more economically self-reliant. Others urged community members to legally acquire, and learn to use, firearms. "We need to have open discussions about guns and rifles and bullets, and vests, and all that other stuff to protect ourselves," Khalil Raheem argued.

"Why the fuck is this happening?" one of the women, Bekezela Mguni, screamed in a wrenching plea to end the violence. "Don't tell me to move. ... I have nothing to lose. I am tired of feeling worthless."

The protest was spontaneous — "I came here to do what was necessary, and this was necessary," explained protester La'Tasha Mayes — and onlookers began debating the tactic. "Stand your ground!" one observer shouted, invoking the Florida self-defense law at issue in the Martin shooting. Getting arrested is "just what they want from us!" countered another. (Raheem, though among the most militant speakers, was among those calling for restraint from activists.)

City police approached the scene deferentially: "Excuse me!" began the first amplified warning to disperse. Commander Rashall Brackney, who knew several of the protesters from community events, spoke at length with Mguni and others. Kneeling among the protesters, Brackney urged that demonstrators pursue justice in "the right way. We don't do it in a way that causes a disservice or injustice to [Trayvon Martin's] memory."

"We have no desire to go to jail," responded Mguni.

"And I have no desire to take you."

"— We are simply asking for people ... to stop and take a look at the intense violence placed upon our bodies as black people. Because we are not safe."

"It's not that you just can't walk down the street," agreed Bria Adams, a 19-year-old from Manchester who says police raided her home at 5:30 a.m. due to confusion over a suspect's address. "Just being in your own home, asleep, is wrong too."

Brackney waved police off, diverting traffic and allowing the demonstration to continue. Later she told reporters that it was best to "allow people to vent in a positive way" — especially given the light Sunday-night traffic on Centre.

After Brackney's decision, the mood shifted to something between a political workshop and a block party. Protesters called to have pizza delivered to the middle of the street ("just past the police cars") while a core of a half-dozen demonstrators — all black women, some with children on hand — worked collaboratively on a statement. A handful of white supporters sat nearby, in solidarity, as most attendees went home.

Finally, shortly after 11 p.m., the remaining two dozen protesters got up and joined hands. In a statement, the group called for an end to "the criminalization of black bodies."

"We can't continue to go on like this is not happening," Mguni said. "We can't be numb anymore."

But what happens next remains unclear. The group plans a further public statement at noon, Wed., July 17, at the Allegheny County Courthouse.