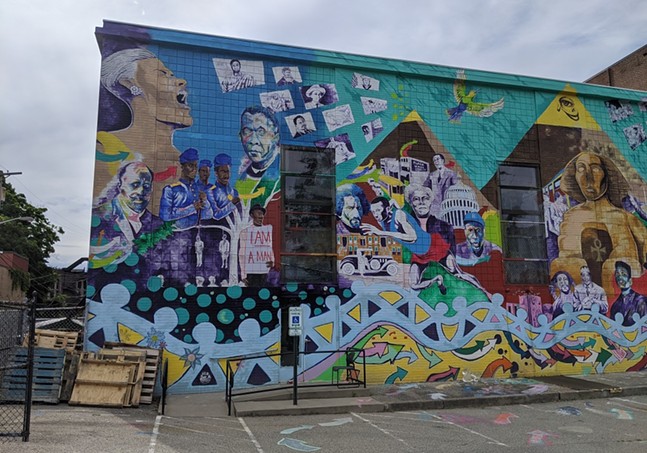 The project includes 10 murals spanning different neighborhoods across Pittsburgh. Painting of the first one will take place in Oakland on Sat., Sept. 26, where Holbrook says anyone is welcome to come and help with a mural dedicated to Breonna Taylor, a Black medical worker from Louisville, Ky. who was shot and killed by police after they mistakenly raided her apartment in March. The case sparked mass outcry and protests across the country, which only grew on Wednesday after a grand jury acquitted the three officers suspected in her death, only indicting one for a lesser charge.

“There's such a need to end police brutality and systemic racism, and these things that keep happening over and over again,” says Holbrook, a professional muralist and executive artist of the Moving Lives of Kids Mural Project. He similarly addressed these issues with a mural in Homewood that covers the history of Black Americans and include images of George Floyd, Antwon Rose II, and other victims of police violence.

The Taylor mural will replace a current one on an Oakland retaining wall located at the corner of South Bouquet and Joncaire Street, which is owned and maintained by the Oakland Planning and Development Corporation, says Holbrook. The work will include huge text that reads “Equality, Action, and Accountability,” all things Holbrook and his team see as solutions to police brutality, systemic racism, and gun violence.

All the Pittsburgh Solidarity for Change murals were designed in collaboration with the communities where they will appear. Every mural will be open to public participation, with all materials being provided. Holbrook assures that there will be plenty of room for painters to social distance.

Holbrook says future murals will include one in Uptown honoring the life and accomplishments of late congressman and Civil Rights leader, John Lewis. One planned for the Hill District will celebrate African-American culture and Black women. Three others will be installed in Strip District.

“We wanted to pick the most visible neighborhoods where the most tourists will come after the pandemic, so the most eyeballs can see it,” says Holbrook.

For the project, Holbrook says he worked with a number of artists representing a variety of identities, backgrounds, and styles. This includes self-described “queer identifying, Chicano artist” Max “Gems” Gonzalez (formerly known as the most wanted graffiti vandal in Pittsburgh), Sara Coleman, Zim Syed, street artist and educator Lil Baby Artworld, and many others. Also involved is hip-hop artist and activist Claude “Paradise” Gray, who Holbrook says will contribute narration for extra content viewers can access by scanning QR codes on the murals.

The murals were also facilitated by the Carlow University Social Justice Institutes. Through that program, students majoring in psychology and criminology will work on the murals, and Holbrook hopes that the project will give the latter a background in the community before they pursue careers in criminal justice.

Besides addressing issues that affect him as a Black man, the Pittsburgh Solidarity for Change murals are a personal pursuit for Holbrook in a different way. He says the project will be dedicated in part to George Gist, a professional portraitist, muralist, and jazz musician who lived in the Hill District and was a mentor to Holbrook. Gist passed away on July 29, 2020.

“He changed my life,” says Holbrook. “I paint with his style. Sometimes I still hear his voice and some of the lessons he taught me.”

Overall, Holbrook believes that encouraging all Pittsburgh residents to participate in the murals, regardless of their race, religion, or political beliefs, provides an opportunity for everyone to converge and confront social justice issues.

“With the election, it's been one of the most divisive times in our history, that I can recall,” says Holbrook. “If any real progress is going to happen, people got to work together.”

Those interested in participating can visit mlkmural.com/live-murals or email info@mlkmural.com for more information.