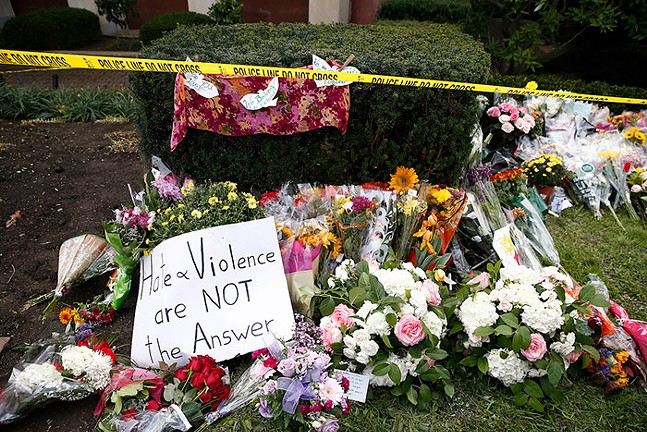 CP photo: Jared Wickerham
A memorial for the victims killed by gun violence at the Tree of Life Synagogue in October 2018
State Rep. Dan Frankel (D-Squirrel Hill) announced today he will host a policy hearing on gun violence Friday, Sept. 13 at 10 a.m. at the University of Pittsburgh William Pitt Union Ballroom in Oakland.

Frankel hopes the event will open a discussion about ways Pennsylvania can address the ongoing epidemic of gun violence. The hearing is being held less than one year after the Tree of Life shooting in Pittsburgh.

“We lost 11 people in minutes that day, and many of those individuals were my friends,” Frankel said at a news conference in Harrisburg on Aug. 16. “Since then, my county alone has lost dozens more lives in gun suicides and homicides.”

Frankel has been vocal about improving gun legislation on Twitter, but he is not the only local politician pushing for comprehensive gun reforms. On Sept. 9, Pittsburgh Mayor Bill Peduto, joined by other mayors from cities affected by gun violence, visited Washington, D.C. to call for a U.S. Senate vote on background check legislation.


Firearm deaths are largely the result of suicide. Gun violence prevention must include mental health considerations alongside broader public policy like ERPO laws & universal background checks. If you or someone you know needs help, contact 1-800-273-8255.https://t.co/333WaUCHP0

Last month, state Sen. Jay Costa (D-Forest Hills) released his plans to push for state legislation that will include universal background checks and a statewide ban on assault rifles.

The hearing hosted by Frankel is one of many being held around the state by the House Democratic Policy Committee to explore the local impact of various issues and garner feedback on policy. In addition to HDPC chairman, Mike Sturla (D-Lancaster), Frankel will be joined by other state legislators, police, and city officials, as well as violence prevention and mental health experts.

The event is open to media and the public.