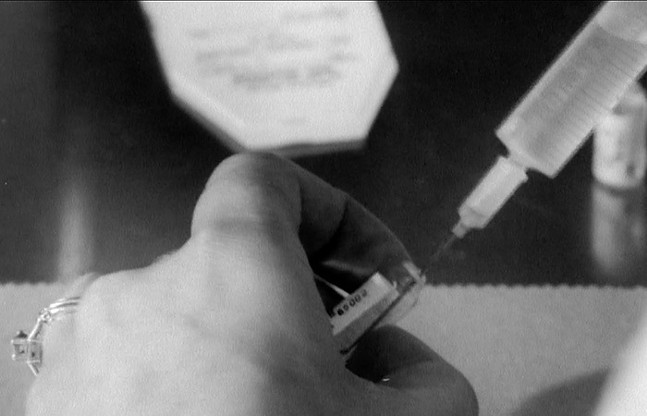 Still from Psychedelia: The History + Science of Mystical Experience
Psychedelics are still viewed with a degree of caution by most of the American public, but that wasn’t always the case. A new documentary coming to Pittsburgh dives into the short-lived period when psychedelic drugs were taken seriously as legitimate research tools.

Pat Murphy’s new film, Psychedelia: The History + Science of Mystical Experience, will screen at the Row House Cinema at 7 p.m. on Tue., April 19 for a special “Bicycle Day” screening.

Murphy keeps Psychedelia quick. The film is only 58 minutes, but it covers a lot of ground. We quickly dive into the history of LSD, mushrooms, and other hallucinatory drugs, and how it was recognized early on by various cultures, tribes, and later on researchers that there could be medical benefits from the drug.

“Psilocybe mushrooms, peyote, ayahuasca, and others have been used for thousands of years among Indigenous people, for a variety of purposes,” Murphy tells Pittsburgh City Paper over email. “Across cultures, psychedelics were always used in a ritual context and were regarded as a sacrament.”

The central thesis of the film is that while the use of psychedelic drugs has become associated with hippies and the counterculture, its basis lies in deep spirituality and a search for healing all across the world.

“The idea of a Schedule 1 substance being used therapeutically in a DEA, FDA-controlled way was very intriguing to me,” says Murphy. “I discovered a whole cast of characters that were unknown to me, and I felt that our whole cultural narrative around psychedelics was misconstrued by the War on Drugs. And so I wanted to tell that story.”

The Row House screening is being presented by the Plant Media Project, a local organization dedicated to ending the stigma around plant-based medicine in and around Pittsburgh.

“As a native to Pittsburgh working in the psychedelic space, I wanted to bring this film to my hometown to educate the community around psychedelics being used as tools for healing,” says Gina Vensel, cofounder of the Plant Media Project in a statement.

Why hold the event on Bicycle Day? Well, despite its name, the day is actually a celebration of LSD use, not transportation. But bicycles hold a special place in psychedelic lore. On April 19, 1943, Swiss researcher Albert Hoffman ingested 250 micrograms of his test compound LSD before taking a bicycle ride where he started feeling the effects to such an extent that he decided the only logical thing to do was explore the potential of the drug more as alternative medicine.

In the years following, there was a boon of research around these drugs. They were considered to handle any number of ailments, including PTSD, depression, and addiction. However, just as soon as progress started, it slowed, due to a combination of political pressure and a switch of the drug being associated with the hippie movement and figures like Timothy Leary.

Psychedelia handles all of these topics and more in its short run time.

“It's been really interesting for me to witness the shifting attitudes around psychedelics even since I started making the film,” says Murphy. “When I first began filming, it was not a subject in the headlines and most people approached it with either extreme skepticism or bewilderment. Now, people seem much more interested and open to the potential of psychedelics.”Psychedelia: The History and Science of the Mystical Experience. 7 p.m. Tue., April 19. Row House Cinema. 4115 Butler St., Lawrenceville. $10. bit.ly/psychedeliapgh