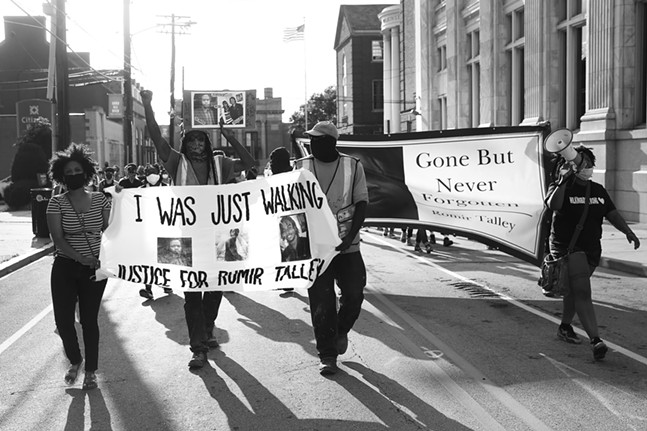 CP Photo: Jared Wickerham
Protesters demand justice and answers in the death of Romir Talley while marching through the streets of Wilkinsburg on Tue., June 30, 2020.
Last December, 24-year-old Romir Talley was shot and killed by Wilkinsburg police. The police claim they were responding to a 911 call and that Talley fit the description given by the caller, who said Talley was armed with a handgun. Talley allegedly ran when confronted, and then police claim that Talley fired at officers first, and police then returned fired, striking him seven times. Talley was declared dead by paramedics minutes later.

Since the fatal shooting, advocates have been demanding answers about what happened that December night. They are skeptical of what police say is the chain of events. CP Photo: Jared Wickerham
On Tuesday, about 40 protesters marched through the streets of Wilkinsburg demanding more answers. Fawn Walker Montgomery of activist group Mon Valley Action said the group was calling for the names of the officers involved in Talley's shooting to be released, that a fair and transparent investigation be brought forth, and that officers be charged in relation to the shooting.

Currently, the Allegheny County police are investigating the matter, but Talley’s family is growing impatient that no progress has been made.

Dana Denson, Talley’s cousin, was at the rally and said her family and the community needs to hear more from Wilkinsburg officials.

“We don’t know anything and we need answers,” said Denson. “It’s been six months.”
click to enlarge CP Photo: Jared Wickerham
The group of protesters were planning on attending the borough’s Public Safety forum, which was to take place on Wood Street. (This is why the protesters were meeting at the Corner of Wood Street and Penn Avenue.) But the event was canceled just over an hour before it was set to start at 5:30 p.m.

Wilkinsburg Mayor Marita Garertt said in a Facebook post that the forum was canceled out of precaution with Allegheny County experiencing rising coronavirus cases. Many of the protesters didn't buy that, saying they believed it was because they were planning on bringing up Talley’s case at the forum.

CP Photo: Jared Wickerham
Denson is skeptical of the mayor because she said Garrett told people that she reached out to the Talley family, when Denson said she didn’t. Denson said Garrett lied.

Walker Montgomery understands the county is handling the investigation, but said that Garrett could answer more questions from the community.

The protesters eventually marched to the Wilkinsburg borough building just a few blocks away. They chanted in the street and navigated traffic without any police escort. “How many times? Seven times,” they chanted in reference to the amount of bullets that struck Talley.
click to enlarge

CP Photo: Jared Wickerham
Garrett was not the only target of scorn for the protesters. They also criticized Wilkinsburg Police Chief Ophelia "Cookie" Coleman, and asked attendees to call her and demand answers about Talley’s case.

One protester who knew Talley as a young child spoke to the crowd and said that if Talley were here today, he would be helping the cause against police brutality.

“He is one of those guys, that would save one of us,” said the man who says he is known by his friends as Peace and Love.

UPDATE: Wed., July 1, 3:20 p.m.:
After the rally in the Wilkinsburg business district, some of the protesters took their demonstration to the street outside of Garrett’s home. Protest organizers asked CP not to join them during this segment, but video footage from social media shows protesters demonstrating and police officers standing on the edge of Garrett’s property.

After more than 30 minutes protesting outside of Garrett’s home, Garrett emerged and was escorted by a few police officers as she walked to her car, which is between her home and the protesters. Video shows that Garrett was carrying a small firearm in her right pocket. (She confirmed this later to WTAE.)


folks eventually showed up to her community . She greeted us with police, her Mom & Her Gun. pic.twitter.com/heoqXPKiE0

She walked through the crowd of about 20-30 protesters, while accompanied by the police, and never removed her firearm from her pocket. This can be viewed 24 minute mark of the video shown below.

After Garrett walked to her car, Garrett’s mother Beverly also apparently got into an altercation with one of the protesters and apparently grabbed a protester recording video. In the video below, this happens shortly after the 25 minute and 30 second mark. Protesters questioned why the police didn’t step in.
Beverly told WTAE that her daughter was carrying a gun because herself and her daughter both feared for their safety. Protesters said they were going to file charges against Beverly after the apparent altercation. And Beverly told WTAE that if charges are filed against her, she intends to fight them.

UPDATE: Thu., July 2, 11:20 p.m.:
Further video evidence shows that apparently before Garrett walked to her car, escorted by police, she sat on the front step of her house. Her mother was closer to the edge of her property. The video doesn't show any police officers in view. At one point, Garrett appears to pull her firearm out of her pocket and show it to the demonstrators. She quickly puts it back in her pocket.