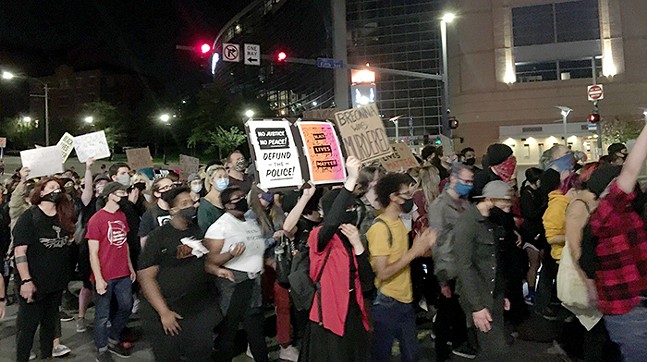 CP photo: Hannah Lynn
Pittsburghers march in honor of Breonna Taylor on Wed., Sept. 23, 2020.
As part of a nationwide night of action, protesters gathered at Freedom Corner in the Hill District on Wed., Sept. 23 to voice their anger about the lack of charges against the Louisville, Ky. police officers who shot Breonna Taylor in March.

The protest of about 200 people began at Freedom Corner before marching through Downtown and ending up at the Allegheny County Courthouse where organizers spoke to the crowd for around two hours.

When the protest began at Freedom Corner, the crowd gathered in a circle and listened to organizer Gam Craft, who told everyone to be careful about how they interact with outside agitators, since it's often the organizers who end up facing consequences (several organizers are currently facing criminal charges, and one, Lorenzo Rulli, is currently being held at the Allegheny County Jail.)

Dannielle Brown, the mother of a former Duquesne University student who has been demanding answers about her son's on-campus death, spoke to the crowd about Breonna Taylor's death and her experience protesting. She called Taylor's death "a casualty of war."

On March 13, Taylor was killed after three Louisville officers used a "no-knock" search warrant at her apartment shortly before 1 a.m. Taylor’s boyfriend, Kenneth Walker, who was in bed with her, said when they heard pounding at the door, they asked who it was and heard no response. Shortly after, the officers burst the door open, and Walker fired a single shot from his handgun.

After, all three officers then fired more than two dozen rounds in response, hitting Taylor five times. She died in her hallway. 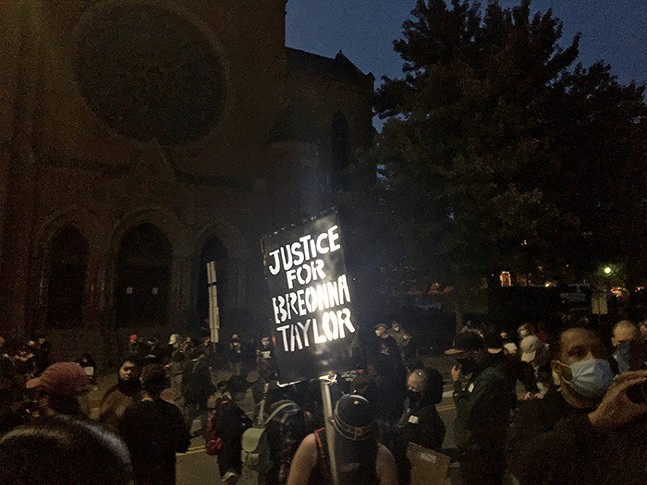 CP photo: Hannah Lynn
Pittsburghers march in honor of Breonna Taylor.
Two of the officers were placed on administrative reassignment after the shooting. Detective Brett Hankison was fired for firing indiscriminately into Taylor's apartment.

Yesterday, a Jefferson County, Ky. grand jury indicted just one of three Louisville Police officers in the March 13 fatal police shooting of Taylor. Hankison was indicted on three counts of first-degree wanton endangerment. A wanton endangerment charge in Kentucky is a felony and carries a penalty of one to five years in prison. The two other officers that fired guns in Taylor's apartment were not charged.

Kentucky Attorney General Daniel Cameron told the Louisville Courier-Journal that the grand jury decided homicide charges were not applicable to the officers because an investigation showed that two officers, Jonathan Mattingly and Myles Cosgrove, were justified in returning deadly fire after they were fired upon by Walker.

In Pittsburgh last night, the protesters marched from Freedom Corner, past PPG Paints Arena, before ending up at the entrance of Duquesne's campus. The crowd circled up and Brown spoke again about her personal protest, saying that every day she's on Duquesne's campus, she relives the death of her son, Marquis Jaylen Brown, who died after falling from a dorm room window in 2018.

"I'm trying to catch my baby in my arms all the time," Brown said.

The crowd then marched to the County Courthouse, where around 10 organizers spoke to the crowd. The organizers included Craft; Dena Stanley, founder of Trans YOUniting; Miracle Jones, of 1Hood; and others, who spoke about a wide range of issues, from complacency of white protesters to the physical and mental health of Black women.

Craft told the crowd that it was not enough to pay attention to Black lives only when someone has died or when tragedy has occurred.

"Do not wait until we are dead to say our names," they said.

Other speakers brought attention to the poor quality of life for Black women in Pittsburgh, referencing a 2019 study from the Pittsburgh Gender Equity Commission, which found that Pittsburgh is one of the worst cities in the country for a Black woman to live, based on factors including fetal mortality rate and poverty rate.

Stanley criticized the protesters, and other organizers, for showing up to protest for Taylor, who isn't from Pittsburgh, but not showing up to the weekly Trans YOUniting protests, which have been happening every Thursday.

Organizers urged protesters to take more action by showing up more often, as well as talking to family and friends who disagree, registering to vote, sitting in on City Council meetings, and other forms of direct action.

Some people inside are flashing their lights and waving through the windows as the crowd sings to them. pic.twitter.com/Z33LX62mOU

There were no significant confrontations with police or counter protesters during the demonstration. The protest began to wrap up around 11 p.m., after a group of a group of protesters broke off to "sing a lullaby" to Rulli outside the Allegheny County Jail.