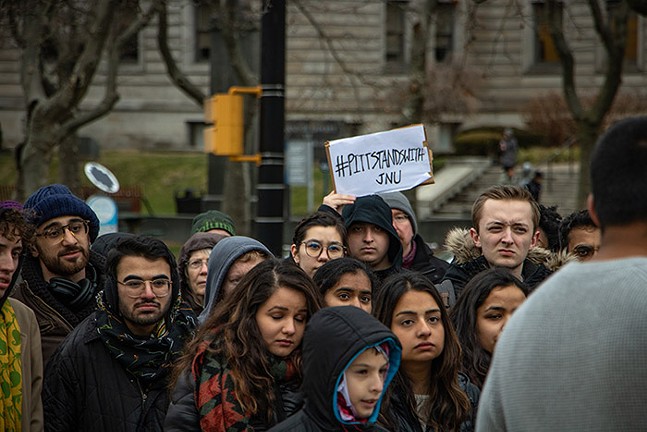 The rally was in reaction to the passage of the Citizenship Amendment Act (CAA) in India in December, which creates a path to citizenship for immigrants of Hindu, Sikh, Buddhist, Jain, Christian, and Parsi faiths. However, many see CAA as anti-Muslim, as the act specifically excludes people of Muslim faith. In August, India's Prime Minister Narendra Modi, a Hindu nationalist, cracked down on the Muslim-majority state of Kashmir, including redacting its semi-autonomous status and cutting off internet access.
click to enlarge 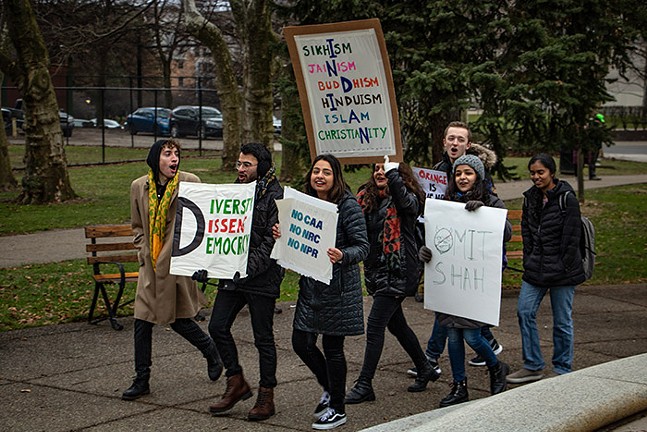 It began with chants of "azadi," a slogan meaning freedom, originating in Pakistan, which has especially gained popularity in the current era of protests. Multiple speakers pointed to India's constitution, which designates the country as a "sovereign, socialist, secular, and democratic republic."
click to enlarge

CP photo: Megan Gloeckler
Pittsburghers rally against religious oppression in India on Sun., Jan. 26, 2020.
Abhishek Viswanathan, a grad student at Pitt opened the speaking portion with an overview of the current situation. "India's prime minister, Narendra Modi, espouses a vision of India as a Hindu nation and has overseen an environment of brutal attacks on Muslims and lower caste people all over the country,” he said. “Even though Muslims are a minority population ... that still translates to more than 200 million Muslims in India. That's a staggering number of people who are going to be disenfranchised and are living in an environment of complete repression and fear of what this government, which holds majority power in our country today, is going to do to them.”

Viswananthan also referenced that at least 25 people have been killed in the protests in India in December, and thousands have been arrested.

Krystle Knight from the Thomas Merton Center spoke on the importance of showing up as an ally. "You don't have to be Muslim, you don't have to be Indian to know that this is a problem, and that's why we need to be out here in solidarity."

Pittsburghers rally against religious and cultural oppression in India on Sun., Jan. 26.

Click to View 21 slides
Wasi Mohamed, former executive director of the Islamic Center of Pittsburgh, and local director of economic justice initiative Forward Cities, spoke about how his family in Chennai, India, is going out to protests. "It's difficult to think 'what can we do a world away,' but I think that's one thing that they love to see," said Mohamed. "Groups like us gathering really matters to them. They hear about it, they see it, and they figure other people care too."

Mohamed also acknowledged that this would not be the last protest about this issue, or about other issues around the rise of fascism. 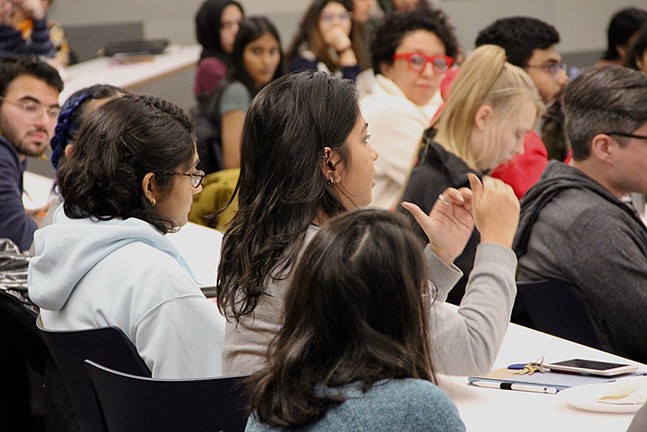 Photo: Lissette Ferrá
Fascism Against India teach-in at the University of Pittsburgh on Fri., Jan. 17
"I just want everybody to affirm themselves and commit themselves to meeting the people around them, building the relationships and the solidarity necessary to keep the momentum going. Commit to educating people about this issue, and any issue of oppression," he said.

The protest came a week after a Fascism Against India teach-in at Pitt, which educated participants on the issues at hand with presentations and testimonies from people who had experienced the protests in India first-hand, including video calls with activists in India.