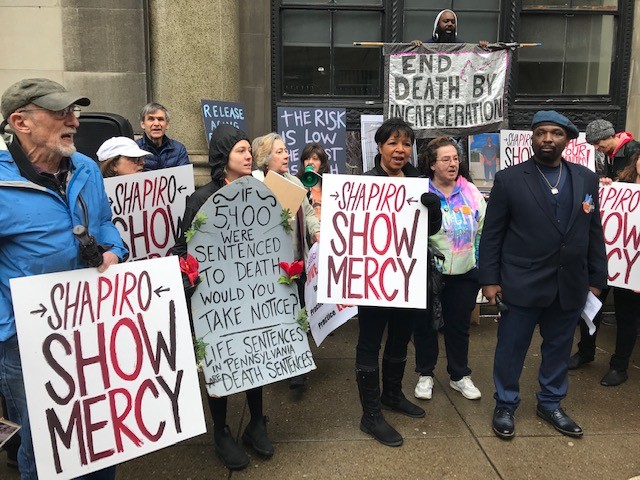 Despite saying he believes in second chances for prisoners, the Pennsylvania Capital-Star found that Shapiro has the lowest rate of yes-votes on commutations among those on the Board of Pardons. Five members sit on the state board, and all must vote yes in order for a prisoner to receive a pardon.

Ricky Olds served nearly 40 years of a life sentence after being convicted as an accomplice to murder when he was 14 years old. He was released in 2017 thanks to a state Supreme Court ruling that said juveniles can’t be sentenced to life without parole. He spoke at the rally and called on Shapiro to stop blocking commutations for lifers, saying that his story is not unique among inmates in Pennsylvania.

“We are here to let Shapiro know that he should not block commutation,” Olds said to the crowd. “We understand that in times past, to let people out is political suicide, but that no longer the case.”

Shapiro is up for re-election this year and has indicated he has ambitions for higher office, possibly the governorship. He has defended his votes against commutation. In a statement, the AG’s office said Shapiro has voted for more commutations than any other Pennsylvania attorney general in the last 25 years.

“AG Shapiro’s record is clear — he is a firm believer in second chances. That is a proven fact,” said his office in a statement. “He has voted for 472 pardons to help people expunge their records, wipe the slate clear, and continue to contribute to our communities without the plague of a criminal record."

The office also said Shapiro worked with the Board of Pardons to make the process more accessible by eliminating application fees and simplifying the application. Shapiro also supports removing the Board’s unanimity requirement and replacing it with a majority rule of 3-2 to vote in favor of commutations.

Several speakers at today’s rally echoed this sentiment that the current criminal justice system in Pennsylvania is failing to live up to their expectations and that Shapiro is not doing enough to make meaningful change in Pennsylvania.

Jane Hein, who has a niece sentenced to life in prison, said that taxpayers will spend about $3 million keeping her niece in prison over her lifetime.

“The criminal justice system in Pennsylvania does not resemble love,” said Hein. “Commutation should bring love and mercy back to Pennsylvania.”

According to a study from New York University, Pennsylvania law automatically imposes life imprisonment for first- and second-degree murder, including felony murder, which requires no intent to kill. The only way for lifers to be paroled is through clemency from the Board of Pardons.

Before 1980, dozens of life-sentences were commuted each year. Since 1980, however, clemency has gone virtually unused. As a result, the lifer population in Pennsylvania prisons has skyrocketed.

In 2017, there were more than 5,400 people serving life sentences in Pennsylvania prisons, including more than 1,200 who were not convicted of taking another person’s life.

Hein says that since 1995, only 1% of life-sentence applicants have received commutations.

“Progress is reviving the commutation process, not hitting a brick wall,” said Hein. “Progress shouldn’t be stopped by Shapiro.”

But Shapiro’s office has stood by his record.

“When AG Shapiro is reviewing cases, several factors play a role in his decision-making as he reviews the materials the Board has access to,” a statement from his office reads. “Some of this information is publicly available and some is not. He reviews hundreds of documents and participate in in-person interviews with those applying for commutation.”