A Pittsburgh Police officer filed charges against a protester who lost his eye during a 2020 Black Lives Matter demonstration after police shot him with a rubber bullet. That protester says the same officer accosted him during his preliminary hearing. 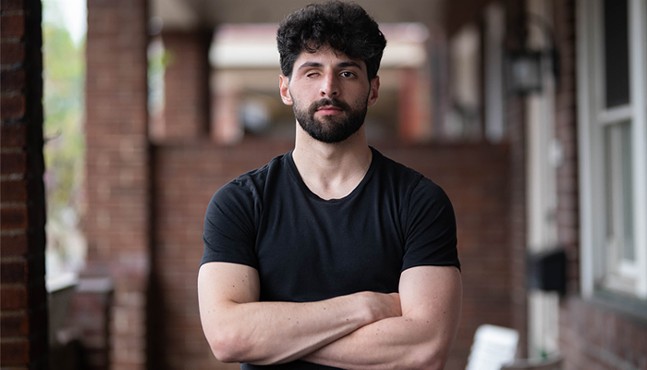 Photo: Tim Murray
Alex Horell
Alex Horell lost his right eye last year. During a Black Lives Matter protest in Downtown Pittsburgh on May 30, 2020, Pittsburgh Police fired a less-lethal projectile — either a rubber bullet, a bean bag, or a sponge round — at Horell, striking him in the face. Horell, who lives in Pittsburgh's Morningside neighborhood, believes it was a rubber bullet, after initially thinking it was a beanbag.

“I really distinctly remember being hit, that is what I really remember,” says Horell, who says he blacked out momentarily after being struck by the object. “Then I remember people shouting ‘Man down!’ and not realizing that it was about me. I remember people looking at my face coming to, like they were looking at a dead person. That is a pretty vivid memory.”

Horell was particularly shocked at the level of confrontation from the police, since he says he was marching with a group and didn’t participate in any looting, violence, or property damage. The day of the occurrence on May 30 was Pittsburgh’s first and largest Black Lives Matter protest, following the death of George Floyd.

Two months later, after Horell’s lawyer sent a letter to the Pittsburgh Police about a possible lawsuit against the department, Horell was charged with felony riot, three misdemeanors, and two summary charges. The arresting officer listed in the court documents for those charges was Pittsburgh Police officer Sean Stumpf.

Earlier this month on April 5, 2021, Horell was sitting in an Allegheny County courtroom when he was detained, handcuffed, and taken out of the room shortly before he was to address the judge during his preliminary hearing. He says he was first accosted in the courtroom by officer Stumpf, who claimed Horell was taking photos of police officers on his phone. Horell says he was just using his phone to text his roommate, and he eventually showed officers his phone, which contained no photos of the courtroom, and he was released.

But given the charges filed against Horell that only came after his lawyer contacted the Pittsburgh Police, and the recent confrontation with Stumpf in the courtroom, Horell and his lawyer Fred Rabner are speaking out, and calling out Stumpf and the police department.

“This is how the officers behave when they think they are protecting the city,” says Rabner.

Rabner says Stumpf has a bad reputation in the Pittsburgh Police department and is known for being overly aggressive and losing his temper.

Horell was charged with felony riot, misdemeanor obstruction of law enforcement, misdemeanor obstruction of public passages, misdemeanor failure to disperse, summary disorderly conduct, and summary scattering of rubbish. These charges were filed on Aug. 6, 2020, more than a month after Rabner sent a letter to the Pittsburgh Police and other agencies on behalf of Horell on June 29, 2020, requesting to preserve documentation for a possible lawsuit. Stumpf is listed as the arresting officer for these charges against Horell, and he filled out the criminal complaint for the charges.

According to the criminal complaint against Horell on July 14, 2020, officer Stumpf was investigating the Black Lives Matter protest events of May 30 by watching surveillance video. The complaint reads that Stumpf observed Horell taking “an active role in the riot” by removing a steel sidewalk trash can holder and using it to catch smoke from tear gas canisters and attempted seven times to toss canisters back at police officers.

Horell says that some people in the crowd may have been casting aside tear gas canisters to avoid inhaling smoke. He says he doesn’t remember doing the same, but says he might have. But he denies picking any up and tossing them towards officers. He also pushes back on any allegations that he was involved in a riot, and says that he was part of a peaceful march through Downtown and the North Side, until the group was met by a riot-gear clad line of Pittsburgh police officers. There were reports of some broken windows and looting in Downtown during this time on May 30, but news reports show that police fired tear gas and flash grenades possibly 20 minutes before reports of any broken windows and looting.

Horell also says he wasn’t involved in any property damage, and the criminal complaint doesn’t mention him involved in breaking windows or looting. He says the police escalated the situation, and he never heard any failure to disperse orders.

“They were initially just firing their weapons into the air and lobbying tear gas at us,” says Horell of when the crowd confronted police at Smithfield Street and Fifth Avenue. “I feel like the rubber bullets were an escalation because we weren’t doing anything bad. It was, like, they were, like, alright we are done with this. Light them up.’”

According to cell phone video footage of events on May 30 obtained by Pittsburgh City Paper, a tear gas canister is seen rolling across the pavement towards the line of police officers at Smithfield Street and Fifth Avenue, and then two officers at the front of the line can be seen pointing over in the direction of the protesters, and apparently directing an officer armed with some kind of less-lethal projectile gun. That officer then fires the less-lethal projectile gun, with the barrel perpendicular to the ground.

Rabner believes this video shows the officer shooting Horell and hitting him in the eye with a less-lethal projectile. According to Pittsburgh Police policy, officers using less-lethal weapons are prohibited from targeting the head or neck, unless deadly force is justified.

A lawsuit filed anonymously on Jan. 27, 2021 against Pittsburgh Mayor Bill Peduto and the Pittsburgh Bureau of Police alleges that police used excessive force against protesters on May 30 and June 1.

According to that lawsuit, “Following some limited and isolated reports of property damage, [Pittsburgh Police] decided to use chemical gas, rubber bullets, and other projectiles, pepper spray, flashbang grenades, and other riot control agents indiscriminately against everyone present on May 30, 2020, including peaceful protestors and nonviolent bystanders, unprovoked and without justification. These weapons were also used in a manner not intended by the manufacturers and were used with the intent to harm innocent individuals.”

Horell has had his preliminary hearing rescheduled several times since files were initially charged. Rabner says that Pittsburgh Police have promised to show video of Horell committing the claims made by Stumpf, but have not yet produced the video. Rabner says the best evidence rule requires that prosecution must bring their best evidence forward to the preliminary hearing.

On April 5, Rabner again requested to see the video, which the prosecutors say was brought in a flashdrive but wouldn't play because of a software malfunction. After deciding to ask for another continuance, Rabner left the courtroom to take a call from another client, and that is when Horell says he used his phone to text his roommate.

Horell says shortly after that, Stumpf confronted him about using his phone, getting very close to him, and said, “Give me your phone, it’s against the rules.” He says he was then taken out of the courtroom by officers and told that he had no rights to an attorney.

When reached and informed about Horell and Rabner’s claims against Stumpf and the police department, Pittsburgh Public Safety spokesperson Cara Cruz said that Horrell was not arrested, but was “removed, detained, reminded of the policy, and let back into the courtroom” and that “there was no need for a lawyer as he was not arrested.”

Cruz also sent three photos of signs in Allegheny County courtrooms that remind people that use of electronic devices and cell phones is prohibited.

Olyvia Adkins was virtually observing the magistrate court the day that Horell was confronted and detained by police officers. She didn’t see Horell being detained by officers, since the camera was focused on Magisterial District Judge Mik Pappas and not the defendant area. But she says when Horell was detained, there was visible chaos among those in frame, and that people visible were confused about what was transpiring.

Adkins has been court watching on a volunteer basis for the Abolitionist Law Center, and also has experience watching Washington County Courts during a legal internship. She says the cell phone rule is more loosely enforced than being quickly detained upon use, and officers usually ask three or four times for defendants not to use their phone before escalating the situation.

“I have spent a lot of time in Magisterial District Court, and it is not common for officers to arrest them,” says Adkins. She also says that when someone is taken into custody, the judge is informed beforehand, and it is rarely a surprise to anyone in the courtroom.

According to a court recording obtained by City Paper, Judge Pappas was taken by surprise when Horell was detained.

“Unbeknownst to the court, without any prior notice to the court, the defendant in this case was taken into custody in the courtroom by [Allegheny County Sheriff's Deputy Bobeck] and other deputy sheriffs,” said Pappas on April 5, according to the official court recording. “It wasn't clear to me why it happened, when it did, or what was going on. And I was taken aback by this, as were others in the courtroom. I am not sure if there was a warrant or an immediate public safety risk was present. I am not sure what occurred or didn't.”

Cruz didn’t confirm that Stumpf was part of the officers who detained Horell, instead saying that “Mr. Bobeck detained Mr. Horell for being in violation of an order of the court for Allegheny County that is clearly posted in several locations in the MCB stating that the use of electronic devices and cell phones is strictly prohibited for both civilians and officers.”

When asked about Stumpf’s involvement in Horell’s April 5 detainment, and Stumpf’s record, Cruz said that the Public Safety department “does not comment on unsubstantiated claims or conjecture.”

According to the official court recording, Rabner said on April 5, after Horell was taken into custody and then released, that officer Stumpf was part of the arrest.

“When I came back, my client had been arrested. What I am told is that officer Stumpf and also Deputy Bobeck, as well as other deputies, arrested him, accusing him of something, taking a picture,” said Rabner on April 5. “I think Officer Stumpf told a sheriff that he took a picture in the courtroom.”

Rabner says the whole situation surrounding Horell’s charges and his detainment on April 5 from the same officer who filed a criminal complaint against Horell is “an atrocity.”

On April 5, the chaotic situation even prompted Pappas to deliver a short speech on the importance of courtroom procedure and the necessity for the court to be a place of impartiality.

“I know I haven't had my procedural justice speech in a while in this courtroom, but everybody needs to perceive and believe that this process to be fair and impartial,” said Pappas on April 5. “And when it comes to this court, they need to be treated fairly and that they will be safe in this space. Unless there is an immediate public safety concern of some kind, I communicated to the deputies that I would like to be informed if someone is being taken into custody.”