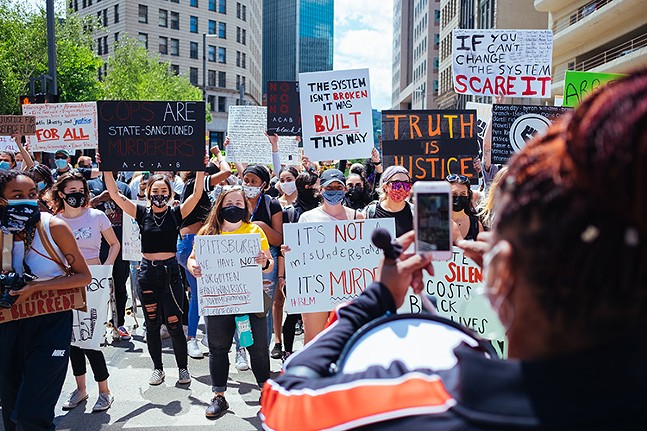 More than 3,000 people — a crowd so large that it filled a space larger than a city block — attended the march, which started at 2:30 p.m. at the corner of Liberty Avenue and Sixth Street. For nearly two hours, the crowd marched and chanted peacefully throughout the streets.

Before the evening ended, however, the demonstration took a turn for the worse; but only after organizers told protesters to go home, did a few people in the crowd start to damage property.

Two police cars were set ablaze around 5 p.m. near PPG Paints Arena in Uptown. And after all the marchers appeared to disperse, fewer than 100 people headed back Downtown after 6 p.m. and smashed windows at some businesses, began to loot, and clashed with police.

During the rally, Paul Spradley, a Pittsburgh-area resident participating in today's march, spoke when the protesters stopped on the corner of Wood Street and Fifth Avenue. He called for collective action to address issues facing Pittsburgh’s Black community. 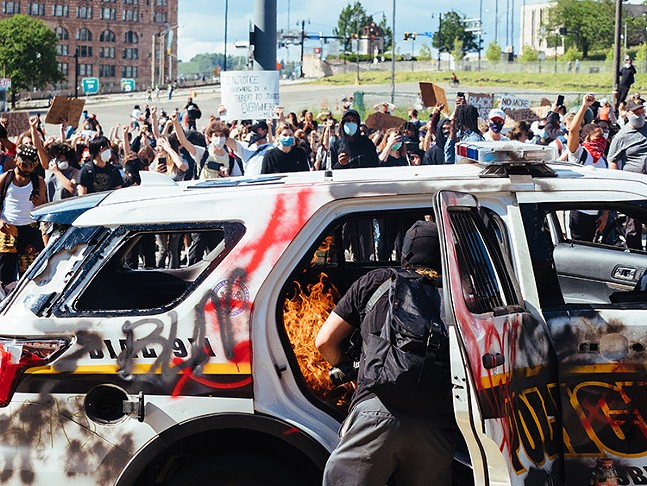 CP photo: Jared Murphy
A police car set on fire outside PPG Paints Arena on Sat., May 30.
“The thing we don’t need right now is your sympathy, we need your action,” said Spradley, urging protesters to advocate for a better education system to help uplift the Black community, and to combat gentrification, which negatively affects Black and Brown people in Pittsburgh.

On May 25, Minneapolis Police officer Derek Chauvin pinned Floyd to the ground, pressing his knee into Floyd's neck until he died. A viral video of the incident captured Floyd saying "I can't breathe" numerous times. Floyd was unarmed and confronted by police over an alleged forgery violation. Four police officers were fired over the incident, and Chauvin was charged with third-degree murder and manslaughter. Protests erupted in Minneapolis and several other American cities over multiple days and nights. Protesters clashed with police, who fired tear gas into the crowd. 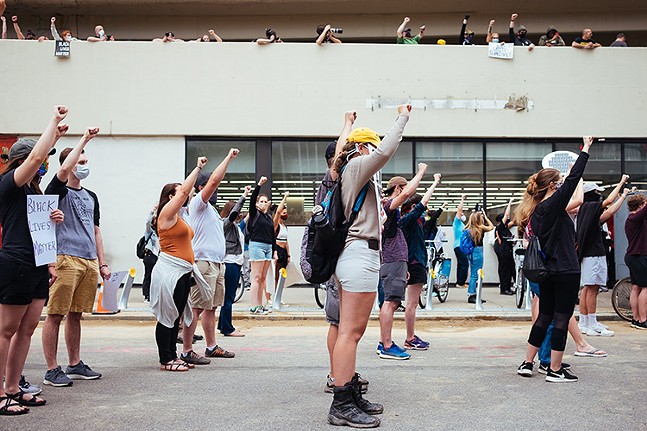 CP photo: Jared Murphy
Thousands gather in Downtown Pittsburgh on Sat., May 30 to protest the death of George Floyd.
The Pittsburgh protest was organized by multiple groups, though none have identified themselves as the lead organizers. The Facebook event for the protest is hosted by the Steel City Autonomous Movement (SCAM), who say that they are only a platform for boosting other events, and that the protest is "the combined efforts of a socially and politically diverse set of people."

In a collective statement sent to City Paper from protest organizers, identifying themselves as The Youth of Allegheny, they cited goals of reforming police departments and eradicating white supremacy from law enforcement.

This is not the first time Pittsburgh has organized protests against an incident of police brutality that happened elsewhere, as there have been local protests surrounding the murders of Mike Brown, Eric Garner, Philando Castile, and others.

Brandi Fisher, of the local group Alliance for Police Accountability, also spoke to the thousands in the crowd, hoping these protest efforts will be translated into building power for advocates for police and criminal justice reform.

“We cannot allow people to divide us, to distract us from the real enemy,” said Fisher.

Throughout the first two hours of the march, police presence was minimal. The Pittsburgh Police appeared to form a very large perimeter around much of Downtown and avoided confrontation with the protesters. Police were barely seen during the march, and some on horseback followed the protesters from about a block behind.

According to protest organizers, the marchers were told to disperse and head home when they reached the north side of PPG Paints Arena in Uptown. After organizers told the crowd that the protest was over, a small percentage of the protesters started to damage an empty police vehicle that was parked on Centre Avenue.

According to social media posts, the first damage to the vehicle was red spray paint, which was applied by someone who appears to be a white man. A video shows this white man damaging the window of the police vehicle, and being told by other protesters that he is "not helping." The white man then flips off the other protesters.

After that, some people smashed the windows of the vehicles with baseball bats and skateboards. Eventually, a group of horse-mounted police officers arrived and surrounded the damaged vehicle.

Several people then shouted at the officers, and some threw plastic water bottles at the officers. The mounted officers then fled the scene. After they left, a man who appeared to be white, though he was wearing a scarf covering most of his face, loaded the police car with flammable material, and then set it ablaze.

Directly after, some people spray painted the Mario Lemieux statue in front of the PPG Paints Arena. A witness told City Paper that it was carried out by a white person.

During these incidents, most of the large crowd dispersed and thousands of marchers left the scene. Several of the protest organizers continued to tell people to head home and that the protest was over.

Pittsburgh Mayor Bill Peduto also shared a post from his former chief of staff Kevin Acklin, who now works for the Pittsburgh Penguins, who said the damage of the police car on Centre Avenue was started by white men who were not affiliated with the protest organizers.

“[They] hijacked a peaceful, march for justice and exploited it for their own selfish agenda,” tweeted Peduto.


Important first hand account from inside PPG Arena. The vandals are not part of the young Black Leadership that organized this March. They are anarchists, hell bent on chaos and destruction. The hijacked a peaceful, march for justice and exploited it for their own selfish agenda. pic.twitter.com/GDQicT2Jo5

About 30 minutes after the first police vehicle was set on fire, what was left of the protesters walked along Washington Place and were confronted by a line of police. There were about 200 protesters left at this point.

“We wanted everyone to be safe,” said Fisher. “They did not listen to our youth organizers when they did this.”


One of the organizers yelling at people apparently involved in property damage. She is visibly upset. She also yelled at a white man before I started taking this video. pic.twitter.com/8IgJpaKwMO

After the second police car burned, the crowd dispersed and many people went home. Less than 100 people, however, headed back Downtown. That is when more property damage and looting started. Windows were smashed at storefronts on Smithfield Street. Windows of a state-run liquor store were also smashed and a Downtown CVS was looted.

Several police vehicles, including SWAT cars, were dispatched to the corner of Smithfield and Oliver. There were loud bangs that sounded like gunshots apparently coming from that location. According to WESA's Bill O'Driscoll, police fired tear gas and rubber bullets at protesters.

Pittsburgh Police say that several officers and some local journalists were injured during skirmishes with protesters who had traveled Downtown. Pittsburgh Public Safety Director Wendell Hissrich says he believes the people causing property damage Downtown and getting in confrontations from police are not from the city of Pittsburgh.

At a press conference, Pittsburgh Police Chief Scott Shubert insinuated the protesters Downtown were anarchists and was upset that they distracted from the peaceful protest.

"This was a peaceful protest. We watched and we saw it and we saw other people leave because they saw what they were doing,” says Shubert. "We will look at every video we have and find the ones who are responsible for a lot of this. And I am so angry at the fact that some segment hijacked this and brought some of the youth and brought them into the mix." 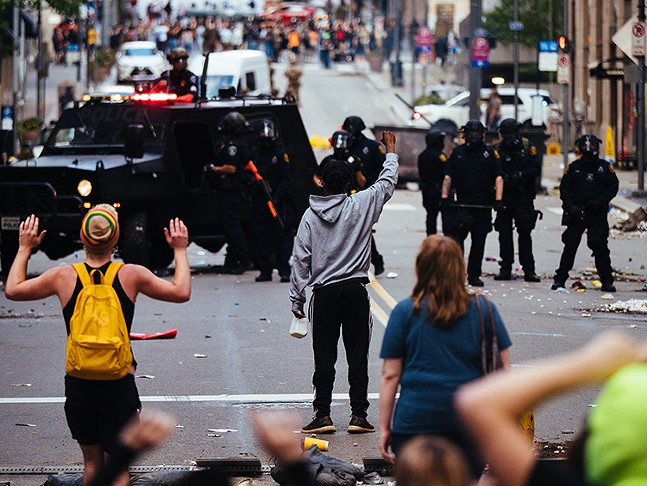 CP photo: Jared Murphy
The scene in Downtown Pittsburgh on Sat., May 30.
At this point, it appears hard to determine exactly who instigated the property damage, looting, and violence Downtown. However, it seems more clear that those protesters are not affiliated with the groups that organized the peaceful march this afternoon.

Because of the property damage and violence, Pittsburgh Police have set a curfew starting tonight at 8:30 p.m. and running until 6 a.m. in Downtown Pittsburgh. That curfew will also run from 8:30 p.m. to 6 a.m. starting again on Sunday night. Port Authority of Allegheny County has also suspended all bus and light-rail service for tonight.


Pittsburgh Public Safety reports that dozens of businesses Downtown were damaged and/or looted this evening, and police have made dozens of arrests.

One of the organizers yelling at people apparently involved in property damage. She is visibly upset. She also yelled at a white man before I started taking this video. pic.twitter.com/8IgJpaKwMO