Proposed legislation could increase protections for victims of domestic violence

“Guns and domestic violence are a deadly combination, and the current law is just not enough.”

In 2002, Deborah Murphy was taken hostage by her estranged husband.

The man entered her home after shooting through the basement door. Police were called to the scene, and Murphy’s 1-year-old son and 3-year-old daughter were rescued. But Murphy was held captive at gunpoint in the home for five hours.

During her captivity, Murphy was raped multiple times. Several negotiation attempts by police failed. And when Murphy’s estranged husband had had enough, he announced he was going to kill her. Moments later, a SWAT team burst into the home and shot him. He’s now serving 20 years in prison.

“It was the scariest moment of my life,” Murphy says. “It changed me forever.”

At the time of the attack, Murphy had a protection-from-abuse order against her estranged husband. The two were going through divorce proceedings, and he had been physically violent in the past. But Murphy says the PFA order did little to protect her.

“I had the PFAs filed, but to me they’re pieces of paper,” says Murphy. “If someone wants to do something, they’re going to do it.”

But a recently proposed bill in the Pennsylvania legislature could protect domestic-violence victims like Murphy who file PFA orders against their abusers. Senate Bill 501 would bar gun possession by all domestic abusers subject to PFAs and require them to turn in their guns to licensed dealers or law-enforcement officials.

The bill would have done little to help Murphy — her husband was already barred from possessing firearms because of a prior felony conviction — but for thousands of other victims, it could be lifesaving.

“The intent of this change in law is to enhance safety for parties and their children in domestic-violence and PFA situations,” state Sen. Thomas Killion, (R-West Chester), who co-sponsored the bill, said in a statement. “Enhancing their safety during these difficult times helps not only these families but also law enforcement charged with overall public safety.”

According to the Women’s Center and Shelter of Greater Pittsburgh, firearms account for more than half of all domestic-violence-related homicides in the state over the last decade. And research indicates the presence of a gun in a domestic-violence situation makes it five times more likely that a woman will be killed.

Under current Pennsylvania laws, only one in seven PFA orders requires firearms to be turned in, which accounts for just 14 percent of all PFA orders issued. According to the journal Injury Prevention, cities see a 25 percent reduction in intimate-partner gun homicides when states pass laws restricting access to firearms by people with an active protection order against them.

“We have seen countless women who come to us while actively recovering from being shot by the person who claimed to love them,” says Karaczun. “They are scared. They are scarred. And it’s often difficult for them to determine which is worse — the emotional pain or the physical pain. They’ve dodged death. Their partner or their ex-partner, typically after years of escalating abuse, has tried to kill them.

“If Senate Bill 501 is not passed, those abusers and many like them will continue to have easy access to their guns, to shoot, injure or kill their victims, and as we know sometimes happens, their children. Guns and domestic violence are a deadly combination, and the current law is just not enough.”

Senate Bill 501 has received bipartisan support. And Pennsylvanians seem open to it as well, according to the results of a SurveyUSA survey released earlier this month. Eighty-two percent of the 800 people surveyed support prohibiting gun sales to anyone with a PFA order against them. 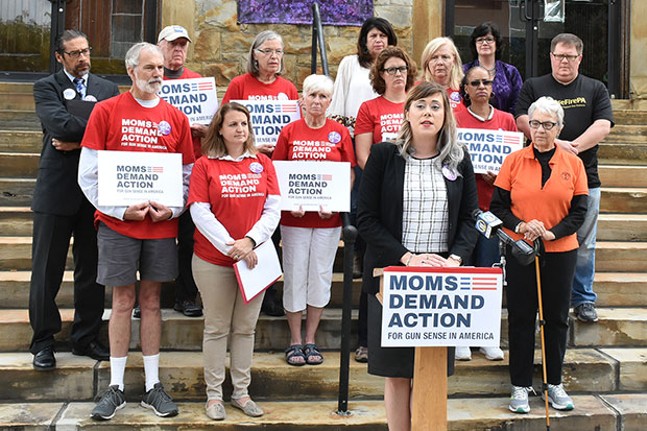 “We are [for] gun safety, and we believe respecting the Second Amendment goes hand in hand with gun-sense laws,” says Jenna Paulat, volunteer with Moms Demand Action. “We believe in gun sense, the simple idea that we can all do more to keep our loved ones and neighborhoods safe from the ever-present threat of gun violence.”

In Pennsylvania in 2016, of the 102 people who died as a result of domestic violence, 56 percent — 57 people — were shot. Two of those victims were police officers who were killed while responding to domestic calls.