"We need a lot more research into the long-term health risks before we start drilling under our public parks." 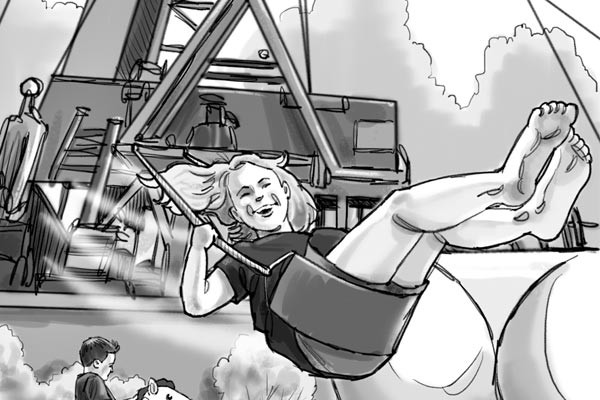 Kathryn Strang clearly remembers her reaction when her mother told her that Allegheny County officials were contemplating drilling for natural gas beneath her beloved Deer Lakes Park.

"I was so mad I started hitting my fists on the table," the 8-year-old said after she spoke in front of Allegheny County Council Nov. 6.

Kathryn, who a year ago started a local environmental group with her younger sister Elizabeth, lives less than a half-mile from Deer Lakes Park. Her family uses the park regularly, for hiking and biking as well as watching wildlife and playing on the playground.

Deer Lakes is the latest battleground in the controversy over drilling for gas in the Marcellus Shale, a layer of stone a mile beneath the earth's surface. Such drilling involves "fracking," the use of highly pressurized fluids to break up the rock and release gas deposits.

Skeptics worry about potential water and air contamination from that practice. "There are just too many unknowns" about the drilling process, says Kathryn's father, George, who accompanied his children to council along with his wife, Joy. "There are a lot of homeowners in the area that use wells for water. And what about air quality?

"I just think we need a lot more research into the long-term health risks before we start drilling under our public parks."

Concern about drilling in county parks began bubbling up late this summer, when Allegheny County Executive Rich Fitzgerald issued a request for proposals to drill under Deer Lakes Park in Frazer Township.

Under Fitzgerald's proposal, no well pads — the equipment on the surface that forces fracking liquid down and brings gas up — would be allowed on county land. Drillers would be permitted only to tunnel under the parks from well pads on private property nearby. But opponents have been denouncing the proposal at county-council meetings, while some county councilors have become concerned about the transparency of contract negotiations.

And Republican County Councilor Heather Heidelbaugh, for one, says she has never heard more opposition to a proposal before her. "There has been no other issue where I have received public [feedback] that is 98 percent against drilling in the parks," she said at a Nov. 6 county-council meeting.

Councilor Barbara Daly Danko, meanwhile, has proposed a three-year-hold on drilling beneath county parks, while the county conducts a "thorough examination of the risks and liabilities" of drilling.

"We're not asking for a moratorium on drilling," says Daly Danko. "We are going to be drilling at the airport and probably on other industrial sites owned by the county. Why don't we see how that goes before we begin drilling at our parks?"

The county was approached this summer by Huntley and Huntley, an engineering firm that consults with the drilling industry, about drilling beneath the park. The county issued its request for proposals in September. Fitzgerald won't release details about the number of proposals received or the companies involved. However, according to published reports quoting county-council members, the only proposal submitted came from Huntley and Huntley — which already has drilling rights on private land around the park — and its partner, energy company Range Resources.

Despite public opposition — which Fitzgerald ascribes to a "vocal minority" — the county executive says allowing drilling beneath Deer Lakes makes sense because drilling is already taking place nearby. Fitzgerald says Range Resources has leases on about 58,000 acres around the park, and that there are currently 19 active wells. Approving fracking under the park won't bring well pads any closer to its boundaries, he says.

"This process is happening anyway, regardless of whether we participate in it or not," Fitzgerald says. "Council can vote 15-0 against this. I can say no to this, but the fact is, it's going to happen anyway."

Fitzgerald also says that if the county does sign a lease, it can demand that the terms include provisions to ensure additional safety and environmental protections. And the revenue from drilling, he says, will benefit residents with "money that we can use to fix up and maintain our county parks."

Some opponents, though, worry that Fitzgerald is already undermining county council's ability to weigh in on the matter.

"My main issue here is the process and procedure that is being used," says County Councilor William Robinson. "I believe the administration is out of bounds and has gone outside their authority in pursuing this drilling idea on county parks." Fitzgerald, he says, should "let council play its rightful role."

County council must approve proposed uses for county land. Yet Robinson says he's been stymied in efforts to obtain proposed agreements with Huntley and Range. An informal request for documents was ignored, he says: He's awaiting a response to a follow-up Right-to-Know records request.

Fitzgerald maintains that council doesn't have a role in negotiating the deal. Under the terms of the original request for proposals, the executive's office has until Nov. 30 to work out terms with the driller. The contract would then be submitted for council's approval; if council doesn't act by year's end, the measure would have to be reintroduced in 2014.

"I also invited Councilor Robinson to a meeting where I gave some information about this to council and he decided not to come. But we want to get suggestions and feedback from council if they have any," says Fitzgerald.

Daly Danko's three-year hold on park drilling, meanwhile, has received no public feedback at all: The bill has been languishing in council's Government Reform Committee since she first proposed it in September, because Council President Charles Martoni, also the committee chair, has not brought it forward for debate.

Robinson says he worries that Fitzgerald's influence has been keeping the bill from coming forward for debate. "This council is made up of grown men and women capable of making their own decisions," Robinson says. "We must be given the information it needs to make an informed choice, and this process must be allowed to continue without interference."

For his part, Fitzgerald acknowledges that "It's no secret that I don't support that bill." But Martoni says Fitzgerald has not "applied any pressure whatsoever" regarding Daly Danko's legislation. Martoni says he plans to bring the measure forward for discussion after he attends a Nov. 25-26 symposium on shale gas being held at Duquesne University.

"I just want to get the facts," Martoni says. "If we drill under the parks from outside, what harm will it do? I don't know. Some say it won't cause any, and some say it will."

If the bill is not given a committee hearing within 60 days, Robinson says procedural maneuvers can pull the bill out of the committee and bring it before the full council for discussion.

That deadline has not passed, and Daly Danko says she is still hopeful that her measure will be brought up for discussion through the typical process.

"I think there are people who are in favor of drilling generally, but are still against the idea about drilling on or near our parks," Daly Danko says. If drilling beneath parks were put on a ballot before voters, she predicts, "it would overwhelmingly fail."

"It doesn't ban fracking: It simply says, ‘Let's hold on for three years when it comes to county parks,'" Packer continues. "I believe in three years we are going to see that fracking is a much more dangerous endeavor than [drilling advocates] want to believe."

Packer says that as long as a drilling proposal is before county councilors, they can expect to hear from concerned citizens. And the citizens signing on to this battle, he says, aren't just the usual anti-fracking protesters like himself.

"When the county decided to drill in county parks, they hit a raw nerve with people," Packer says. "It's like drilling in their backyards. ... And at the end of the day, people like Kathryn Strang and her family speaking up are the ones who will ultimately make the difference in this fight."