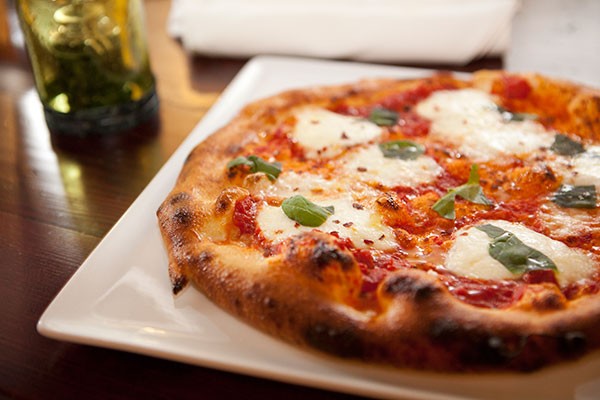 Nowadays, not many adults spend their leisure time painting bucolic scenes of sailing ships and deer in the woodlands, so "paint by numbers" has been relegated to child's play. But with some decent brush work, perfectly attractive — albeit formulaic — paintings could be made from numbered canvases.

So it is with restaurants. True originality is sublime, but rare, with most restaurateurs clearly working within a set vocabulary of tastes and trends. But while cooking by numbers may not yield a truly transcendent dining experience, it certainly doesn't preclude a satisfying meal.

Which brings us to Proper Brick Oven and Tap House in the heart of the Cultural District. In the Pittsburgh tradition, we feel compelled to add that it's in the space occupied for decades by one of the many Tambellini restaurants, but as we never went there, we walked in without any baggage related to its past.

Proper's interior doesn't suggest much past at all, aside from the exposed brick walls that have become architectural shorthand for "cool, reused old building." Beyond that, the decor aims for that middle ground between cozy and classy. Most of the seating is at a long, upholstered banquette facing the bar, above which 30 beers on tap are listed in chalk on individual boards. A fire flickers in the mouth of the brick oven, and a collage of stained wooden panels from wine crates serves both as wall art and wine list. In short, whether it's before a show or a ballgame, whether you're meeting friends or colleagues, Proper is a — yes — proper choice.

The brief menu of snacks, pizzas and pastas breaks no new ground, but strives to be about as refined as that workmanlike trinity can be. Goat cheese and mozzarella are housemade, pasta is housemade or else sourced from local artisan maker Fede. Even the potato chips (with sea salt and fresh chives) are housemade. Other starters are closer to true tapas or antipasti than to pub grub.

And while the offerings are up-to-date, the only really trendy move is "bacon candy," an item we viewed with some skepticism; the American habit of sweetening things that ought to be savory and/or salty tends to dull, even dumb down, the palate. But we were happily surprised with Proper's version. Instead of being masked by sweetness, the thick bacon slices' native smokiness was intensified by their contact with maple syrup, and their chewiness made this snack satisfying without working our jaws too long.

Fried chickpeas tossed with sea salt and smoked paprika were a simpler, more classic nibble. Like wasabi peas without the sinus-cleansing potency, they were crispy, light and addictive.

As you'd hope, the brick oven turned out suitably tasty pizzas. High-quality ingredients played their part, too. The Bianca featured house-made ricotta, burrata (a fresh Italian cheese made with mozzarella and cream) and Parmigiano-Reggiano. Without sauce to temper the oven's heat, the thin crust scorched a bit, but the flavors, highlighted by roasted-garlic chili flakes and extra-virgin olive oil, had more depth than a typical white pizza.

The Carnivore, with four forms of meat — sweet and hot Italian sausage, bacon and pepperoni — was aptly named. The pie was almost overwhelmed by cured meat. The crumbled sausages formed an a thick layer that obscured the (housemade mozzarella) cheese, but the bacon really shone, its sweet smokiness bringing high and low notes while its chewier texture added variety to the bite. Meanwhile, where the cheese peeked through, it was rich and creamy, and the puffy edges of the crust were lusciously chewy.

Linguine with white clam sauce (vongole) came in a reasonable, rather than gut-busting, portion, and the al dente noodles were thoroughly coated with a slightly thick, flavorful sauce studded with juicy clams, including a suitable handful served in the shell. Jason's only quibble was that the sauce could have been a touch brighter, but the absence of oiliness avoided a common pitfall of this dish.

A special pasta, seasonal butternut-squash ravioli, was dominated by lots of thick cream sauce, whose sweetness tipped the balance between the dish's other, earthy and salty flavors. We would have preferred just enough of this sauce to cling to the ravioli. But we loved the ravioli's tenderness, and the fact that the squash inside had not been pureed to the consistency of baby food, but retained some texture of the gourd from whence it came.

Comfortable, casual, affordable and thoughtful, Proper is the kind of place that would be right at home on Murray Avenue or Butler Street. Now that Downtown is emerging as a neighborhood, too, Proper is a welcome addition to the broad, but underserved, need for dining spots between deli and haute cuisine.