This production of a Pulitzer-winner adds up 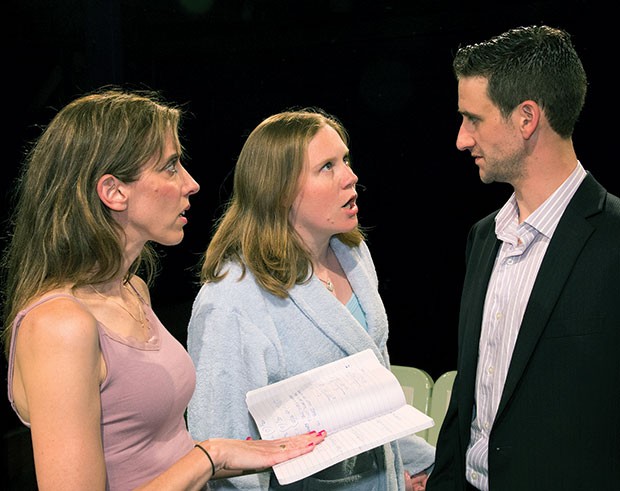 Rest assured, you don’t need to know serious math. It does help to realize that academics in general and scientists in particular tend to be wound a turn-and-a-half too tight. That describes three-quarters of the four-character cast.

Proof moves back and forth through time, and in the imagination, to tell the story of the differing daughters of a math genius, and his former grad student. Robert (a towering James Critchfield) was a giant and a revolutionary in several branches of mathematics. He was famous before his mid-20s, but succumbed to (an unidentified) mental illness for most of what should have been his remaining career, leaving him to his daughters’ care.

At the center of the vortex is Catherine (Jena Oberg, convincingly fragile), the younger daughter who abandoned her own studies to remain in the dilapidated family home and take personal charge. She is the daughter of whom Robert is “proud,” for her math talents as well as her devotion. She has inherited at least some of his genius; will she also face his instability? That’s her greatest fear among many others.

Elder daughter Claire (Mary Meyer acting the perfect priss) is merely deemed “satisfactory,” even though she has provided vital financial support. No surprise that she’s the outsider, and doesn’t visit often. Completing the quartet and providing a romantic interest — and much conflict — for Catherine is Hal (a suave Jared Pfennigwerth, doubling as technical director), now a teacher himself at the University of Chicago.

In the aftermath of Robert’s death, Hal studies the former’s voluminous notes looking for some remaining shred of genius. What he finds, how he reacts, and the resolution of the characters’ conundrums — well, that’s what Proof is really about.

Director Art DeConciliis paces the humor-studded drama with sensitivity. There are some rough spots, but the staging works and the production succeeds in striking a few nerves. Have fun.

This Streetcar does right by Blanche DuBois

The Crucible at Little Lake Theater

A Masterpiece of Comic … Timing at Little Lake Theatre