"You can't say certain groups can hold events and not others." 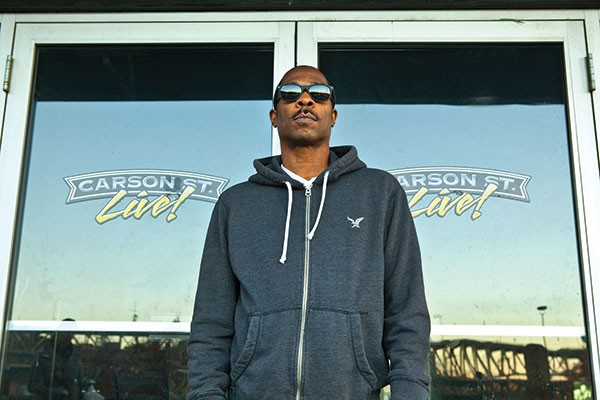 How much time has gone by since event promoter William Marshall filed a complaint alleging discrimination at Station Square? So much time that two of the bars named in his February 2012 grievance have since closed their doors. But Marshall's case against them, along with another Station Square venue and the complex's managers, lives on.

At issue is a Station Square policy enforced in late 2011, in the wake of high-profile altercations between club-goers. The facility's owners, Forest City Enterprises, feared "pandemonium," and reminded tenants of their right to approve special events in advance.

But Marshall says the policy has enabled discrimination against black promoters and black crowds. And nearly two years ago, he filed a complaint with the city's Commission on Human Relations — which adjudicates complaints of discrimination in housing, employment and public accommodations.

Forest City denies that race has played any part in its actions. The bars, meanwhile, say that parting ways with Marshall was strictly a business decision. The CHR can order Station Square to change its policies, but so far it hasn't decided whether there's enough evidence to even hold a hearing.

The agency has been subpoenaing records, explains Charles Morrison, the CHR's executive director, but "[s]ometimes there are questions that can't be answered."

Marshall began promoting events — such as after-parties for hip-hop concerts and Steelers games — at Station Square in 2008, at the now-shuttered Margarita Mamas. Later, he says, he moved to Matrix and Carson Street Live, which have also both since closed.

Marshall says his own fortunes at Station Square changed in the fall of 2011, when a large-scale fistfight in September was followed by an Oct. 22 shooting at Zen Social Club during an event hosted by WAMO, a hip-hop radio station.

Marshall contends that, while neither of those incidents involved events he promoted, "The people that own Station Square sent letters to all the clubs saying ... ‘We don't want all this stuff going on, all these blacks coming down here.'"

Forest City would not respond directly to questions about Marshall's complaint, but it did provide copies of two letters it sent to tenants at the time. Neither letter mentions race.

"Recent incidents ... have resulted in uncontrollable crowds and pandemonium in the Station Square Project, which were injurious to the reputation" of the complex, the Sept. 14, 2011, letter said. "Furthermore, said incidents were a nuisance and annoyance to other tenants."

"Landlord has approval rights over all scheduled events at the premises," the letter continued, instructing tenants that they "must take immediate steps to inform [Forest City] in writing of all scheduled events, and obtain landlord's approval." A later letter, sent days after the shooting, repeated the demand.

Forest City also furnished a Nov. 25, 2013, letter that its attorney, Patricia Monahan, sent to the CHR. "[T]he landlord has addressed the fact that some of its clubs held events that resulted in ‘uncontrollable crowds and pandemonium' as it had a right to do," the letter said. "None of these communications have ever addressed Mr. Marshall or any particular tenant or patron's race." In fact, Monahan's letter contends, "[n]one of [Forest City's] business practices have ever addressed anyone's race."

"They don't have to say the word ‘African-American,'" Marshall counters. "But they stopped the African-American events and they continued to let white guys do their events."

Among the targets of his complaint: dance club Whim.

Lonnie Syke, who partners with Marshall on some events, says, "After that shooting, [Whim] shut everything down and said they were doing Top 40."

Whim owner Chad Hardy says he doesn't work with Marshall because "[m]y opinion of him as a promoter is very poor." He notes that Whim currently works with a black promoter, Robert Sledge, and says the venue "hold[s] multiple black events on a monthly basis."

Marshall also contends that BarRoom Pittsburgh turned him away in an Oct. 12, 2011, email from executive Mark Mendelson, of parent company SR Station Square. Marshall furnished City Paper with a copy of the email he says Mendelson sent: "The landlord will not let us run contract events due to lease restrictions," it reads. "We're sorry we can't continue the events."

Donald Saxton, the attorney representing SR Station Square, acknowledges that Forest City had to approve events. But he says his clients chose not to work with Marshall because he didn't bring in enough revenue.

"They needed some assurance from him that they weren't going to lose money," Saxton says.

BarRoom Pittsburgh was padlocked this past September for owing back rent, along with its Western-themed sister club, Saddle Ridge. The latter club, meanwhile, is named in a complaint filed by a black promoter, Rayco Saunders, who says the club canceled a fight he'd scheduled for Nov. 17, 2011.

Saunders had scheduled the event with "a party who did not have authority," says Saxton. Saddle Ridge decided to cancel boxing events after a fight broke out among audience members at an earlier bout, Saxton says. In any case, he says, "This is a country bar. People don't go down to Saddle Ridge to see boxing."

That explanation dovetails with what Saunders says he was told at the time. But, he counters, "I'd been to boxing matches there already": Jimmy Cvetic, a white former Allegheny County Police Officer (and occasional City Paper contributor) held two events at Saddle Ridge earlier in 2011. A third event had been slated for April 2012, but it was moved.

The promoters think that move was prompted by the filing of their complaint earlier that year. Similarly, they contend that Whim only began hosting hip-hop events again in June 2012. Hardy says that's because his promoter at the time was doing Sunday events only on the nights before Monday holidays, and that there were no such holidays for several months. Sledge now does events on Fridays and Saturdays. But the promoters have their doubts.

"When our complaint came out and ... the pot was getting hot," says Syke, "that's when they started doing black events again."

Experts say such allegations can be hard to prove.

"Very often in discrimination it is a he-said, she-said issue," says Shannon Powers, spokesperson for the state's Human Relations Commission, which also looks into discrimination complaints. "What we're looking for from both sides is, ‘What information do you have to prove your case?'"

A policy can be discriminatory even if it never mentions race explicitly, she adds.

"You can't say certain groups can hold events and not others," Powers adds. "If they're turning down everything with hip-hop music, it's like an employer who says no cornrows or no Afros. They're basing that on the fact a hairstyle is mostly worn by African Americans."

Morrison, of the city's CHR, says he can't comment on the Station Square complaints. But claims like Marshall's, he says, could fall under the heading of "adverse impact" or "disparate treatment." Adverse-impact cases, he says, "generally involve a policy or practice that has been shown to adversely impact people based on their protected class ... things such as height/weight requirements that are shown to be non-job-related and adversely impact women as a group."

That's not to say country bars have to host hip-hop shows. But a policy might be deemed to have an adverse impact if it approved only events that featured country or Top 40 music.

Such a finding would depend on a commission investigator determining whether there is probable cause that a complaint is valid. If so, the commission brings the parties together to negotiate in private. If that fails, a public hearing is held.

If the allegations are upheld, "The remedies ... include a cease-and-desist order — you must stop discriminating on race, so you must accept contracts regardless of race," Powers says. But while a remedy "can also cover-out-of-pocket expenses" for a complainant, "we can't order giant pain-and-suffering settlements."

However, such an outcome is rare: The CHR receives roughly 120 complaints a year, but only 20 percent of those are upheld.

And for now, the CHR is still investigating the Station Square case to see whether a hearing is warranted. "These cases should be concluded in the near future," Morrison promises.