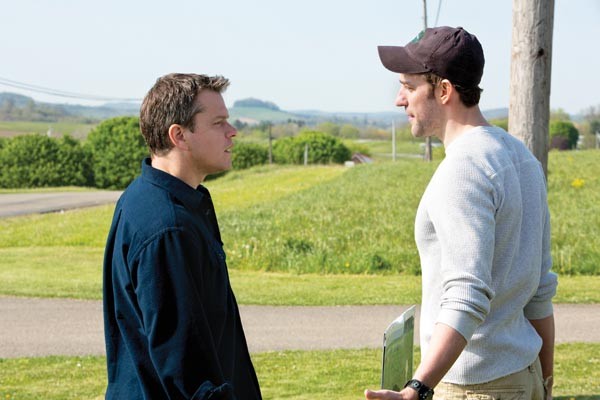 Trouble in a promised land: Matt Damon and John Krasinski

Promised Land opens with a symbolic image — a close-up of its protagonist, Steve Butler, cleansing his face with water. But Steve (Matt Damon) is about to get dirty before he gets clean. Steve is a land man for a huge energy company, and he and his partner Sue (Frances McDormand) are headed to rural Pennsylvania to secure leasing deals for Marcellus Shale drilling. (Though it occurs in an unidentified part of Pennsylvania, the film was shot just north of Pittsburgh.)

Once there, the pair dons flannel shirts and Carhartt coats, and have good luck signing up struggling farmers. There's a grumbly school teacher (Hal Holbrook) who has been reading up on fracking problems ("The way we go about getting [the gas] is dirty business"), but most locals are eager to take the promised payout. Steve fudges the exact numbers, speaking vaguely of "millions," while Sue works mother-to-mother, sketching futures that include college opportunities for the town's children.

But securing the leases gets complicated when a charismatic environmental activist named Dustin (John Krasinski) arrives in town. He passes out flyers depicting agricultural damage caused by fracking, and sets a toy farm on fire for amazed school kids. He's energetic and passionate about his opposition to fracking: "This is not an environmental conspiracy — this is our lives."

Promised Land is directed by Gus Van Sant, and was adapted for the screen by Damon and Krasinski from a Dave Eggers story. The film is specific about the shale-gas boom, and its controversial economic, environmental and social aspects. (The fracking issue may be visceral for Western Pennsylvanians, but for other viewers, it's likely to just be this year's villain in another poison-versus-profits drama.)

So, despite its timely trappings, Promised Land is less a muckraking piece than a character study, as Steve is forced to weigh what his obligations are, and to balance what benefits him with what impacts others. As does, to a less-explored degree, every other character — from farmer and town official to adversaries Sue and Dustin. In that regard, Promised Land is a fine, well-modulated drama.

However, due to certain plot developments, it's difficult to discuss the film's presentation of the much-debated fracking issues. Generally speaking, the film comes down negatively on the industry and its practices, without being preachy. But I'm not sure that either the pro or con folks will be entirely happy with the final disposition. Perhaps it will offer plenty to talk about after the film, so that's an added value on the ticket price.