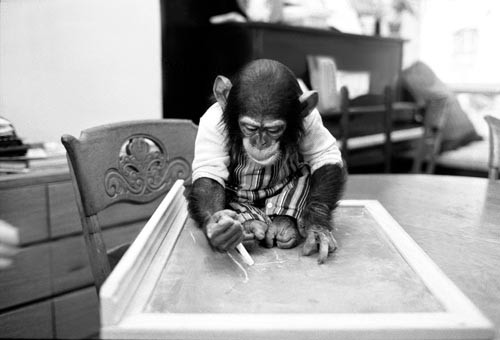 Portrait of the artist as a young chimp: Nim, at home in New York City

You can go to Rise of the Planet of the Apes and cheer when the chimps achieve self-knowledge and overthrow their human caretakers: That's fantasy fun. Or, you can watch James Marsh's documentary Project Nim and see what happens when a chimp is raised among humans to be more like us: It's a real-life scientific farce that doesn't end as well.

Nim was a chimpanzee born at a research center in 1973, and taken from his mother at two weeks to become part of an experiment conducted by Herbert Terrace, of New York's Columbia University. If our closest genetic relative was raised among humans and taught sign language, could a chimp really communicate with us?

Little Nim Chimpsky (named for linguist Noam Chomsky) was placed first with a sprawling family of academics on the Upper West Side. They had no experience in primate care, didn't know sign language and favored laissez-faire child-rearing. There, Nim ruled as an indulged child, controlling the household, wearing groovy threads and smoking pot. ("It was the 1970s," sighs a family member today.)

When Nim grew too rambunctious, he was re-located to a Columbia-owned country estate, where his care and language training were overseen by (mostly) female students, and were the focus of frequent media attention. But increasingly, Nim and the grand language experiment both went off the rails: The chimp's cute mischievousness turned unmanageable, and finally dangerous, while the study's lack of structure compromised its integrity. Thus, Nim, like other child stars, fell unceremoniously from grace.

You may chuckle at some of the idiocy on display -- hippie students rapping with Nim over yogurt, or the turtleneck-wearing, combed-over, BMW-driving professor Terrace, who is the epitome of the swinging middle-aged guy from the 1970s. But beneath it all runs tragedy fueled by hubris.

Ultimately, the best Nim could offer toward bridging the gap between man and ape was to be a mirror. In it, his handlers celebrated the species' shared playfulness and affection, while choosing to ignore in themselves Nim's less-noble traits: self-centeredness, neediness, aggression and disregard.

In the long run, Nim never had a chance: By the time folks figured out he couldn't, in fact, express what he was thinking, Nim was already locked into the human world where there was no escape to his own reality -- living in the wild forest with a bunch of other chimps. Project Nim turned out to be a cruel, pointless experiment, the clearest result of which is: Humans can be pretty dumb.