Progressive voters and candidates call for election reform ahead of November

Pennsylvania will elect a new governor this November, and most voters will be deciding between Democratic nominee Josh Shapiro and Republican Doug Mastriano. But some groups want people to know their choices are not limited to major party frontrunners.

Progressive voters and candidates who believe the Democratic Party is failing them say they are left choosing between joining a third party or changing the Democratic culture from the inside. One thing they have in common is a belief that some type of reform needs to take place in local and national government. Recent polling from New York Times/Siena College suggests they’re in good company, with 58% of Americans indicating their country needs major reforms or a complete overhaul.

In 2019, Bethany Hallam ran for Allegheny County Council as a progressive candidate challenging the Democratic mainstream. She says her goal has been to change the system from within.

“There are so many factions within the two-party system, and we have so many third-party systems," says Hallam. “I’m a Democrat because that’s the party I affiliate with the most, but all Democrats are not the same.” 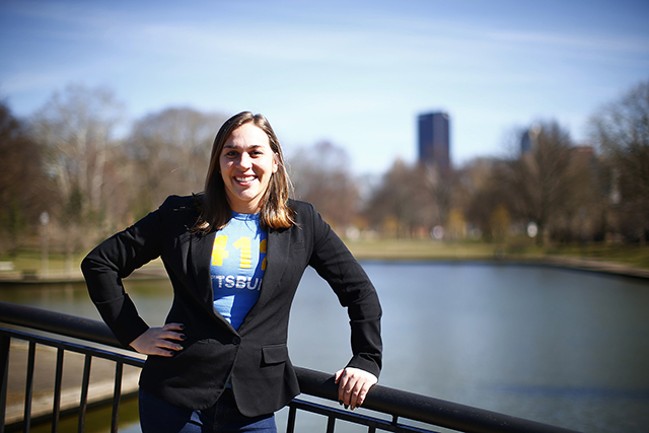 Those seeking office through third-party platforms say many Americans feel increasingly let down by their representatives in both federal and local governments.

“Roe v. Wade was a disappointing moment for a lot of Americans,” says Christina “PK” Digiulio, the Green Party candidate for Pennsylvania Governor. “Gun control is something that most people agree upon, yet not enough has been done on the matter. People feel that there are only two options and that they must vote for the one who’s going to do the least damage."

She is aware of her slim chances but says winning office is not her only goal.

“The third party itself has been discriminated against; to most, we look like a joke,” Digiulio says. “We didn’t run with the thought that we are going to win. We ran to start to be a part of the conversation.”

Digiulio’s running mate for lieutenant governor, Michael Bagdes-Canning, is a former Democrat and current Mayor of Cherry Valley Borough in Butler County. He says his party can attract disenfranchised voters from the other end of the political spectrum.

“I have been a Democrat for 42 years and I never voted for anyone that I was excited about,” says Bagdes-Canning. “I won my election in the middle of Trump Country. My values are different from his, but I managed to win the election because I listen to what people want. Sometimes people are afraid because they don’t know so they tend to gravitate to what they do know but people are getting tired of the empty promises, and we are starting to see a shift.”

According to Stephine Pavlick, a member of the Party for Socialism and Liberation, political campaigns and the voting process have been reduced to a fight for “money and popularity.”


“Politicians know what the people want, and to get elected, they say what the people want to hear. However, that does not mean that what they say is going to happen,” says Stephine Pavlick. “It’s hard to get a good stance on what local officials are backing. That’s why most of their statements tend to be vague.”

Morgan Overton works in the Office of Management and Budget department for Pittsburgh Mayor Ed Gainey's Administration. She is also the first-ever vice-chair woman for the Allegheny County Democratic Committee, and the president of the Young Democrats of Allegheny County. Overton says she is an advocate for gender, racial, and economic justice, and, like Hallam and other officials, is working with others to shift politics in Allegheny County.

“We must take money out of politics. They are practically married," says Overton. “Politics, in general, don’t look like working-class people. We must remind ourselves that everyone should have a seat at the table.”

Overton says the funds politicians often receive from large organizations can prevent them from standing up for the interests of their constituents.

"We must remind ourselves that everyone should have a seat at the table.”

Pavlick says that this applies most accutely in Pennsylvania’s health care industry, where a handful of hospital systems dominate the market.

“Many people don’t have health care and need health care,” says Pavlick. “Democrats and Republicans are both taking money from UPMC. They take the money, which means they can’t challenge what UPMC’s doing.”

Hallam says political candidates often inflict harm during their campaigns by stoking up division instead of offering solutions.

“Political candidates are campaigning on fear and helplessness instead of helping people," she says. "They will talk bad about their opponent, but they won’t mention what they will do for the community they are about to serve."

Banning corporate funding from political campaigns and implementing rank-choice voting have been suggested by officials like Digiulio and Hallam as potential solutions to voter disenfranchisement.

Rank Choice voting is a system where voters rank candidates by preference on their ballots. While the traditional ballot selects the candidate with the most votes, rank choice voting accounts for people’s second or third choices in races with multiple contestants.


Some, including Overton, say it could help elect a greater diversity of political candidates.

“Rank choice voting is something that has been brought up a lot recently,” says Overton. “I believe that if we have rank choice voting, it allows Americans to hear more voices and allows people to make the best choice for them.”

A handful of states and municipalities employ some form of rank choice voting, with many, including New York City and the state of Alaska, adopting these processes within the last few years.

According to an article published in Fairvote, rank-choice voting led to more diverse candidates taking office in New York since its adoption. Thirty-five candidates of color won the Democratic primaries in 2021. In addition, 73% of all candidates were people of color and 43% were women or nonbinary.

People like Alicia Salvadeo, a member of Pittsburgh’s Socialist Alternative branch, say today’s youth will play a huge part in the change that’s about to come.


“I am also a teacher, and I asked my students when they turn 18, are they going to vote and most of them said no. That does not mean they are disengaged,” says Salvadeo. “I think that candidates are worried about young people. A lot of young people have been protesting and fighting for issues in America.”

According to a youth poll by Harvard Kennedy School, 56% of Americans between the ages of 18-29 believe that “politics today are no longer able to meet the challenges our country is facing.” Another poll by Tisch College found that in 2020, 27% of young adults attended a political march, 29% contributed money to a campaign, and 18% volunteered for a political campaign.

“I’m a Democrat because that’s the party I affiliate with the most, but all Democrats are not the same.”

While youth political engagement has increased every year since 2016, the approval ratings for both major parties have fallen during that timespan. Overton says these concurring shifts are energizing young voters.

“People’s immediate reaction to youth is that they are disengaged in politics, but that’s not the case," she says. "Our youth are the ones starting to organize and showing us how things should be run."

Age limits on national office seats like in Congress (25 and up) or the presidency (35 and up) prevent young adults from changing the political system from the inside.

In addition to these legal barriers, those in office at the federal level tend to be senior in years. According to the Library of Congress, the average age of members of the House at the beginning of the 116th Congress was 57.6 years. The average for Senators was 62.9 years.

“We have seen officials who have been in office for a very long time, and they do not want to give that up," says Overton.

Local progressives say their movement is about bringing more voices into the political landscape. They say real change starts at the local level.

“You can make your mark in different ways in Pittsburgh. You do not have to be on the national level or a former politician to make a change. You can join the city council or run for mayor in your neighborhood,” says Overton. “If everyone is making changes in their own neighborhoods, then that’s when change comes nationally.”