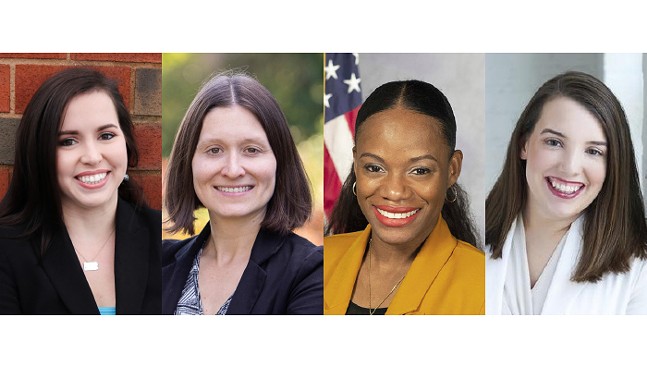 Though results are still unofficial, State Rep. Summer Lee (D-Swissvale) has declared victory in her race to hold onto her 34th state House District seat, beating out challenger Chris Roland with around 75% of the votes. Roland came into the race promising a comparatively moderate platform, particularly in regards to fracking (Roland was backed by pro-fracking groups and politicians, while Lee is an outspoken critic of the industry).

Lee, who was first elected in 2018 with backing from many local progressive groups, is the first Black woman from southwestern Pennsylvania to hold a seat in the state legislature. Since then she has started UNITE PAC, a group that supports other progressive candidates, particular women, LGBTQ people, and candidates of color.

Jessica Benham will likely represent Pennsylvania's 36th State House District, after her victory in a four-way race on Tuesday. The 36th District is reliably Democratic, and Benham will have a Republican opponent come November. Benham received overwhelming support from politicians, unions, and organizations like Planned Parenthood, and came out ahead in a race marked by controversy because of one of her opponents, Heather Kass, came under scrutiny after pro-Trump posts surfaced on her Facebook page. The longtime incumbent state Rep. Harry Readshaw (D-Carrick) is retiring at the end of this term.

Another progressive victory, and maybe the most surprising, came in the form of criminal defense attorney Emily Kinkead. She beat out incumbent state Rep. Adam Ravenstahl (D-Ross), and will takeover Pennsylvania’s 20th State House District.

Though Kinkead and Ravenstahl agreed on some platforms, including support for unions and the $15 minimum wage increase, they were somewhat split on issues like fracking and immigration. Ravenstahl voted in favor of a hefty incentive package for the Shell Cracker Plant in Beaver County and for HB 1100, a bill providing large tax breaks to petrochemical companies, the latter of which Kinkead opposed.

Kinkead also opposed policies that would target immigrant workers, including the Pennsylvania's e-verify rule for construction workers, a law requiring construction firms to verify Social Security numbers of employees. Immigrant advocates and labor unions like USW and SEIU say this law will unfairly target immigrant workers. Ravenstahl voted in favor of this bill, which became law.

Finally, former public school teacher Lissa Geiger Shulman will compete for the currently Republican held Pennsylvania’s 30th State House District after defeating Marco Attisano, a former campaign treasurer for Conor Lamb (D-Mt. Lebanon). Geiger Shulman, who was backed by a variety of progressive leaders and groups, decried tax subsidies being given out to fracking and petrochemical companies and lauded the benefits of moving to a universal health-care system. She will face off against incumbent State Rep. Lori Mizgorski (R-Shaler) in the fall.

Also, Sara Innamorato (D-Lawrenceville), another progressive female candidate who rode to victory along with Lee in 2018, will keep her 21st District seat. She ran unopposed, as did Michele Knoll (D-Ohio Township), who will take on state Rep. Valerie Gaydos (R-Aleppo) in the 44th state House District.

Women for the Future (WTF), a group that provides financial backing and guidance to female candidates in Western Pennsylvania, endorsed the nine winning candidates this cycle. These also include state Sen. Pam Iovino (D-Mt. Lebanon), candidate Sharon Guidi (running in state House District 40), and candidate Emily Skopov (running in state House District 28). In a press release, WTF celebrated the sweep, calling it a disruption to what it views as failing leadership by the Allegheny County Democratic Committee (ACDC), who saw four of its endorsed candidates lose this primary election. (Overall, the majority of the ACDC endorsed candidates won their elections, though most of the endorsed candidates won in uncontested elections.)

The ACDC upset many area Democrats this year after it passed over the incumbent Lee in favor of Roland, and endorsed Kass over Benham, despite Kass' clear support of Trump. Critics found the move was especially concerning after the ACDC defended Trump supporters in its ranks.

Because of this, the Pennsylvania Democratic Party released a strong rebuke of the committee's Kass endorsement. Many prominent states leaders, including state Sens. Lindsey Williams (D-West View) and Wayne Fontana (D-Brookline), as well as Pittsburgh Mayor Bill Peduto, suggested that the ACDC halt giving endorsements altogether.

WTF stated, “While the Allegheny County Democratic Committee (ACDC) continues to rebuff the candidacy of strong progressive women in Southwestern Pennsylvania, WTF continues to step up to support these bold and thoughtful candidates.” It went to say that WTF looks forward to “supporting these candidates and more in the Fall General Election.”