Please don’t break down the walls of Jergel’s 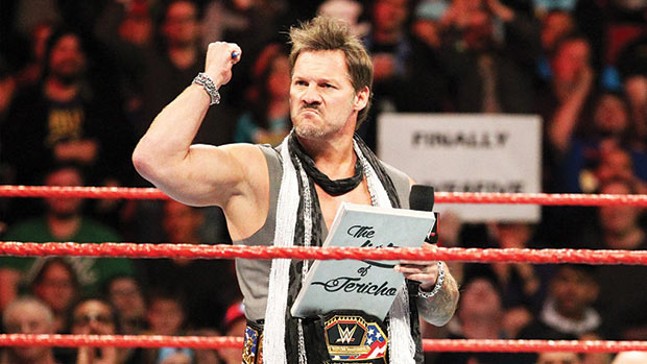 Photo courtesy of WWE.com
Chris Jericho putting a whole city on his list

They don’t call professional wrestler Chris Jericho the “Ayatolla of Rock ’n’ Rolla” for no reason. When he’s not performing in five-star matches in New Japan Pro Wrestling, locking in mad “Walls of Jericho” (his signature submission move) or putting “stupid idiots” on his infamous hit list (“The List of Jericho”) for the WWE, the charismatic musician performs with his heavy-metal band Fozzy. The band used to make 1980s-leaning metal, but it currently writes music that leans into a hard-rock sound, with gritty vocals provided by Jericho. It’s the kind of music designed for alternative-radio airplay.

Fozzy formed in 1999, and Jericho joined permanently in 2000. Initially, he performed under the stage persona of Mongoose McQueen, and he refused to acknowledge that McQueen and Jericho were the same, no matter how hard reporters pried. McQueen pretended not to know who Jericho was, and Jericho expressed his love for the band Fozzy. But that kind of kayfabe can be a nuisance, so Jericho dropped the McQueen persona in 2005. The band has since embraced the crossover potential as fans of the legendary wrestler are as likely to support Fozzy as fans of heavy metal.

Photo courtesy of the artist
A different kind of stage

And it’s not like Jericho has a problem with those two worlds meshing. Although he didn’t wrestle at NXT Takeover: Chicago last May, Fozzy’s titular single “Judas,” off its October 17 release, was the featured song of the event.

The connection between the wrestling and music world is closer than most would think, and with many commonalities. Much like professional musicians, wrestlers travel from town to town, all over the world, performing for a new crowd every night in venues big and small; both sets of performers put all their energy and talents into emotionally connecting with the audience, or at least giving them one hell of a show.

And Jericho’s invested in cross-pollinating the two scenes. Let this performance at Jergel’s be a warm-up for his Rock ’n’ Wrestling Rager at Sea in October, a cruise that will showcase bands Fozzy, Shoot to Thrill, Cherry Bombs, as well as wrestlers from Ring of Honor, New Japan Pro Wrestling and legends of WWE’s past.