I Want Your Halloweenie 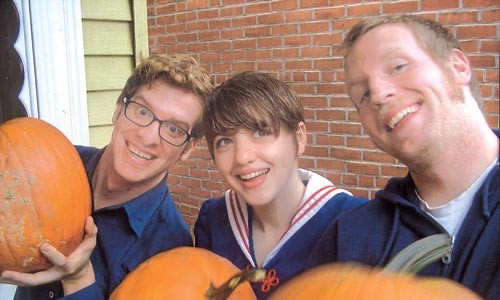 It takes a certain gallows humor to assemble a compilation of local bands celebrating Halloween in all its death, decay and debauchery. But to do so faithfully each year? That requires the shared goofy ghoulishness of Sandy Patton and brothers Jonathan and Jason Dowling.

"Production Procedures Productions" is a hefty handle for these three friends who share a Bloomfield house, play in bands, and crank out an annual Halloween compilation. This year's Brains Are Served is the fourth by PPP.

"Most compilations are just sorta scattered," says Jonathan Dowling, of the Halloween theme. "There's no theme, it's just a big chunk of bands put together on one CD. And even if at times [our compilations] sound like that, I don't want it to seem like that. We all love Halloween," he explains. "And it gives us a nice deadline."

The Dowling brothers, originally from Uniontown, began recording Pittsburgh-area bands like Marvin Dioxide in 2000, before following their sister -- and the lure of graphic-design jobs -- to Seattle. "Whenever my brother and I moved out to Seattle, our friends just sort of scattered all over the place," says Dowling. "And we always thought they were pretty creative people, with some good music ... I just wanted to bring that all together, keep people in contact." They released their first compilation in 2003, while both still lived in the Northwest.

Even so, that interaction with friends did little to stave off the homesickness. "After a while I just wanted to move back to the city and start a rock band," Dowling says, with a wry chuckle. And that move has entailed some sacrifices: Jonathan now works in a bakery, while Jason works at The Warhol Museum -- not exactly the design work they went to school for. "As far as doing exactly what we wanna do, I'd say not," Dowling muses.

Enter Sandy Patton, who met Jonathan while playing together in local band El Grosso. Her interest invigorated efforts to get the 2004 compilation out the door. "She got really into it, as well as I did, and it just seemed to work out a lot better," explains Dowling. "She was a lot better at promoting us and talking to bands and all that good stuff."

Before moving to the 'Burgh three years ago, Patton cut her teeth on the music scene in Memphis, Tenn., playing in an (unsurprisingly quite popular) band called Wet Labia. Now all three perform as Wallace's Fallen Obelisk Kid (El Grosso broke up earlier this year). The group's track on this year's compilation, "Nymphs," is a comedy-horror sea chantey, all creepy accordion, gang vocals and sea monsters.

In all, Brains Are Served features 26 songs, mainly exclusive tracks from Pittsburgh acts. The material ranges from the haunting (Styles For Modern Living's "What I'm Really Afraid Of") to the hellish (Milk Milk Lemonade's "Me Mom's Da Grim Reaper") to the just plain awesome (Magic Wolf's cock-rockin' "Count Rockula").

Common to much of it, though, is a tendency toward the scatological and carnivalesque. Regrafsivart's "Toilet Monster" and Dookie Hauser Emcee's aptly-titled "Asseater" dare you to listen with a straight face, while The Maxipads' "(I Want Your) Halloweenie" contains the shouted lines, "I just wanna get it on / I wanna suck on your candy corn."

"We were listening to the songs from The Maxipads and Weird Paul just laughing our asses off," says Dowling. "'I Want Your Halloweenie' -- we were actually gonna call the comp that for a minute," he says, laughing.

Though it's only distributed informally, this weekend you'll have plenty of chances to pick up the CD -- and laugh your own ass off -- at the four consecutive release shows in area venues featuring the cream of the comp's crop. Thanks to the Patton and the Dowlings -- and 27 weird and wacky bands -- this Halloween, rock is served.