In an era when expressions of activism are often done through social media, having shareable images, particularly eye-catching ones, is key 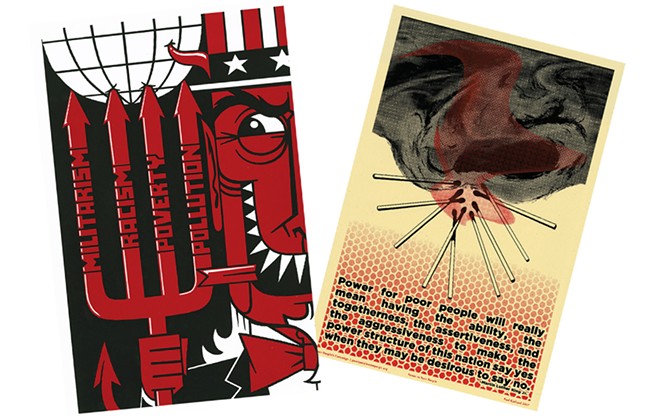 “Four Evils” by Eric J. Garcia and “Power to Poor People” by Paul Kjelland
A piece from the work for Poor People’s Campaign

In 1967, the year before he was assassinated, Martin Luther King Jr. began organizing an economic justice movement against American poverty called the Poor People’s Campaign (PPC). In 2017, the movement was revived under a campaign of the same name with goals of dismantling systemic racism, inter-generational poverty, environmental issues, and other intersecting topics.

The new PPC put out a call for art representing the values of the campaign; international printmaking collective Justseeds responded. This collective is spread across North America, but its distribution center is based in Pittsburgh.

The pieces will be on display in the exhibit Learn as We Lead, Walk as We Talk, Teach as We Fight at Bloomfield studio Pullproof, beginning with an opening reception on September 7. The pieces cover social issues ranging from homelessness to clean water access to the right to health care. Local Justseeds members Shaun Slifer and Mary Tremonte also selected other works from the collective covering related topics.

All of the pieces in Teach as We Fight are available in free, high-res PDF downloads. Many (though not all) other projects made by Justseeds are also available for free download, which is fitting with the social justice messages portrayed in the art. There's always a dissonance when art about equality is not accessible to everyone.

In an era when activism is often expressed through social media, having shareable images, particularly eye-catching ones, is key. "When the standing rock occupation was going on, we were pulling in a lot of graphics from outside artists and posting things that people can download. Some of those images, we provide them in high-res so people can reprint them on paper," says Slifer.

There's not a lot of money in activism-centered art, but for a project like PPC — with "poor" in its name — it would be a disservice to not make the materials available to those whose issues it represents.

"I would characterize it as service design. We're not getting paid like a professional graphic designer would get paid," says Slifer.

PPC gave Justseeds certain phrases and messages it wanted in the art, and the collective went from there. Some pieces take the tone of a political cartoon, such as "Four Evils" by Eric J. Garcia, which depicts the devil in an Uncle Sam hat, holding a pitchfork whose prongs represent different social injustices. Others, including "Power to Poor People" by Paul Kjelland, directly quote King on the issue of poverty.

Justseeds is now in its 11th year as a collective and has grown from 16 members to 29, and it’s grown in diversity. While Slifer, one of the founding members, says it originally came from a mostly punk ethos, the group is now more comprehensive.

“The network of other individuals in the United States who are doing leftist political imagery was pretty small,” he says. “We have a broader impact, a broader influence. Now there's a lot of folks from other backgrounds besides white anarcho-punks.”