Princess addresses fluidity in video concept piece, Out There 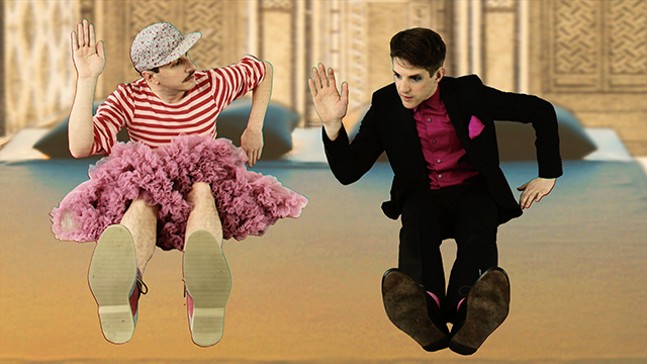 Princess
“Hello” still from Out There

Hairy legs, bright pink tutus, a dress suit, form-fitting blue spandex, and penis rocket ships make up Out There, a video piece by performance duo Princess, comprised of Alexis Gideon and Michael O’Neill. It’s a mash-up of traditionally masculine and feminine notions that toy with gender roles and expectations.

Performed as a live video album, Out There draws from influences like early MTV, Ziggy Stardust, and Deltron 3030. Gideon and O’Neill, each with an instrument, stand on opposite ends of the stage with a screen projecting a stop-motion video between them. The video, created by Gideon, progresses chapter by chapter as Princess plays accompanying music, resulting in an immersive live set that Gideon describes as “an experience that has to be experienced.”

Gideon and O’Neill formed Princess in Chicago in 2004. After a 12-year hiatus and moving to Pittsburgh and Brooklyn respectively, the pair started sending tracks back and forth as a game.

“Then when we were in the same place, we were like ‘Oh, is Princess back together? Let’s make an album.’” 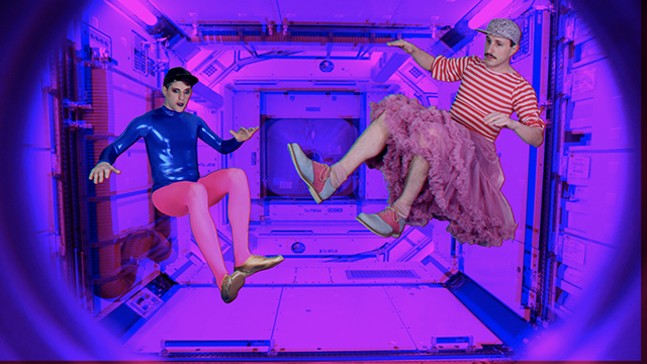 “Vacant” still from Out TherePhoto: Princess

Since Princess was mostly long distance, the majority of the music on Out There was created more or less during one in-person session. As Gideon and O’Neill began recording the project, they slowly understood something was emerging that was more than they’d planned.

“Over the course of the album we realized it wasn’t an album, it was a video piece,” says Gideon. “Then we devolved it along those lines because it really felt like there was a story. It just kind of revealed itself to us over the course of making it and then we really honed in.”

The pair describes Out There as a “sci-fi feminist rock opera.” It’s 2028, and the world has become a misogynistic dystopia. The viewer follows Princess’ journey into space to find a better place to live, as they bounce from planet to planet.

Upon reflection, Gideon and O’Neill realized that the idea of Out There was planted in their subconscious after participating in the 2017 Women’s March, along with the emergence of the #MeToo movement.

“As men, we were being called upon to examine our own behaviors and find ways in which we can support women better as individuals and as a society,” says O’Neill. “We wanted to use [the project] as a vehicle to process our own feelings and comment on how men play a role in the current cultural reckoning of misogyny.”

“Not that misogyny is a new concept,” says Gideon. “It’s something that’s been part of the history of human time. What’s different about this moment is that things are at least starting to be addressed in a way that some of these issues haven’t been addressed before.”

They are aware of the blatant contradictory element in our work. The first title card of the film reads, “as only two white men could.” But for them, that’s what makes the project interesting, it’s problematic.

“We’re creating a piece where one of the messages is that it’s time for men to take a more supportive role, and to listen, and to not just go out and try to solve a problem,” says Gideon. “Then the way we’re doing that is making a piece and touring it all over the country. This is our opening up of the conversation. In no way is this the right answer, in no way this is ‘We have solved this problem.’ It’s ‘We’re upset, this is how we feel. What do you think?’”

But Out There is not an effort only by Gideon and O’Neill. In addition to themselves, TEEN, a rock band made up of three sisters, sang on four of the songs. Local artist Jennifer Meridian created the Divine Feminine planet artwork, and singer JD Samson co-wrote the song heard on that same planet.

“We originally thought [Samson] was going to sing on a song we wrote,” says Gideon, “and she was like ‘Actually that doesn’t really make sense for the theme that you guys are saying this is about.’ We had to give up control of our precious baby. It was a moment in the actual process where the process mirrored the narrative.”

Out There premieres at The Andy Warhol Theater on Fri., March 1, before touring the U.S.