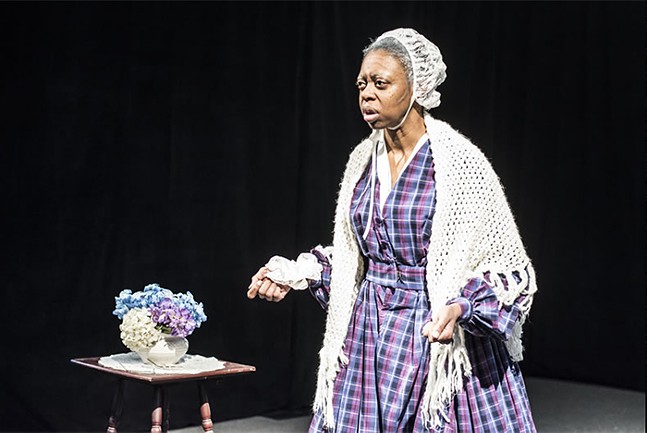 Set in 1851, the one-woman show, written by Richard LaMonte Pierce, stars Flowers as the abolitionist preparing to give her most famous speech at a women's rights conference in Akron, Ohio.

“While I am waiting to go out and speak, a Black journalist comes in and wants to do a short greeting,” says Flowers, a local performer, writer, and teaching assistant. “The play is me talking to this journalist and recalling different things in my life.”

Ultimately, director Linda Haston chose Flowers for the role, but Prime Stage producing artistic director Wayne Brinda claims that Flowers was also singled out by Truth's fifth-great grandson Cory McLiechey. Brinda says McLiechey, who serves as president of Descendants of the Truth, a nonprofit dedicated to the work and legacy of his ancestor, saw a photo of Flowers and said “she’s perfect in capturing the essence” of Truth.

Prime Stage will present its production of Sojourner as a recorded performance available to view online from Fri., Feb. 12 through Fri., Feb. 26.

This marks the second production about Truth presented by Prime Stage, which began with the play A Woman Called Truth about 26 years ago.

“It set the bar for who we are and the kind of work we would be doing as a theater company,” says Brinda.

Born into slavery in 1797, Truth endured years of forced labor and horrific abuse before finally escaping to an abolitionist family, who bought her freedom. From there, she moved to New York City and became a minister, soon gaining a reputation as a powerful speaker. She later shed the name given to her by slave-owners and adopted the name “Sojourner Truth,” dedicating her life to ending slavery and fighting for women's rights before her death in 1883.

While Brinda agrees that Flowers, to some degree, physically embodies Truth, who was recorded as being around six-feet tall, there were other aspects they wanted to get right. For one, the show marks the first time Flowers had to work with a dialect coach to speak as Truth, whose first language was Dutch.

Flowers says that in researching for the role, she noticed accounts of the dignified way Truth carried herself, her posture always straight.

“Immediately, that made me think about my grandmother,” says Flowers, adding that she always had excellent posture up until she passed away several years ago. Because of this, Flowers decided to channel her grandmother in her performance.

Brinda says they drew on research to correct some of the inaccuracies about Truth popularized by historical accounts and previous depictions. He notes how some productions have portrayed Truth as using a cane in her later years, which, he says, she rarely, if ever, did.

“If you're going to do something important like this, you want to make sure you're authentic, you're accurate, and you're respectful,” says Brinda.

Overall, Flowers says that, unlike more celebrated figures in Black American history, such as Underground Railroad leader and Civil War spy Harriet Tubman, very little is widely known about Truth, despite her many incredible accomplishments.

“She has a story that absolutely should be heard,” says Flowers, adding that sexism plays a role in Truth becoming largely lost to time. “I feel as though my community, specifically Black women, has a lot of unsung heroes.”

Prime Stage wanted to focus on the famed “Ain't I a Woman?” speech that still defines Truth and serves as the high point of the play. Flowers and Brinda describe how there are actually two versions of the speech — one that was transcribed by a friend of Truth, Marius Robinson, and one that was published by a white suffragist and fellow abolitionist named Frances Gage. Historians believe that Robinson's version, which does not contain the phrase “Ain't I a woman?,” is the correct version. As a result, it was chosen for the play.

Brinda says they sought approval and verification from Truth's living descendants, adding that they were “delighted to hear” that the play would use her “authentic speech.”

Besides highlighting Truth, especially during Black History Month, Brinda says they chose Sojourner as a way to still bring theater to audiences in a time when the pandemic has moved it online. Brinda says they transitioned to filming and streaming fully-staged, one-person shows as an alternative to livestream performances, which Brinda believes can be a bit daunting for some viewers.

Prior to Sojourner,  Prime Stage presented other biographical shows about Charles Dickens and Albert Einstein. Brinda says they are planning a show for April called Miracle in Rwanda, based on the author Immaculée Ilibagiza's account of the 1994 Tutsi genocide.

While the pandemic has presented obvious challenges, Brinda claims it has also led to Prime Stage reaching more patrons than ever through their online content. He believes that reach will generate more interest in theater among those who may not have otherwise experienced it, and recognize that the artform can be an “entertaining, educational, and inspirational” part of their lives.

“We're making theater accessible and letting people know that theater is accessible,” says Brinda, adding that Sojourner and other Prime Stage offerings include audio descriptions and closed captioning, and are sensory inclusive for those with autism spectrum disorders or other sensitivities.

Though she sees Truth as a figure of resilience and dignity, Flowers tries to avoid using the term “strong Black woman” when describing her, adding that it carries the burdensome connotation and expectation that Black women can and will tackle issues themselves. She prefers to use the term “powerful.”

“I think that Black women are absolutely powerful,” says Flowers. “I feel like women like Sojourner Truth and my grandmother really gave me amazing examples of what it means to stand in that power, and I'm grateful for that.”

Prime Stage Theatre presents Sojourner
Fri., Feb. 12-Fri., Feb. 26. Recorded links will be available for pay-what-you-can with a minimum of $5. Links are available for 24 hours after purchase.  primestage.com