President Donald Trump said coal miners in Southwestern Pennsylvania would be put back to work. One year later, is that happening? | News | Pittsburgh | Pittsburgh City Paper

President Donald Trump said coal miners in Southwestern Pennsylvania would be put back to work. One year later, is that happening?

“Coal is facing a long-term problem.” 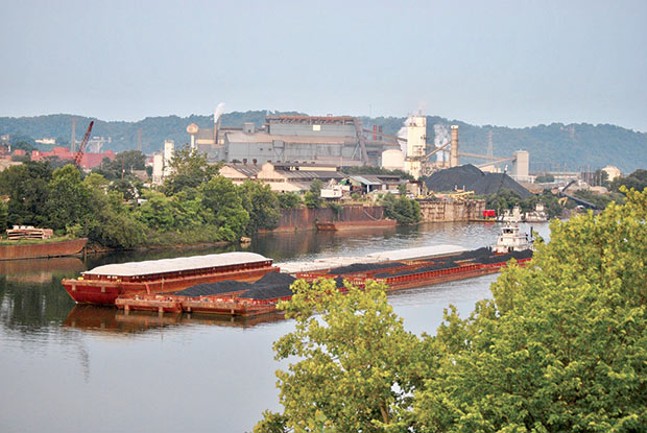 When then-presidential candidate Donald Trump visited the Pittsburgh area during his campaign, he consistently promised that the coal industry would be making a rebound. “Coal — clean coal, clean coal — we’re bringing it back,” Trump said at an April 2016 rally at the David L. Lawrence Convention Center in Downtown Pittsburgh. In July 2016, in Scranton in northeast Pennsylvania, Trump also promised to take care of coal miners and “put them back to work.”

Now, one year since Trump took office, the coal industry in the region has marginally rebounded from a dismal 2016. A few new mines have opened up, the volume of coal mined in the region has grown, and there has been a small increase in coal employment. Trump has appeared to have kept his promise to Southwest Pennsylvanians.

But on Jan. 3, Dana Mining Company announced it would close its 4 West Mine in Greene County. By this summer, 370 people will lose their coal-industry jobs. This will easily wipe out the modest gains in coal jobs Southwestern Pennsylvania experienced in 2017, as well as erase the production gains coal saw here in 2017.

Economic experts warn that coal will continue its long-term, steady decline. Pennsylvania coal-industry advocates are optimistic about coal’s future, and say coal production will remain steady and an important part of the area’s energy portfolio. But even with these diverging views of the overall future of coal, everyone seems to be in agreement about one thing: The coal jobs are not coming back.

“I suggested that [Trump] temper his expectations. Those are my exact words,” said Murray Energy CEO Robert Murray, the country’s largest coal-mine owner, in a March 2017 article in The Guardian newspaper. “He can’t bring them back.”

Pittsburgh City Paper analyzed U.S. Department of Labor data on jobs at coal-producing sites in Southwestern Pennsylvania, including Allegheny, Butler, Washington, Greene, Fayette, Westmoreland and Armstrong counties. (Beaver County had no coal mines, according to the data.) In 2017, the average number of workers at coal-producing sites, like underground and surface mines, in this region was 2,767, an increase of 26 workers compared to 2016, or a growth rate of less than 1 percent.

Nationally, coal jobs ticked up by 771 to 54,819 jobs, an increase of 1.4 percent, according to news organization Reuters.

With the projected 370 jobs lost at the 4 West Mine, this means the region will have to add more than 344 coal jobs to have positive job growth in 2018. Seth Feaster, of the Institute for Energy Economics and Financial Analysis, a Cleveland-based group that advocates for a diverse, sustainable and profitable energy economy, says this will be an extremely difficult feat.

Feaster says there was a positive jolt to the coal industry with the election of Trump, but adds that enthusiasm for coal has since waned, because the demand hasn’t really recovered. He notes that the fourth quarter of 2017 saw a drop-off in coal-industry hiring compared to early in the year.

Feaster also says job numbers over the last several years indicate a bleak future for coal employment. “If you take a slightly longer view of the coal industry, just to 2015, there was still a 13,000-job loss compared to 2017,” says Feaster. “Go back to 2012, you are talking about a loss of 35,000 jobs. Coal is facing a long-term problem.”

Greene County had 2,016 coal jobs in 2017, the most of any county in Southwestern Pennsylvania. It also produced the most coal. In 2016, the county voted for Trump with 68 percent of its vote, a 10 percent increase from votes for the previous Republican presidential candidate, Mitt Romney. And with Greene County only adding 12 coal jobs in 2017, and the announced closure of the 4 West Mine, local pro-coal leaders are blaming Trump.

“They voted for Trump because he said he’d bring back coal. It’s not happening,” Blair Zimmerman, a Democratic Greene County Commissioner and former coal miner, told CNN’s business website Money, on Jan. 10. “There’s not been any significant change in the industry since he’s taken over.”

But the Trump administration has made many policy changes to attempt to boost coal. Trump’s administration has rolled back several environmental regulations, many of which were specially requested by Murray and his company. On Jan. 9, The New York Times reported that just weeks before the inauguration, Murray, who owns coal mines in Washington County, provided Trump with a wish-list of environmental regulations he wanted ended. Murray told PBS’s Frontline that Trump has already enacted many of his suggestions.

Trump’s Energy Secretary, Rick Perry, proposed a plan to subsidize struggling coal power plants, but the plan was rejected by a mostly Trump-appointed Federal Energy Regulatory Commission. FERC cited that the current tariffs on these coal-fired power plants were not unjust or unreasonable.

Feaster says that Trump’s attempt to subsidize coal and his acquiescence to a coal CEO’s request shows that coal is facing intense competition in the energy market.

“It plays really well to stand up for coal, there is cultural resonance in all of Appalachia,” says Feaster. “But there is a difference in politics and economics, and that is the problem with the coal industry. There are huge coal reserves … you could burn them for the next 150 years. But if it is not [economically viable], it doesn’t matter.”

Feaster says that in the Pittsburgh region, coal is getting beat out by natural gas. Drilling for natural gas, particularly through hydrofracturing, experienced huge growth from 2012-2017 in Appalachia, including areas in southwestern and northern Pennsylvania, West Virginia and eastern Ohio. According to the U.S. Energy Information Administration, natural-gas production in Appalachia increased by more than 14 billion cubic feet per day from 2012 to 2017. Dozens of new fracking wells have been drilled in Southwestern Pennsylvania during this time.

“The coal industry has intense competition, and that is not likely to change,” says Feaster. “Its most direct competitor, natural gas, has seen a big growth in production in the Appalachian region.”

Rachel Gleason, director of the Pennsylvania Coal Alliance, a pro-coal industry group, admits that natural gas is coal’s biggest competitor and that its growth has hurt the coal industry. Even so, she sees positive signs for coal in the region.

She says that coal is a more resilient source of power for the region’s electrical grid than natural gas, since coal can be stockpiled at power plants. Gleason adds that it’s important to have coal as a power source so the region maintains a “diverse” energy portfolio. Gleason says coal for power plants will maintain a presence in Southwestern Pennsylvania for this reason.

In Cambria County, in Central Pennsylvania, metallurgical coal mines have seen an increase in production compared to 2016 and 2015. In 2017, Cambria County’s producing mines have added 25 jobs. Yet, overall, there are five fewer coal-mine jobs than there were there in 2015.

But Gleason admits that coal is not going to rebound at levels that would add a significant amount of jobs. “I would say we are probably steady at this point,” says Gleason of coal jobs.

And even though many recognize that coal jobs are unlikely to return in large numbers, the coal industry is still upping its production and profits. In Southwestern Pennsylvania, mines produced more than 2.1 million tons more in 2017 compared to 2015. However, the region lost 185 coal jobs over that time span.

Business-news website Bloomberg reported in October that coal production in the U.S. was up 11 percent in the first nine months of 2017. Some companies like Warrior Met Coal, in Alabama, posted large enough profits in 2017 that it announced plans to pay out hundreds of millions in dividends to shareholders.

Feaster says even if coal companies do better in terms of production, thanks to fewer regulations and government agencies helping them, coal-mine owners are still going to focus on profits over hiring more workers. Feaster says this is typical behavior for the coal industry. “As they talk about coal mining, they are also laser-focused on efficiency and cutting jobs. People … are going to focus on the efficiency.”