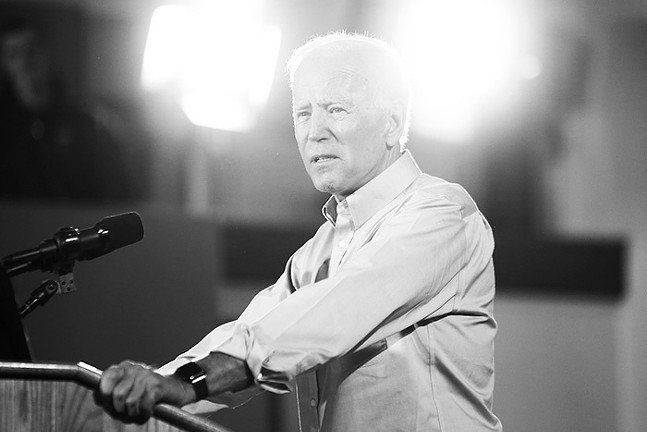 CP photo: Jared Wickerham
Joe Biden in Pittsburgh in April 2019
Unveiling what he called the boldest domestic spending package since the construction of America’s interstate highway system and the dawning of the space race, President Joe Biden returned to Pennsylvania on March 31, releasing the broad details of a $2 trillion infrastructure package that would rebuild highways and bridges, along providing funding programs for housing, broadband and schools and increasing U.S. manufacturing jobs over the next eight years.

“This is a once in a generation investment in America,” Biden said during his appearance at union training center in Pittsburgh. ” … We’ll grow the economy, and it will make us more competitive around the world. It’s big, yes, It’s bold, yes. And we can get it done.”

The stop in Pennsylvania was Biden’s second since taking office.

The Delaware Democrat blanketed the Keystone State during his 2020 White House bid, launching and ending his campaign in the Steel City. Biden visited Delaware County, in suburban Philadelphia on March 16, to tout the benefits of his $1.9 trillion COVID-19 stimulus plan.

The sweeping program would be paid for through a tax hike on corporations, raising the rate from 21% to 28%. The Tax Policy Center, a non-partisan think tank that’s part of the Urban Institute and Brookings Institution, estimates that reform alone is worth $730 billion over 10 years.

Biden told the crowd Wednesday that he wasn’t targeting wealthy Americans, and he pledged that no American who earns under $400,000 would see their taxes increase. Rather, he said, it was about leveling the playing field and making sure that hugely wealthy corporations pay their fair share.

The plan also aims to bring clean energy manufacturing jobs to communities that rely on the coal industry in an effort to encourage manufacturers to locate in those areas.

“Imagine knowing you’re handing your children and grandchildren a country that leads the world in clean energy production,” he said.

Here’s some more of what the infrastructure plan would do:


But as Politico reported Tuesday, the plan also may have to overcome skepticism among Democrats who think it doesn’t go far enough. Among them is U.S. Rep. Alexandria Ocasio-Cortez (D-N.Y.) who said it have said the package “is not nearly enough” and “needs to be way bigger.”

In a statement, U.S. Sen. Pat Toomey (R-Lehigh) said that while he believes “we can and should do more to rebuild our nation’s physical infrastructure,” Biden’s plan would “[undo] large portions of the Tax Cuts and Jobs Act. That 2017 tax reform helped create the best American economy of my lifetime.”

Former Pennsylvania Gov. Ed Rendell, a Biden ally, told the Capital-Star Thursday that he believes Biden has a path to Republican votes, if Congress gets a “clean” bill that isn’t weighted down with extraneous spending items.

“The public wants to see us work together,” Rendell said. There’s something very salutary for the American people to see a bill pass with Republican and Democratic support.”

And when push comes to shove, progressives will be there to vote for the bill, Rendell added.

“If there is an infrastructure bill of the nature of $2 trillion, every progressive would have to vote for it,” he said.

For its part, the White House is looking for bipartisan support for the bill.

“Historically, infrastructure had been a bipartisan undertaking, often led by Republicans,” Biden said, pointing to President Abraham Lincoln’s role in building the transcontinental railroad and President Dwight Eisenhower’s leadership in the construction of interstate highways.

“So there’s no reason why it can’t be bipartisan,” Biden said. “The divisions of the moment shouldn’t stop us from doing the right things for the future.”

The rollout comes at a critical time for Pennsylvania, which has struggled to meet its highway and infrastructure obligations.

In a February report, the American Society of Civil Engineers gave Pennsylvania an overall grade of C-minus for the state of its infrastructure, pointing to the commonwealth’s aging drinking water mainlines, bridges and roadways in poor condition and sewer and wastewater ways in desperate need of repair.

Earlier this month, Wolf, a York County Democrat announced he’d signed an executive order creating a new “Transportation Revenue Options Commission,” a sprawling, bipartisan body made up of state and local officials that would be charged with coming up with a replacement for the revenue the state currently takes in from the tax.

In response to the presidential announcement, a group of more than 360 local elected officials from across the United States, including 111 from Pennsylvania, called on Biden and Congress to approve “robust infrastructure funding to make our communities healthier and protect the environment.”

A coalition of progressive groups in Pittsburgh echoed Ocasio-Cortez’s sentiments, demanding a “real Green New Deal, which addresses all of our human needs and rights, including good union jobs, housing, public transit, healthy food, education, health care, racial justice – and our interdependence with our family of all peoples and nations and ecologies of life, with whom we stand in solidarity for the sake of our mutual survival.”

In Pittsburgh, Biden pledged to deliver a robust and ambitious program: “People will look back in 50 years and say this is the moment where America won the future,” he said.
John Micek is the editor of the Pennsylvania Capital-Star, where this story first appeared. Capital-Star Washington Reporter Ariana Figueroa contributed to this story.