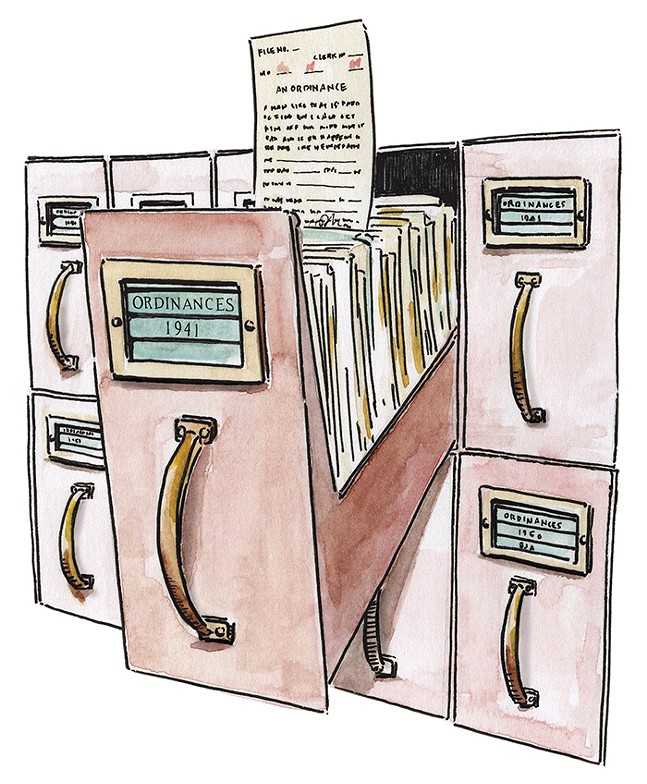 CP Illustration: Abbie Adams
A drawer in a vault containing Pittsburgh City Council ordinances from 1941. The vault contains records for every year of the City’s existence, from 1816 to present.
When the pandemic first began taking effect in March, Pittsburgh Mayor Bill Peduto’s office hoped to include an overview of how Pittsburgh responded to a previous pandemic, the 1918 flu, but found that any documentation of the response was lost or not preserved, except in newspapers.

"If other City records were created, there doesn’t appear to have been an awareness to preserve them from one administration to the next," Nick Hartley, the City of Pittsburgh’s archivist, told Pittsburgh City Paper in March.

Even though Pittsburgh lacked the archives of its 1918 flu pandemic response, this year’s pandemic is well-suited for the city’s current archivists. Hartley has been working in isolation for a couple of years, along with archive assistant Charles Succop, as the only two employees of their field in the City-County Building.

“The need to eliminate such gaps in our record was one of the driving forces behind establishing this division,” said Hartley, of the relatively new department.

In February, City Paper took a tour of the archive department, with samples of some of the oldest and most interesting records the city has on file, to learn more about why, in the year 2020, Pittsburgh's record-keeping department is only three years old. Then the pandemic hit, and the story was put on hold for more pertinent things like how the city is handling the impact of coronavirus and covering weekly protests against police brutality.

But none of those topics are unrelated to the city's archives, which, in addition to keeping a record of every piece of legislation proposed in the city, also contains hundreds of maps, photos, and other documents. And, what’s missing from the records also chronicles its own piece of Pittsburgh’s past. 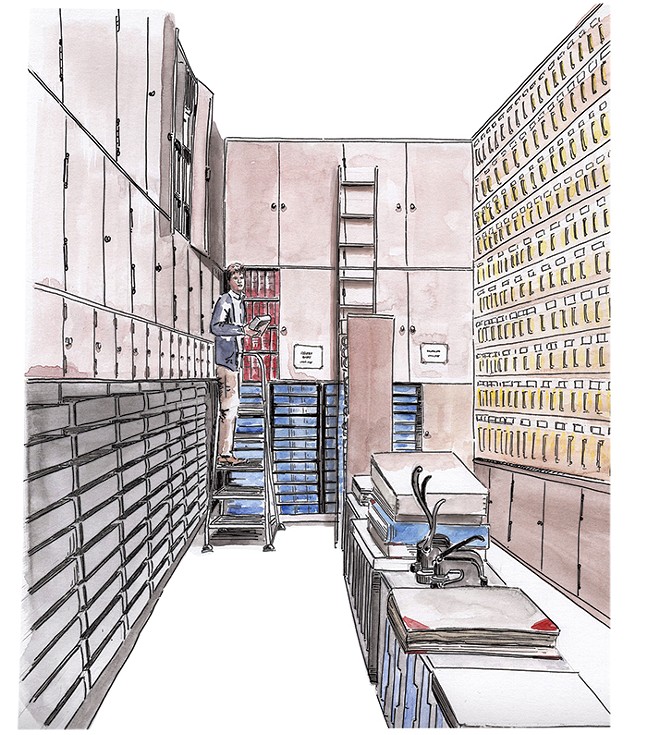 CP Illustration: Abbie Adams
Archivist Nick Hartley in a vault in the City-County Building that contains the legislation of City Council, including ordinances, meeting minutes, and resolutions. The vault is just one of several different locations around the city that contains materials to be consolidated into a city archive.
Until 2017, the City of Pittsburgh had no official records management department. Other than legislation, which has long been archived by the city clerk's office in a meticulous vault, there was no one keeping track of the rest of Pittsburgh’s documents. Around 2012, former City Councilor Patrick Dowd, who was previously a history teacher, didn't like when he saw records of the city's history being kept in a damp basement. Eventually, this led to the creation of Hartley's position, which falls within the city clerk's office.

Hartley is Pittsburgh’s first official archivist, and is now in charge of processing and archiving all the maps, photos, blueprints, lantern slide plates, lot survey record books, street name histories, and other records of how and when the city came to be.

Hartley estimates the city's photography collection alone has over 100,000 documents (the city's official photographer job was eliminated in the '70s). The total amount of files that belong to the archives is several thousand cubic feet (the measurement used in archives). Every major city likely has a similar mass of information, but what makes Pittsburgh's record management department so different from other city's archives is just how new it is. As Hartley puts it, a job of an archivist is usually to work in an already existing department.

"Here's the thing: archivists work in archives. You never make them," said Hartley back in February. "This is so unique. You're never part of making one, especially for such a storied organization that's been around for 200 years."

Most cities, especially of Pittsburgh's size, long ago established systems of preserving and organizing their records. Cleveland's archives, for example, were established in 1814. Philadelphia's department was created in 1952.

CP Illustration: Abbie Adams
Because Pittsburgh's records management department was created so late, there is no easy way for the public to access records or information about the city. City archives are often used by people like graduate student researchers and genealogists, but when they ask questions about Pittsburgh, the answer might be buried in a box in a basement somewhere. Hartley says they often get reference questions, but aren't able to give an adequate answer.

"The public doesn't really have an alternative, so we do what we can to help, but until all the records in our custody are processed, sorted, and catalogued, it can be like looking for the needle in the hay," says Hartley. "Actually, I don't even need a proverb for that. It's like looking for a specific record among millions of others."

And even with an established archive, there are still some glaring gaps in the record. Some underrepresented communities lacked local representatives who brought attention to issues. Hartley notes that certain issues would not appear in city council records, unless there was a councilperson specifically representing their needs and voices.

He gives the example of a record indicating that a street in the Hill District was renamed "Kosher Street," back when the neighborhood had a significant Jewish population. Councilman Enoch Rauh, who was Jewish, received letters and complaints from the community objecting to the name, and so those complaints are preserved in the archive (and the name was eventually changed.)

"You're not going to find a lot of frustrations and problems being expressed from African-American communities or other communities in council records because they weren't represented on council," said Hartley in February. "Until the Civil Rights Movement came about, you're not going to find concerns from those communities documented in council. Not often, at least. The councilmembers at the time were just not serving those communities." (The first Black City Councilperson in Pittsburgh was Paul F. Jones in 1954).

Currently, Pittsburgh's archives don't have a website, or an easy or efficient way to peruse information. (Research questions can be emailed or called in.) But that's all part of their plan for expanding into a more organized, deliberate department instead of a "fledgling" one, as Hartley describes it.

The ordinance to the 2018 Pittsburgh City Code establishing the Division of Records Management defines it as a department that will "manage, store, preserve, and make publicly available records of enduring value to the City, and to implement and oversee citywide records management policy, regulations, guidance and training."

The five-year strategic plan for the department, for fiscal years 2018-2022, outlines its goals, which includes expanding staff to include more archive specialists, digitizing and making accessible municipal records, and creating a better storage system for the records. Attached to the plan are images of how some records were stored before the department was established, which includes a leaky basement and a room full of thousands of unindexed maps. 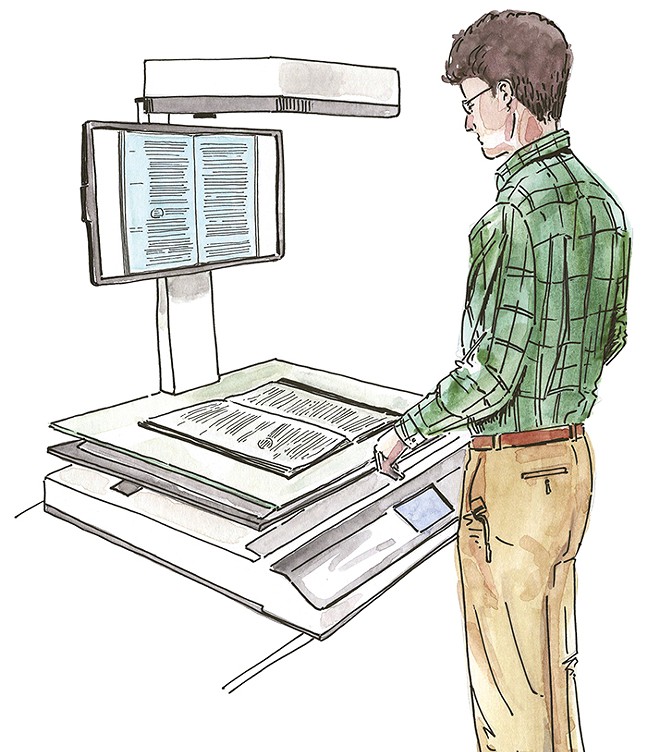 CP Illustration: Abbie Adams
Archive assistant Charles Succop uses a large-scale book scanner in the records processing room on the second floor of the City-County Building.
Hartley became Pittsburgh's first official archivist after working with industrial archive collections at the Heinz History Center. In his own words, he likes to keep his head down, and do his job. Succop, who met Hartley while volunteering for Doors Open Pittsburgh, was so inspired by the archives that he went to graduate school and, earlier this year, got a master's degree in Library and Information Science from the University of Pittsburgh.

Succop has an affinity for archival maps, photos, and stories that spills out beyond his job. He operates two Instagram accounts that document the city and feature some images from the archives: @PittsburgHistory, an account of general city history, and @PghThenAndNow, which features early photos of streets and neighborhoods in the city, compared with what they look like now. (He also runs a third account, @HiddenHousesPgh, which documents residential buildings that have been turned commercial).

Though they have both been at the job for only a couple of years, and the archive department has only existed for a couple of years, Hartley and Succop are technically the best resource for information about the city. Or, as Succop puts it, "If we don't know everything, then we know where to find almost everything."

CP Illustration: Abbie Adams
Throughout CP's visit to the archives in February, we kept prodding them to show us cool, interesting artifacts from the archives. We asked what some of their favorites finds have been, and if they ever look stuff up for fun. Succop eagerly pulled out various maps and glass plate slides.

The earliest record on file is a 1794 record book from the Borough of Pittsburgh, which went missing in 1895 and wasn't recovered until 2016. There are fire maps of Downtown from the 1940s that show what each building is made of and their floor plans. One document, created in the 1930s when the city was turning the Point from an industrial area into a state park, shows the area's ownership over time. Virginia and France also took ownership over the Point at various times.

(Though it may not be recorded in the city's research, the area that is now Point State Park, formerly Fort Pitt, was also the origin of some of the first recorded biological warfare, when British colonists gave blankets infected with smallpox to Native Americans).

CP Illustration: Abbie Adams
An assortment of keys collected over the years hanging in a vault in the City-County Building.
Unlike most people, the archive teams' jobs haven't been changed too much by the pandemic. They're working with history, after all. Other archive teams, like the Detre Library and Archives at the Heinz History Center, are soliciting and cataloguing cultural artifacts related to the pandemic, like signs posted at stores or stories from frontline workers.

Besides offering remote research help, Hartley and Succop have been able to make some headway on organizing the archive. Succop says they've scanned and catalogued various collections — 120 years worth of the municipal record — with an aim of making them available online soon. Succop dug up some interesting information, like hand-drawn maps from the 1920s, or plans for a Ritz-Carlton Hotel on the side of Mount Washington that never came to be.

There are plans to secure a bigger, more permanent space for the archives, which the Department of Public Works is working on. The team recently picked up materials that were in the basement of a building, part of the effort to consolidate materials that have been left unlabeled or organized in random buildings across town.

As Hartley said, archivists aren't usually in charge of creating an archive. But with time, the archive team hopes to establish a manageable, usable archive system accessible to everyone from government officials researching legislation, to college students writing a paper on city history, to the average person who wants to learn how and when their street got its name.