Pre-Occupied Pittsburgh: A fledgling movement gets off to an uncertain start

"The point is to practice democracy. And this is democracy right here -- as messy as it is." 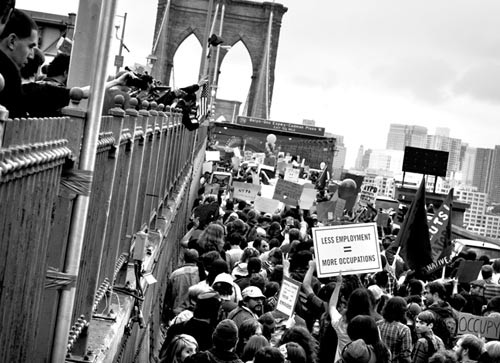 Photo by Ben Valentine
Actions like the "Occupy Wall Street" invasion of the Brooklyn Bridge have sparked groups across the nation to get involved. Whether Pittsburgh's event reaches these heights remains to be seen.

If this was a typical alt-weekly newspaper story about a protest movement, we'd be telling you all about the upcoming "Occupy Pittsburgh" protest slated for Sat., Oct. 15. We'd let you know the wheres and whys and hows -- all that stuff -- while interviewing organizers about their tactics and goals.

This is not, however, a typical alt-weekly newspaper story. Because Occupy Pittsburgh is not a typical protest movement. Although maybe in the end, it will be. It's hard to say.

Here's what we can tell you for sure as this issue goes to press Monday evening: At 10 a.m. Saturday morning, Occupy Pittsburgh will be holding some kind of event, somewhere Downtown. Some people will attend, to show their solidarity with the ongoing "occupation" of Wall Street, an anti-corporate uprising that has caught the attention of the world. Some Pittsburghers plan to stage an overnight encampment, holding a multi-day vigil similar to the one in New York. But again, plans are hazy.

Here's the thing: Occupy Pittsburgh is seeking to be a non-hierarchical counterweight to corporate hierarchy. It aspires to be a leaderless movement, attracting a whole new crop of activists. And to a large extent, it has succeeded. That's why it's such a hopeful movement -- and why it is, at this writing, such a goddamn mess.

As one Occupy Pittsburgh participant, Garfield resident Darren Belajac, put it during an Oct. 9 discussion with other would-be occupiers: "The point is to practice democracy. And this is democracy right here -- as messy as it is."

When Leah Houser first learned of the Wall Street occupation, she was motivated to do something she'd never done before: Stand and be counted.

Since the Wall Street dissenters began their vigil in Zuccotti Park on Sept. 17, they've been a beacon to people like Houser, who feel that both the economic and the political system are being run for the benefit of the wealthy few.

"We need to let it be known that we are hurting," she says. "Corporations need to be taken out of politics, and the politics put back in the hands of people."

Despite holding a degree in visual communications, Houser herself has struggled to find work. "I have a daughter, and I can't be the kind of mother I want to be because of the economy. I went to college, but I can't get a job -- and my neighbors are going through similar things. People have lost their spirit."

Originally, Houser wanted to see the Wall Street protest in person -- "but a bunch of us had to work, and we didn't have a legal car." So she started a Facebook page to organize a protest here instead.

The page attracted a handful of others who, like Houser, were not protest veterans.

"I've never ever been to a protest in my life," says Jess Kelly, a mother of four in Sarver. "I've seen things that I disagreed with, but I never did anything." Still, she'd grown increasingly concerned that "our government has been pretty much infiltrated by big corporations, and it's representing them more than us. We bailed out the banks, but who is bailing out us?"

Many agreed: The page attracted more than 2,000 likes in its first few days, and by Oct. 5, Houser and Kelly were helping to lead a "general assembly" at Shadyside's First Unitarian Church.  Some 350 people were seated before them, anxious to plan an occupation in Pittsburgh.

"I didn't really know what I was getting myself into," Kelly says. "I'd never done any of the stuff I did that night."

Protest veterans were thrilled by the turnout. Mel Packer, a long-time environmental activist, says that "When you've been around as long as I have, you can look around the room and know 80 percent of the people there." At the Occupy Pittsburgh gathering, "I didn't know 90 percent of the people in that room -- but I know we were all thinking the same thing."

If so, it was hard to tell -- in part because so many were new to organizing protests. Much of the Oct. 5 meeting was taken up with an argument about the principles of non-violence; though an overwhelming percentage of the room supported those principles, a "consensus process" for gauging that support proved cumbersome. Other participants objected to the lack of diversity.

"Most of the speakers were white men," said Wilkinsburg resident Bekezela Mguni afterward.  "It's the repetition of white privilege."

With much of the meeting consumed by such issues, organizers created "working groups" focused on various aspects of the protest -- like choosing a location and tactics for the protest, and drafting a statement to explain its purpose. A second meeting was called, at which the working groups were to present their proposals for the group.

But Houser's Facebook page was soon peppered with complaints that the meeting had been  "absolutely ridiculous" and "a waste of time." And the second gathering, held in Oakland's Schenley Plaza Oct. 9, attracted just 175 people -- about half the size of the previous week's gathering.

"We're having a body shortage," Chris Mason, one of the facilitators, acknowledged. "Probably because of the Steelers game."

The Oct. 9 meeting bogged down, too, partly because the roles of working groups hadn't been clearly defined. Was proposing the route of a march, for example, the job of the location committee, or the "action" committee? And how to reconcile the fact that the groups disagreed on the day's events?

Now a third general assembly has been called for, even though Oct. 15 is days away. Adding to the pressure: The one decision that was reached Oct. 9 was to have some sort of permitted event starting at 10 a.m. and ending at 3 p.m. Organizers need to obtain that permit by the end of the week, though it's not clear precisely what they are seeking a permit for.

As of press time, Occupy Pittsburgh spokesman Nathaniel Glosser said neither a time nor location for the third assembly had been set. "I wish this was easier," he told City Paper. Glosser said organizers were "hashing out the details" of the permitted event, and hoped to apply for their permit before this issue hits the streets.

Also unclear: the location for the Occupy Pittsburgh encampment, where protesters will hope to camp out overnight, like their compatriots on Wall Street. While protesters have discussed using area parks, the city previously rejected overnight camping by activists during the G-20 summit in 2009; a "campsite" in Point State Park was allowed to operate only during regular daylight hours. (One possibility: sleeping on the sidewalks. In 2007, a group of antiwar protesters won a federal court order to camp overnight in a rigidly defined area in front of an Oakland military recruiting center.)

And at least the protest's location was discussed Oct. 9: Most other working groups didn't get to present their ideas to the group before the meeting broke up.

"I'm very unhappy with this meeting, obviously" said Paul LeBlanc, a LaRoche College professor who'd worked on the committee trying to draft a statement. "We didn't even get to present our proposal."

Still, within the working group itself, LeBlanc added, "We had a great process. And the thing I love is that there is passion and engagement."

In fact, organizers say, if Occupy Pittsburgh has stumbled, it's precisely because it is an organic, spontaneous movement.

"We have a lot of people who aren't experienced in organizing, and we don't have the time to organize the way we'd like to," admits Houser, whose Facebook page started it all. "But the people in Wall Street didn't have that in advance either; they just did it as they went along."

Pittsburgh's would-be occupiers are striving to address concerns such as the lack of racial inclusiveness. Although specifics on the Oct. 15 protest are scarce, organizers do plan to have a feeder march for the event begin at the Hill District's Freedom Corner, a site prominent in the civil-rights movement.

"There is going to be a bit of a struggle to get African Americans involved," says Carl Redwood, who heads the Hill District Consensus Group.  But Occupy Pittsburgh "is already a success. There are lots of young people involved. They're creating their own way."

The bickering may be an inevitable -- and essential -- part of that. Just prior to the Oct. 9 general assembly, members of the statement working group had an animated discussion about how to explain the occupation movement's goals -- and what those goals were. Eventually, a couple dozen people, many of whom had never met before, were participating in a rapid-fire back-and-forth that spoke to the heart of organizing a protest.

"You'll lose people right off the bat if you talk about global issues," Jim Bonner, a recently laid-off Port Authority driver argued. "We need to come up with statements and demands that people can relate to."

But Tayfun Gol, a Turkish-born tutor, countered that American military exploits overseas is directly related to those issues. "The war is costing $6 billion a day," he observed. "This is connected to service cuts in their communities."

Crafting a clear statement of purpose is key, says Occupy participant Ingrid Nagin of the North Side, even if it won't be easy. During the 1960s, says Nagin, 62, protesters opposed to the war in Vietnam had a simple message: "Stop the war." But the issues today are as sprawling as the global economy itself: "I don't know how you get a simple statement," she says.

The fact that so many people are willing to meet and discuss economic issues, some say, is a statement in itself.

"I thought the meeting was great," said Jasmine Burton as the Oct. 9 gathering broke up.

Even though hardly anything was accomplished?

Burton shrugged. "At least people got to vent," she said. "And when they vent here, at least they get an answer."