Prairie is the newest restaurant in Pittsburgh’s Garfield neighborhood 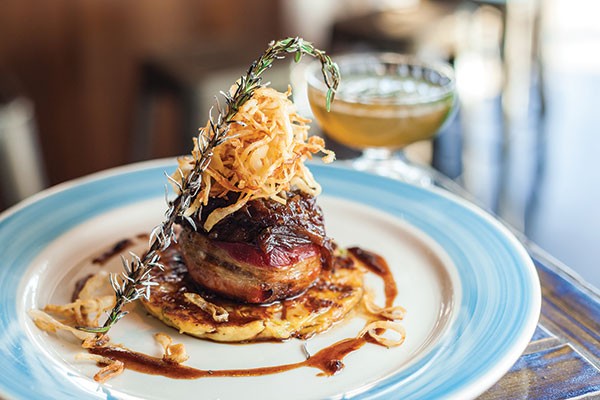 In the competitive world of restaurants, proprietors tend to hold on till the last dollar. Jeff Catalina of Verde, the tequila-centric cantina and restaurant on Penn Avenue, took a different tack. Sensing the air leaking from his contemporary-Mexican concept, he closed it. Then, he rebooted in the same space with Prairie, featuring updated comfort food of the American heartland.

The restaurant’s name is evocative of this theme, if not the local geography. The interior has been lightly refreshed — reclaimed barn wood, naturally — but the essentially modern design, with exposed ductwork and suspended panels of angular shape, has held up well enough. On a warm evening in early spring, we chose to sit outside on the patio. Its situation along, but also just above, the sidewalk made for a good view combined with agreeable separation from traffic.

The menu pulls off a neat trick: While the bones of it — mac-and-cheese, Brussels sprouts, roasted chicken — are as middle-American as could be, distinctive touches to each dish add up to a cohesive story, with an eye toward swimming beyond the mainstream. Touches like scallions and cornbread croutons on campfire chili, or the potato-cauliflower pancake and balsamic onion jus that accompany the bacon-wrapped bison meatloaf. These are the dishes your grandparents made and ate, updated using the same culinary logic by a generation with access to and awareness of so many more foods.

We were impressed with the menu, but it all comes down to execution. Despite the early-spring weather, the menu was still in wintry mode, with plenty of root vegetables and warm spices, and we found these flavor profiles almost uniformly successful. The beer cheese in the IPA mac-and-cheese was creamy and mild with underlying earthy, but far from bitter, notes from the hops. Cinnamon-honey butter, served with the skillet cornbread, was subtly sweet, stopping short of frosting-like. When the kitchen made an unexpected move, as with the apricot-root vegetable relish on the house burger, it was a resounding success, slightly sweet but balanced by smoky cheddar and bitter frisee.

The burger itself was a standout: The grass-fed beef was flavorful enough to support all the other tastes without getting buried, and the seven-grain bun was a hearty upgrade to the afterthoughts that are most burger buns. Gourmet burgers — and this one costs $15, including a side — are ubiquitous these days, but Prairie’s is one of the few we expect to remember months from now.

The biscuit that accompanied the roasted chicken was another bread triumph, rich and tender without heaviness or weak structure. The accompanying herb gravy was sound, if a touch salty, but the biscuit was so extraordinary that Jason kept pulling off plain bites. The chicken had almost mahogany skin, and the meat was suitably supple and moist.

Overall, preparation was strong at Prairie, but there was a lone exception. Brussels sprouts gratin were barely cooked, so that they had crunchy centers and scarcely any browning. All the other ingredients for not-your-grandmother’s-Brussels-sprouts were in place: breadcrumbs, bacon, Parmesan cheese. But the firm little cabbage heads were too far to the other end of the spectrum from Grandma’s boiled Brussels mush.

Pappardelle with sausage demonstrated how deliciously middle-American home cooks adapted Italian pasta to their gardens and grocery lists. Prairie’s own recipe, available with either house-made pork or seitan sausage, also featured smoked onion, kale, fennel and apple in a sage-cream sauce. The resulting flavor medley was rich yet vivid with bold notes of smoke and salt on the one hand, and aromatic herbs and sweet-tart fruit, on the other.

Where the pappardelle was a triumph of America’s melting pot, skillet corn bread was a contradiction. The skillet preparation is classic Southern style, but the recipe was, alas, yet another in Pittsburgh’s endless parade of cakey, sweet Northern-style cornbreads. The combination yielded something dessert-like that — especially with sweetened butter — seemed to belong at the end, not the beginning, of the meal.

Our actual dessert, billed as “just a darn good chocolate-chip pecan cookie,” was even better than that, served lusciously warm and almost molten.

Many have tried, and few have succeeded, to turn common dishes made with humble ingredients into memorable, modern meals. Prairie’s spot-on sensibility for ingredients and preparation makes it one of the few.