"I think they bring back a tremendous amount of nostalgia for people." 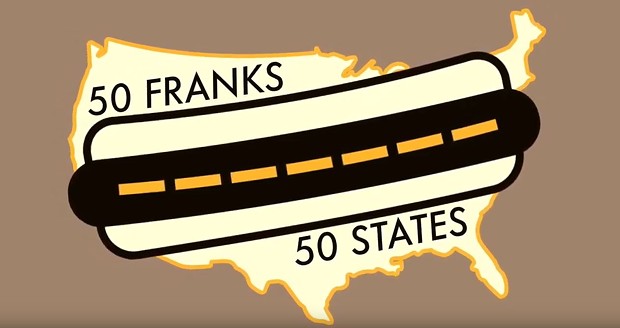 Screenshot from 50 Franks 50 Franks YouTube video
Traveling the country, one hot dog at a time
In the late '90s, PBS aired A Hot Dog Program, a Rick Sebak production that explored regional variations of the dish, from the classic New York dogs to caribou dogs in Alaska. Now, the owners of local hot dog joint Franktuary are continuing on the dog-hunting spirit with the YouTube series 50 Franks in 50 states.

On Jan. 1, Franktuary co-owners Tim Tobitsch and Megan Lindsey launched 50 Franks with their first video, featuring a road trip to West Virginia and tasting of the regional slaw-dog. A Facebook post announcing the series describes it as "part travel vlog, part one-man-hot-dog eating competition," with a new video of a new hot dog in a new state premiering on the first of every month.

Tobitsch loved A Hot Dog Program as a teen, and got the idea for 50 Franks from a conversation with Sebak, who was encouraging of the idea. "At the time I knew nothing about video editing or YouTube but that was probably like 3 months ago," says Tobitsch. The videos are lo-fi, with no professional equipment or editing involved, but that adds to the charm.

Tobitsch will gather suggestions for hot dog destinations mostly by suggestion. He belongs to a Facebook group called Hot Dog Nation, where people are "very very serious" about hot dogs. He's hoping that the video series will take off enough that people start offering suggestions in the comments.
Success for 50 Franks could also make it easier to fund hot dog travels, especially to Hawaii and Alaska. As is, Tobitsch is building in hot dog excursions into already existing trips. For an upcoming visit to a friend in Winnipeg, Canada, Tobitsch is taking the long route by flying to Minnesota and then driving through North Dakota to cover more hot dog ground.

Regional hot dogs can get very specific, and people can have very strong feelings about the right and wrong ways to cook and top the dogs. For Tobitsch, cheap hot dogs and ketchup are at the bottom of the list. For Lindsey, boiling is a no-go.

Ultimately, the project is an ode to the hot dog as a food near and dear to Americans' hearts. It is the rare genre of popular food that doesn't have a slew of chain restaurants dedicated to it. Occasionally, there is a Nathan's in a mall or rest stop.

"Generally speaking they're these independent, mom-and-pop shops. I think they bring back a tremendous about of nostalgia for people," says Tobitsch.

Lindsey notes that even healthy eaters will submit to a tasty dog.

"I was reading an article recently about parents who consider themselves healthy eaters and the degree of allowance for less healthy foods that they will make if they have a very strong emotional connection to it," she says. "I think hot dogs kinda fit into that category."