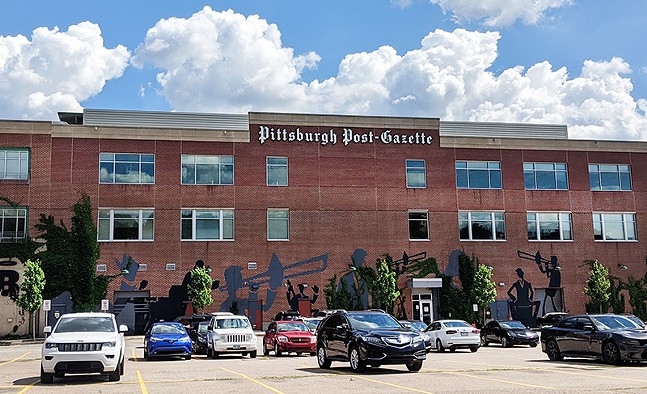 CP photo: Lisa Cunningham
Pittsburgh Post-Gazette offices in the North Side
UPDATE - 3:05 p.m., Mon. Sept., 14:
About a month after the union of journalists at the Pittsburgh Post-Gazette voted to authorize a strike request, their parent union has officially endorsed that decision. Today, the NewsGuild-CWA Executive Council unanimously endorsed the Newspaper Guild of Pittsburgh members’ request to strike by a 10-0 vote.

In August, about 120 members of the Newspaper Guild of Pittsburgh voted by a count of 88-31 to authorize a strike request. With the endorsement from the the NewsGuild-CWA Executive Council, a strike of the paper's journalists moves one step closer to reality.

“A decision to strike is never made lightly,” said NewsGuild President Jon Schleuss in a press release. “This one comes amid a worldwide pandemic and resulting economic crisis. It underscores the attack on more than 120 award-winning journalists, whose repeated attempts to engage the company in good faith bargaining have yielded no results.”

The Guild will soon present a strike plan to the Communications Workers of America Executive Board for approval. Then CWA president Chris Shelton would have to authorize the strike and set a date.

"The staff of the Post-Gazette was awarded the Pulitzer Prize, journalism's top honor, in 2019 for its coverage of the Tree of Life massacre,” said NewsGuild Executive Vice President Marian Needham in a press release. “And what’s their reward? An unrelenting assault on the bargaining process, their contract and their careers by Post-Gazette management.”

Post-Gazette management recently hired a Stan Wischnowski to serve as the new executive editor of the P-G. Wischnowski is replacing Keith Burris, who will now  concentrate on his roles as vice president and editorial director.

Union officials are hopeful that Wischnowski will lead to a more harmonious relationship between management and the Guild.

"Stan has a track record of working with the Guild rather than punishing it,” said Diane Mastrull, an editor at the Philadelphia Inquirer, president of the Philadelphia NewsGuild and regional vice president of The NewsGuild. “Stan used to express disgust over what was happening in the Post-Gazette newsroom. Now’s his chance to do something about it.”

“The newsroom staff has rightfully earned journalistic accolades even as BCI despicably treats its journalists as chattel,” said Newspaper Guild of Pittsburgh president and P-G reporter Michael Fuoco in a press release. "We are committed to journalism, the Post-Gazette, and the community we are humbled to serve and are doing everything we can to avoid a strike."

The 123 guild members have been holding a mail-in election over the last 10 days, and ballots were finalized today. Two other CWA unions at the newspaper, Pittsburgh Typographical Union #7 and Mailers Local M-22, have also both unanimously authorized a strike. With those additional unions, that is about 163 employees who have voted to authorize a strike at the Post-Gazette.

On July 28, the P-G ran a story about the new contract, which stated that ownership and the guild have “reached an impasse in contract negotiations” and so ownership implemented certain portions of what the story described as its “final contract offer to the Guild."

Fuoco told Pittsburgh City Paper on July 29 that there is no new contract, that P-G management unlawfully declared an impasse, and that ownership is imposing its terms on to the guild members. He says ownership eliminated seniority, severance, and the ability for workers to file grievances. According to Fuoco, management is forcing members onto their health-care plan, which can be altered at any time.

A request for comment to P-G management was not immediately returned.

"Today's vote clearly shows that our members are fed up with the Post-Gazette's long-standing refusal to bargain in good faith," said Guild unit chairman and P-G editor Jonathan Silver. "Our members fully understand the egregious nature of the company's wrongheaded decision to unlawfully declare an impasse and impose work conditions without bargaining, and now they have sent a loud and clear message to the Blocks."

Fuoco said in a press release that the union is happy to enter back into negotiations with management, but says that without the company rescinding its "illegal changes to our working conditions," the union is ready to "withhold our talent" from the paper.

The Post-Gazette's reporters were awarded the Pulitzer Prize in 2019 for their coverage of the Tree of Life synagogue shooting. P-G journalists have been working without a contract for the last few years, and they have gone without a pay raise for more than 14 years. Tensions between the union and ownership boiled over last year when journalists completed a “no confidence” vote against P-G management. And tensions have only increased since then. In December 2019, CP documented how the stressful and chaotic work environment of the newsroom led to longtime and accomplished journalists fleeing the paper.

In June, things got worse. After P-G management removed two Black journalists, Alexis Johnson and Michael Santiago, from Black Lives Matter protest coverage for an alleged “bias,” union leadership stood in solidarity with Johnson and Santiago and demanded that Burris and managing editor Karen Kane both resign. The Post-Gazette has since lost large advertising clients and was removed from Giant Eagle grocery stores in response to Johnson's and Santiago's removal from protest coverage. Santiago has since accepted a buyout, telling CP, "I can’t work for a paper that treats their employees like this." He's one of at least 14 employees who have left the newspaper in its latest round of company buyouts.

It's unclear when parent union leadership from The Newspaper Guild and CWA will decide to authorize the strike.