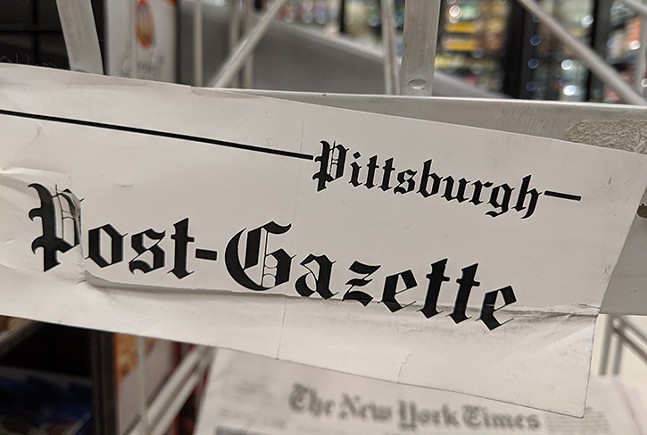 According to a letter sent to the Guild, the Post-Gazette will cease printing on Fridays starting Feb. 27. This means that the paper will have print copies on only Thursdays and Sundays.

In a tweet, the Guild criticized this decision and the Block family, which owns the Post-Gazette. "The Block family continues to show time-and-time again that they do not care about delivering strong journalism to readers in Pittsburgh," read the Jan. 13 tweet.


The Block family continues to show time-and-time again that they do not care about delivering strong journalism to readers in Pittsburgh. Our @bladeguild colleagues have seen similar print delivery cuts.

In a letter to Guild interim president Ed Blazina, Post-Gazette management wrote that "these actions by the Company are part of the Company's entrepreneurial and First Amendment decision to deliver our news content exclusively through digital platforms."

In 2018, the Post-Gazette announced it would become a "digital news organization" and has since hinted at eventually eliminating the print product all together.

This would be the end of an era, as the Post-Gazette has printed for more than 200 years in the Pittsburgh region. Pittsburgh is also home to the Pittsburgh Tribune-Review, which is also largely on online daily newspaper, but does print in suburban areas across the region.

The Post-Gazette has experienced years of turmoil, as management has conflicted with union staff over offensive editorials, a newsroom tirade by Post-Gazette publisher John Block, and calls for editors to resign. Last year, the paper banned Black journalists, and those who stood in solidarity with them, from covering Black Lives Matter protests. This has led to a lawsuit against the paper.

There have also been allegations of sexual assault against a former Guild president and Post-Gazette reporter.

All the while, union journalists at the paper haven't seen a raise in 14 years, and have gone to court with management over health care benefits. Dozens of journalists, many award-winning, have left the paper in the last couple of years. Management has continued to insist that the Post-Gazette loses money every year, while the Guild has said that the paper's parent company Block Communications Inc., continues to make large profits overall.

Union journalist at Post-Gazette's sister paper, the Toledo Blade, have said they are going through similar dysfunction and newsroom cuts and strife.

In a tweet, the Pittsburgh guild vowed to continue to stand up for quality journalism.

"NewsGuild journalists at both papers continue to fight to keep local journalism strong and to create diverse, representative newsrooms," reads a Jan. 13 tweet.  The best way to accomplish this is reach a fair contract that secures these ideals that the Blocks have abandoned."