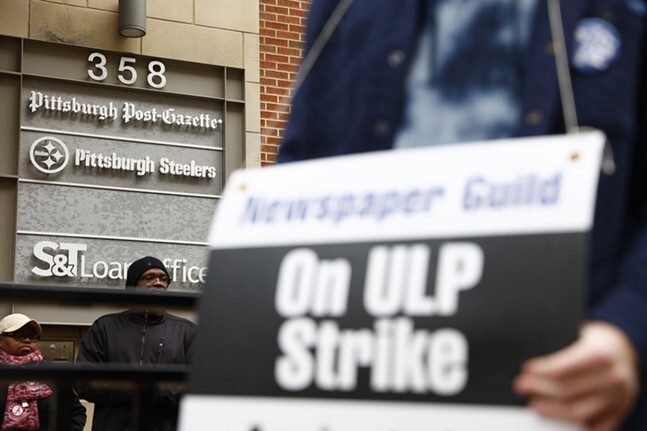 CP Photo: Jared Wickerham
Newspaper Guild of Pittsburgh workers strike outside their North Side office on Tue., Oct. 18, 2022.
A substantial minority of reporters have left the Pittsburgh Post-Gazette’s union so they can continue working after the news guild launched a strike this afternoon, sources tell Pittsburgh City Paper.


Some of those who have left say they were rushed into taking a vote, which, they add, came with top-down pressure from parent labor organization Communication Workers of America in order to shore up support for an existing strike led by other newspaper departments.

“I want the general public to know this is not a show of solidarity,” said one P-G reporter who spoke on condition of anonymity. “I absolutely want all the best for my coworkers and all of the production team, but this was not the right way to go about the process.”

Multiple sources, whose identities were verified as P-G reporters by City Paper, independently reached out to CP to express their disapproval of the strike. The demonstration began at noon on Tuesday, 12 days after about 60 workers from the company’s mailing, print, distribution, and advertising departments walked off the job in protest of lapsed health care coverage.

The union voted 38-36 in favor of striking Monday, with many of the remaining 27 members reportedly unable to vote because of lapsed union dues.

An internal Post-Gazette email shared with City Paper claims 40 guild members have already resigned in response to the strike.

Zack Tanner, president of the Newspaper Guild of Pittsburgh, says the union has not verified the total departures but tells City Paper the number quoted in the email, “sounds high.”

Prior to the strike, the Newspaper Guild released a statement saying 101 journalists were preparing to walk out.

Those against the strike say they are concerned about their own economic security, and that of the newspaper, which has reportedly been running at a loss for decades.

“My feelings are that we have had a very tough negotiation over the last five years, we’re also dealing with an industry in peril and a paper losing millions of dollars every year,” another source told City Paper. “In spite of that, the Blocks have continued to maintain the Post-Gazette, and they’ve maintained it to a pretty high standard.”

Disaffected union workers say they were only alerted to the vote less than 24 hours beforehand, and then learned the CWA had insisted the strike take place regardless of union sentiment.

“A lot of us really felt like we weren’t being heard, and it didn't matter what we had to say because we had to strike anyway,” a source said.

Tanner tells City Paper the strikers are making a stand to help all employees, including those who have left the union. He said the vote was held according to rules after the related labor units called on the guild to join their walkout.

“The CWA unions had a right under the constitution to ask us to join their picket line. They made that request, we held a vote yesterday and it passed,” Tanner tells City Paper. “We’re not going to stop talking to them, we’re not going to stop answering the questions. When we win this, which we will, we’re all going to be standing side by side.”

The news guild has been without a formal contract since negotiations broke down in 2017 and is awaiting a verdict from the National Labor Review Board on claims of unfair labor practices.

Guild members say they’re putting together a temporary publication to keep readers informed while the strike is in effect.

Guild Secretary Alex McCann, who shared the news with City Paper earlier today, says more details, including info on an upcoming "strike publication," will be reaching the public soon.