Portraits of local arts folks themselves comprise a fine exhibit at 707 Gallery.

This project is flush with the artistic risk of unpredictability. 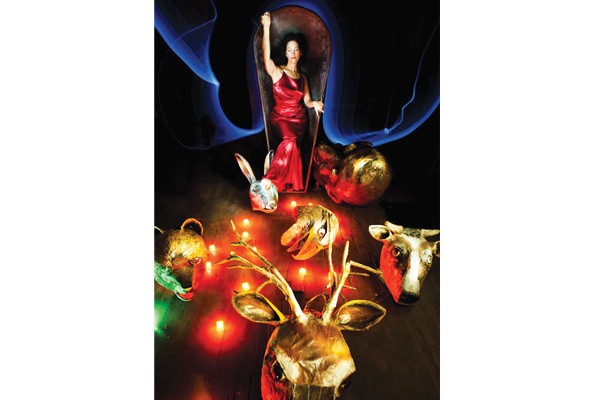 Suddenly it seems there's colored light everywhere: from the Greyhound Terminal to the top of Gulf Tower, from brightly hued compact fluorescents to the strings of cycling colors adorning half the back-bars in town. That is to say, the chromatic vigor of After Dark, an exhibit by Pittsburgh-based photographer-musician Colter Harper (Rusted Root, etc.) and media artist Carolina Loyola-Garcia, is in tune with the times. Critics might prefer anonymity, but artists live to be recognized, and After Dark puts them in the spotlight in this selective who's-who of local culture luminaries.

In most cases, the artist is posed front-and-center in a setting relating to her or his creative endeavors. Generally, the subject anchors the image while leaving room in the surrounding space for the play of light and color, with a 30-second exposure enabling the capture of traces of added light.

It seems entirely appropriate that Quantum Theatre's Karla Boos and chanteuse Phat Man Dee appear theatrical, afloat in a sea of props and light painting. Sculptor James Simon emanates a colorful presence while taking a much-deserved rest, in a bathtub.  And painter Brian Brown's portrait looks as surreal as a Brian Brown painting.

In some cases, festiveness seems to take priority over channeling a sense of the subject or her work, as with visual-art polymath Ayanah Moor, whose backdrop of rust-brown prints are keyed up with a Times Square palette. It's not that it's insensitive to the artist or the art. Rather, it's a non sequitur that could be considered a play of pure creativity.

This project by Harper and Loyola-Garcia is flush with the artistic risk of unpredictability, in which not entirely controllable forces are unleashed. The completed photographs had to have been something of a surprise to the photographers as well as the subjects. The resulting After Dark is not only a visual delight, but also a heartfelt tribute to our creative class.