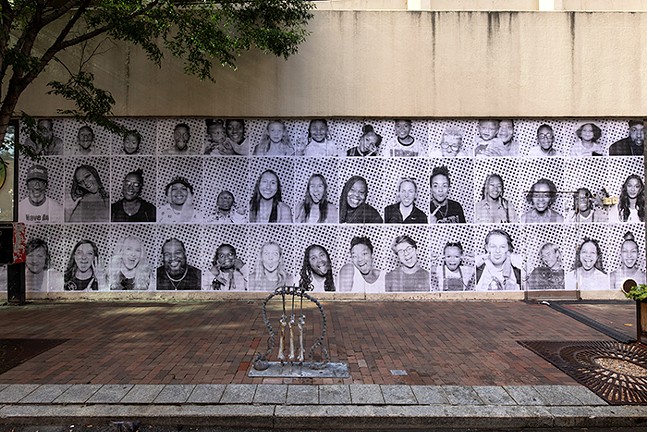 Photo: courtesy Inside Out Project
Portraits put up on the Sixth and Penn Garage
To bring awareness on the importance of establishing a pathway to citizenship for immigrants in the United States, a new public art program has come to Downtown Pittsburgh and is being championed by Pittsburgh-area immigration advocates Monica Ruiz of immigrant service group Casa San Jose and Pennsylvania Second Lady Gisele Fetterman.

"Inside Out 11M" is a program that kicked off on Sept. 5 at Market Square. The project team collected portraits from the public that includes immigrants and the descendants of immigrants, including photos of Ruiz's children and husband, all of whom are people who immigrated to the U.S.

"[The portraits] were just beautiful," says Ruiz. "I have two sons that were not born in this country, and their faces are on the side of a wall downtown. I think that that's beautiful because they've only been in this country for a few years and what they're going to do in the future to make not only this country but the city such a better place, to me was beautiful."

Participants at the event were allowed to take their pictures by the Project Team and join thousands of others nationwide who used art as an expression of standing in solidarity with millions of immigrants. The black and white portraits of those who participated have been placed inside The Space Gallery and on the Sixth and Penn Garage, both in Downtown Pittsburgh.

Initially created by the award-winning artist JR," Inside out 11M" was created to pay tribute to individuals by displaying their portraits in public spaces worldwide and transforming messages of personal identity into works of public art.

"Inside Out 11M" is currently on a national tour. The project visited cities including Phoenix, Denver, Detroit, Milwaukee, and Washington, D.C. The project has lasted over 12-years and has worked with more than 400,000 people spanning and 138 countries. Inside Out Project has amassed over 2,000 actions, and all have centered on various social justice topics.

Inside Out Project's portraits hope to bring awareness to U.S. Congress this fall to help create a path to citizenship for estimated 11 million undocumented immigrants who currently live in the United States. Ruiz described the current immigration system as flawed and was created only to make the process difficult for people who want to live in America.

"We don't need to fix this problem; we need to create a new system where it's going to facilitate and encourage and help people immigrate to this country," says Ruiz. "I feel like this shouldn't be like a legal or political issue, it's a human issue."