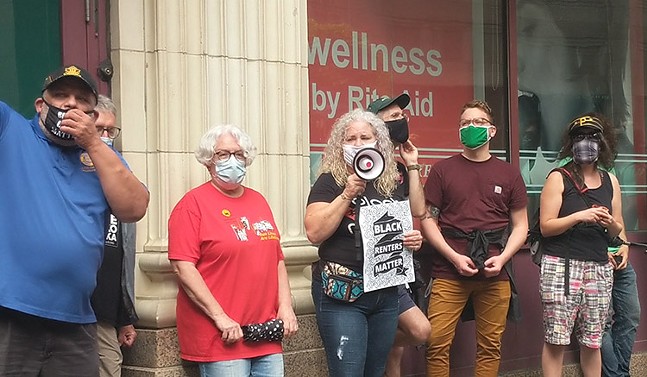 CP photo: Lisa Cunningham
Protesters show support for bus operators wearing Black Lives Matter masks in Downtown Pittsburgh on Wed., Sept. 2, 2020.
A group of about 20 Port Authority of Allegheny County employees and allies gathered in Downtown Pittsburgh on Wednesday afternoon to show support for bus operators and workers who claim they are being penalized for wearing Black Lives Matter masks while on duty.

"We're here to support the majority of our operators and the majority of our passengers and to make a stand in this time of change that's long in the works," said a member of Amalgamated Transit Union Local 85, who was wearing a Black Lives Matter mask and who asked not to be identified because of retaliation. "We want to show our support, and we don't want to be disciplined for it."


Sascha Craig, an instructor for Port Authority, spoke before the crowd, which stood in a line on the sidewalk across the street from a popular Sixth Street bus stop as a steady stream of buses continuously passed by the protest which lasted just under an hour.
click to enlarge

CP photo: Lisa Cunningham
Port Authority of Allegheny County instructor Sascha Craig addresses the crowd of protesters.
"The coronavirus hit us about six, seven months ago. Port Authority of Allegheny County and its CEO Katharine Kelleman ('KK') said, 'Wear whatever you want to wear,' and it was fine. Up until West Mifflin division director Heather Wilhelm took it upon herself to say that Black Lives Matter masks can no longer be worn," said Craig. "So Port Authority took it upon themselves to circle the wagons and protect their management. It was never ever ever a problem until Port Authority made it a problem."

In a press release sent out on Wednesday morning before the protest, Port Authority CEO Katherine Kelleman stated, "I want to be absolutely clear: Port Authority unequivocally believes that Black lives matter."


Kelleman's statement noted that federal law prohibits public agencies to permit employees from displaying certain messages while preventing other employees from displaying others. "If Port Authority allows uniforms to be used as a message board for some political or social protest topics, we must then allow all messages on that topic, including those that could disrupt Port Authority’s ability to deliver public transit service in a safe and efficient manner and cause harm to our employees, customers and communities," Kelleman says. "In legal terms, our policy is viewpoint neutral and simply aims to keep our transit system from being disrupted unnecessarily."

Kelleman also added that "Port Authority's uniform policy has prohibited the wearing political of social justice messages since the 1970s," and that its recent dress code amendment was added to include face coverings "since they are now part of the Port Authority uniform."

However, Craig said today that Kelleman's statement was "disingenuous at best, and it has no merit whatsoever." 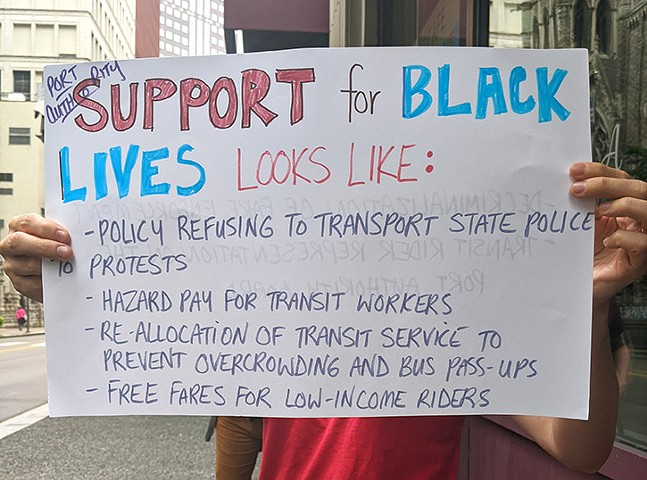 CP photo: Lisa Cunningham
A protester holds up a sign of support.
"Port Authority supports social programming and social movements," said Craig during today's protest. "As do I and the rest of my coworkers. We support the pride movement, we support Black heritage, we support the St. Patrick's Day Parade, and so does Port Authority, but Port Authority is selective in what they want to support. That, my friends, cannot happen because we’ve come too far and too long for them to be selective because what you’ve got to understand is we ride their bus, but why can’t they support us?"


"At some point in time, you have to stand up for what you believe in," Craig continued. "Some people believe that, 'Hey, this is just a fad.' This is not a fad. This is America, finally coming together as one and supporting each other. And that’s what we really need to do. And that’s what Port Authority needs to understand."

In the press release, Kelleman said that Port Authority is currently working with its uniform supplier to create new face coverings that all employees will be required to wear while on duty.

Pittsburgh's giant pickle ornament bursts, just like all of our dreams
Top Stories

Over 100 protest in Pittsburgh, calling on Pennsylvania to "Count Every Vote"